Let’s talk about paisley. It’s one of the world’s most venerable and most-travelled patterns, from Sassanid Dynasty Persia (200-650 AD) where it was regarded as a Zoroastrian symbol of life and eternity, to 19th-century Scotland, where it helped fuel the British textiles boom, to mid-60s Swinging London, where it adorned tab collars and psychedelic backdrops alike, to the frockcoats of Prince in the mid-80s; Paisley Park is in your heart, indeed, and now it can also be over it and tucked in just above it, thanks to our multi-hued paisley pocket squares and snug-but-snazzy scarves, all made in Italy from the finest wools and all featuring contrast borders to offset the “Persian pickle” – I’m particularly keen on the sky blue and navy scarf, which adds hints of cypress trees and peacock feathers to the mix, and the chocolate-orange trim pocket square, which is good enough to eat. They’re perfect for adding a splash of opium-fugged, sitar-plucking counter-cultural chutzpah to your buttoned-up winter outfit; as Prince so wisely said, there aren’t any rules in Paisley Park. 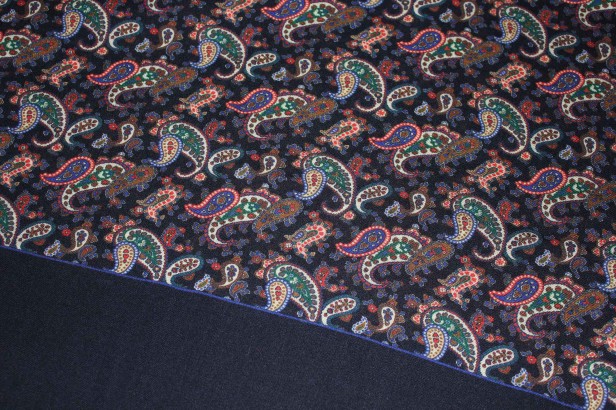