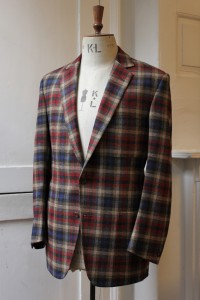 The first (brilliant, in every sense) is crafted from a Cacciopoli 100% Scottish milled wool in a 12-ounce red/blue/green/brown plaid, in a single-breasted button-1, with centre vent, patch pockets, and a two-button cuff with appropriately foxy brown buttons.

The second (a blazer, in every sense) is a Holland & Sherry 90% super-110s worsted wool/10% cashmere combo in blue with bold brown over-check, in a single-breasted button-3, with rakish angle pockets, a centre vent, and a three-button cuff with similarly stirrup-cup-ready foxy brown buttons.

I’ve always championed the check as a hip-to-be-square way of adding some dandy flair to a gent’s wardrobe, and the joy of checks goes back a long way – the word’s actually derived from the ancient Persian word “shah,” meaning “king,” from the game of chess and its checker-board pattern, but it was the Scots who really went mad for plaid; distinctive checks were created for different areas (as opposed to tartans, which belonged to specific clans), and were designed to camouflage the wearer as they hunted grouse or pheasant on a laird’s estates. These days, I’m sure you’ll agree, the resplendent plumage is the prerogative of the hunter, rather than the hunted…