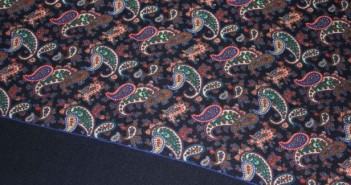 Let’s talk about paisley. It’s one of the world’s most venerable and most-travelled patterns, from Sassanid Dynasty Persia (200-650 AD) where it was regarded as a Zoroastrian symbol of life and eternity, to 19th-century Scotland, where it helped fuel the British textiles boom, to mid-60s Swinging London, where it adorned tab collars and psychedelic backdrops […] 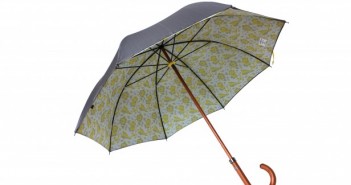 Singin’ in the Rain

Our London Undercover bespoke window installation is reaching its final few days. For those who have not yet invested in a stylish winter umbrella, now’s the time, as we are offering 20% off the Timothy Everest Spitalfields flower design between Friday 29th and Sunday 1st December. Simply log onto our shop and enter the code […]

In the Driving Seat

I’ve joined forces with British classic car company Morgan to produce a driving jacket that cuts quite the dash. As sporty and elegant as the Morgan three-wheeler they’re designed to complement, the jackets come in suitably distinctive shades of navy cotton or sage green stretch cord, and incorporate a bumper feast of features to enhance […]

One of my favourite moments in the peerless sitcom 30 Rock – and believe me, they are legion – occurs when Tina Fey’s Liz Lemon, mystified at what she sees as his misplaced function-less formality, asks her boss, Alec Baldwin’s Jack Donaghy: “Why are you wearing a tuxedo?” “It’s after six,” shoots back Donaghy. “What […]

We were thrilled to be approached by brolly specialists London Undercover to help create a unique window for their Spitalfields store. We devised a special grey herringbone umbrella design the interior of which boasts our trademark Timothy Everest Spitalfields flower printed pattern. The lining was stitched to a heavy duty steel frame, and lower half […]

One of our esteemed clients has just commissioned a rather sophisticated purpley-velvet combo which I had to share with you all. This rather suave jacket is crafted in a beautiful gabardine, and features a stunning purple silk velvet peak lapel, half moon jet pockets (complete with sprats head stitch) and carefully cut turned back cuffs […]

MY LITTLE BLACK BOOK OF MONTHLY RECOMMENDATIONS… WEAR… Keeping out the winter chills with a narrow fronted Funnel coat, crafted in Harris Tweed and sporting soft black velvet undercollar, trimmed in black leather Wearing it with… SHOP… Ladies tailoring at Superdry in Regent Street, our new ladies collection is going down a storm, with the […]

The team at Elder Street has been working on a cool 2 piece jacket and skirt combo, inspired by silhouettes from the 1940′s and 50′s. Crafted in a show-stopping red Harris Tweed from our friends at Holland & Sherry, this positively oozes industrial elegance.

If you’re in the vicinity of Elder Street this week, pop in and see our amazing Frieze-week exhibition of Sandro Kopp’s work. Fiercely Loved is a series of richly detailed oil paintings of beloved soft toys, given the resplendent Old Master-ish treatment usually reserved for royals and saints. Here, Goully (Kopp’s own treasured childhood companion), […]

I’m not knocking the unseasonably warm temperatures – I’m not in any hurry for the onset of winter’s depredations – but this early autumnal in-betweeny phase can leave us all a bit stumped wardrobe-wise; balmy enough to leave topcoats sheathed yet early-morning late-evening crisp enough to warrant something more than a lightweight jacket. That’s where […]

My little black book of monthly recommendations… WEAR… Something with a little seasonal ‘character’ such as this bespoke skull lined velvet smoking jacket Contact our team at Elder Street or our Bruton Place shop to see what ‘wicked’ things they can conjure up for the party season DRIVE… A ‘Batmobile’, this was a customised by […]

Elder Street has had its fair share of women clients over the last year, and we were thrilled to be asked to create a special evening dress for one of our esteemed customers. Worked on by Magdalena and Marija, this floor length dress more than nods to ‘Madame Vionnet’. Crafted in a dark teal silk […]