Trending
You are at:Home»The Culturist»Music»Katya Kabanova at the Royal Opera House
By Anna Selby on February 5, 2019 Music

Janacek’s Katyahas become the opera of the moment – Opera North opened their revival in Leeds a couple of days ago, Scottish Opera will launch a new staging in Glasgow next month and Richard Jones’s new version opened at the Royal Opera House last night.

Jones keeps the Russian small-town setting of Ostrovsky’s original play but updates it to the 1960s. It’s an odd choice given the religiosity at the heart of the story would never have been permitted in Soviet times – though it does give designer Antony McDonald the chance to revive some particularly hideous fashion, worn by the male leads and the chorus. 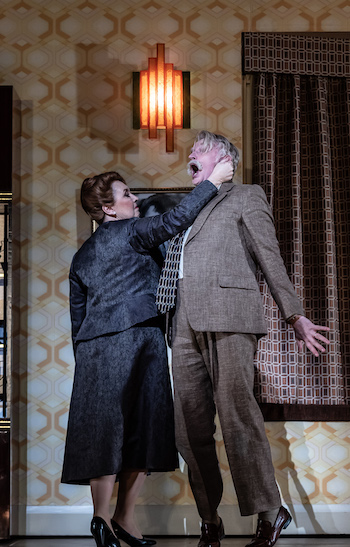 Katya is the caged bird, the fish out of water. Her portrait (as a young girl holding a pigeon) is literally a picture of innocence that hangs on the black dropcloth. When it rises, there is a long moment of silence before the music begins. The lights come up slowly revealing Katya now a young woman alone on a bench. Gradually, the chorus are revealed behind her, the men leering at our fragile heroine, the women scorning her.

Katya is indeed a pitiful creature, bullied by her monstrous mother-in-law (a magnificently imperious performance from Susan Bickley) who has never forgiven her for her beauty – or for being loved by her son. Andrew Staples is a convincing Tichon but he shows little affection towards his wife. He’s embarrassed by her neediness – there’s a marvellous tragi-comic ending to Act II when Katya tries to get into his departing Skoda. More importantly, he’s terrified of his mother and finds salvation at the bottom of a bottle of vodka.

Entirely miserable in this utterly dysfunctional home, Katya knows she is doomed and is drawn towards her undoing – and towards Boris. Almost as unhappy as Katya, he is financially dependent on his uncle Dikoj, as much of a bully as Kabanicha with whom he has a sado-masochistic dalliance – a much-needed moment of light relief in this tale of woe. Facilitated by Varvara (a vivacious and engaging Emily Edmonds) and her lover Vana (Andrew Tortise sporting wonderful Sixties moustache), Boris and Katya meet, declare their love and embark on ten days of passion while Tichon is away. 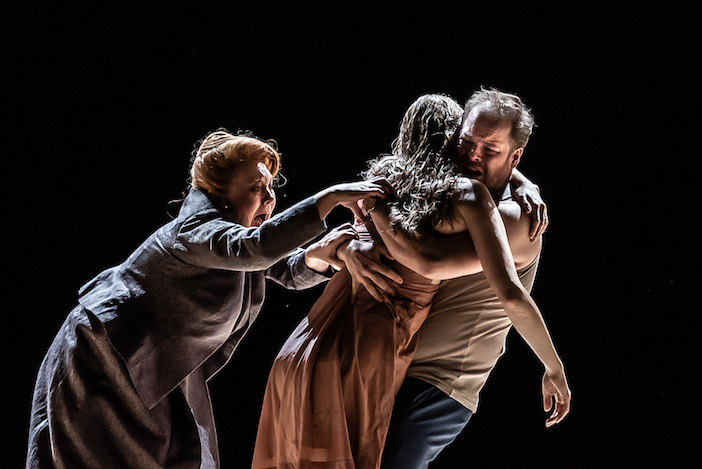 On his return, however, Katya confesses all to him – and his mother. No one saves her. Her weak husband beats her, her lover escapes to Moscow. There really is no way out now and her tormented soul, always troubled by dreams and fantasies, draws her remorselessly towards suicide. In the original setting against the wildness of the River Volga, Katya’s fate sealed by a pitiless nature and a terrifying storm.

The natural world has been replaced in this production by a vast wooden box (seemingly a de rigueur for opera sets these days) and a stainless steel bus shelter. This does little to create the atmosphere but this gap is filled by the chorus. Not only in excellent voice, they are a strong physical presence throughout and notably in the final scene where they embody the river as a stream of rushing bodies (hats off to movement director Sarah Fahie).

Under Edward Gardner, the Orchestra of the Royal Opera House finds the depth and soaring sweetness of Janacek’s music. The evening is inevitably carried, though, by Amanda Majeski, a magnificently tormented Katya with a lustrous, honeyed tone.