Trending
You are at:Home»The Explorer»Hotels»Valentine’s Day at Le Meurice
By Rebecca Lipkin on February 14, 2019 Hotels

In the words of Ella Fitzgerald, ‘I love Paris. I love Paris every moment of the year,’…but especially during Valentine’s. If Paris is the most romantic city in the world then the Dorchester Collection’s jewel in the crown, Le Meurice, is arguably the most romantic hotel and the ideal base for a suitably grown-up, extravagant weekend away.

Located within the historic quarter of Paris, between Place de la Concorde and the Louvre on the bustling Rue de Rivoli, Le Meurice is one of the capital’s original palace hotels with a splendour and opulence that defies belief. Founded in 1835 by the enterprising Charles-Augustin Meurice who began making his name and fortune shuttling wealthy British tourists from Calais to Paris before opening the hotel that remains the pinacle of luxury accommodation, it’s quite simply the crème de la crème for the crème de la crème.

Everyone from Queen Victoria who first visited during a state visit, Tchaikovsky, Rudyard Kipling, Orson Welles and the eccentric Salvador Dalí (said to have once ordered a flock of sheep to his room) called Le Meurice their base in the years that followed and stepping through the gilded revolving doors is to walk where angels fear to tread. Arriving on a bitterly cold afternoon in February more than justifies hauling up in the seductive Bar 228 and sampling the Alain Ducasse hot chocolate, as rich and decadent as the cocoa-coloured surroundings and deep leather armchairs where time seems to stand still.

If you’re there when evening jazz commences you’re probably not likely to budge, not least if you sample one of Head Barman William Oliveri’s exemplary aperitifs such as ‘Plaisir d’Amour’ featuring rum, coconut, Cointreau, lemon and grenadine. Two straws optional. Presiding behind the Carrara marble bar counter, an integral part of Philippe Starck’s overhaul, having served the likes of Sophia Loren since 1978, Oliveri knows a thing or two about the magic of le cocktail. 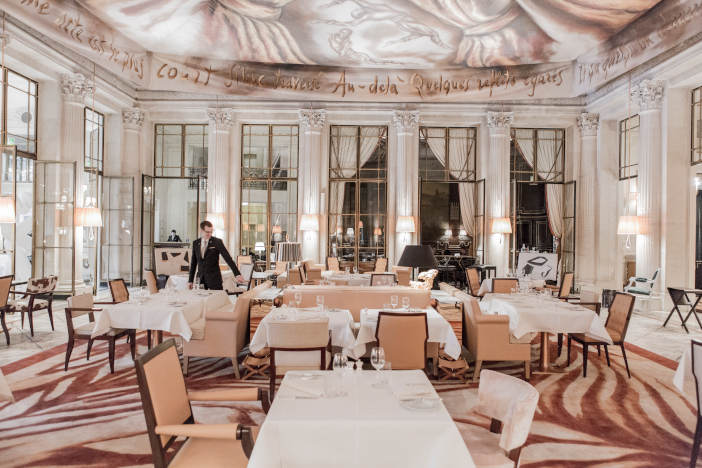 Now under the umbrella of the Dorchester Collection whose properties include the legendary Dorchester London and Beverly Hills Hotel, Le Meurice’s ever-evolving image remains at the forefront of modern art, with the ostentatious Louis XVI interiors having been embellished by the whimsicality of Starck and his daughter Ara as part of an extensive refurbishment completed in 2016. Creativity remains at the heart of the hotel’s ethos, with the Meurice Prize for contemporary art launched in 2008 to support France’s most talented young artists, offering a prize of €20,000 to a painter, sculptor, photographer, installation or video artist.

Exclusive haute couture fashion events are also held at the hotel during the bi-annual Paris Fashion week, a tradition which began with the dazzling shows of Coco Chanel held in the hotel’s Salon de Pompadour during the 1930s, so it’s no surprise that Le Meurice is reported to be the most expensive place to reside during each nine-day event with an average rate of in excess of €1,500, a mere snip to the industry’s leading designers, models and fashionistas. 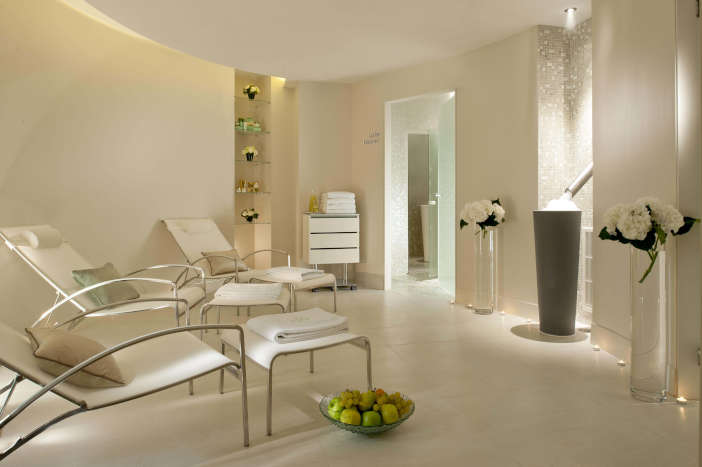 Each of the 160 guest rooms and suites, originally designed by Charles Jouffre, are intended to wow with their lavishness, though none do this more than the Belle Toile Suite with its private terrace offering a 360 degree view of the city, or the Presidential Apartment the room occupied by Dalí for so many years and decorated in the taste of Versailles. Wildly immodest, every inch from the upholstery to the curtain fabrics is thrillingly sumptuous, with one eye on the past and the other very much on the future. Our spacious suite, with magnificent views of the Tuileries Garden, a marble bathroom stocked with Penhaligon’s, a mini-bar suitably filled with Krug and enough wardrobe space for a month of elegant living and dressing for dinner, was surely designed for those who don’t intend to sightsee?

The only possible reason for leaving your room during the day is to venture to the Spa Valmont for a couple’s ‘Cocooning Tea-Time Ritual’; an hour-long relaxing massage featuring orange blossom and essential oils, downtime in the sauna and hammaam, followed by afternoon tea in the glamorous Restaurant Le Dalí where you’ll find Murano-based artist Aristide Najean’s glass pieces, such as drops falling from lamps. 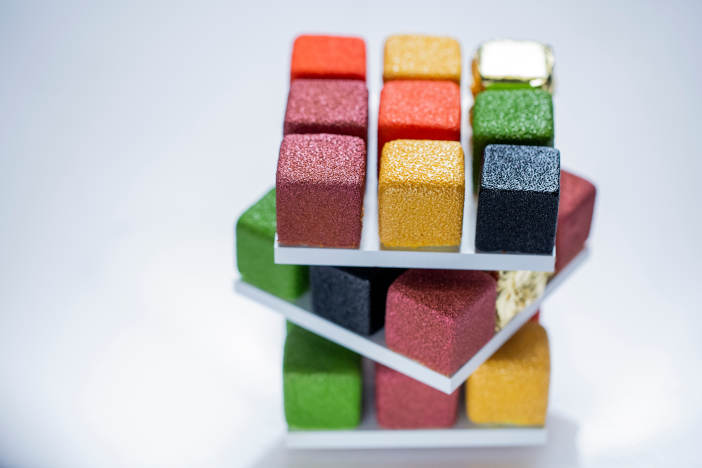 Cédric Grolet’s has meanwhile established a cult following as Executive Pastry Chef of Le Meurice and ‘World’s Best Pastry Chef’ in this Instagram-age due to his pioneering techniques and designs such as Rubik’s Cube and fruit-shaped cakes, alongside highly imaginative interpretations of French classics. From Paris-Brest to Saint Honoré and the best madeleines, eye-watering queues of French and international patisserie-lovers are prepared to wait hours for one of his masterpieces available at the hotel’s recently opened take-away patisserie shop, La Pâtisserie du Meurice by Cédric Grolet (open from noon until they sell out), although personally I’d rather enjoy my cake in true Marie-Antoinette grandeur.

Dining at Restaurant le Meurice Alain Ducasse is another fine reason to leave your suite; as ostentatious as the gilded, fresco-adorned dining room inspired by Le Salon de la Paix at Château de Versailles would lead you to expect, discreetly screened from the understandably curious passers-by on Rue de Rivoli. This restaurant alone might persuade London gastronomes to hop on a Eurostar in time for lunch, in fact I know someone who does just that, although perhaps a private jet is a more suitable mode of travel for a destination such as this.

Holding two Michelin stars, Le Meurice Alain Ducasse is the ultimate gourmet experience, with white Starck swivel chairs a welcome contrast to an otherwise incredibly formal atmosphere, as are the front of house team who greet you like an old friend and waste no time in suggesting a glass of champagne. My kind of pals.

Head chef, Jocelyn Herland, who arrived from the Dorchester in 2015, has adhered to Ducasse’s core philosophy whilst injecting a modernity reflecting the changing attitudes towards fine dining in the culinary temple that is, and always will be, Paris. From a starter of scallops with celtuce and gold caviar, to a main of Brittany lobster accompanied by black garlic and a dessert of baba with your choice of rum, the most celebrated ingredients on the planet are elevated into the stratosphere. Breakfast is also served in these grand environs and boasts full waiter service who attend to your every whim with croissants and bakery items you assuredly would queue for if you had to. 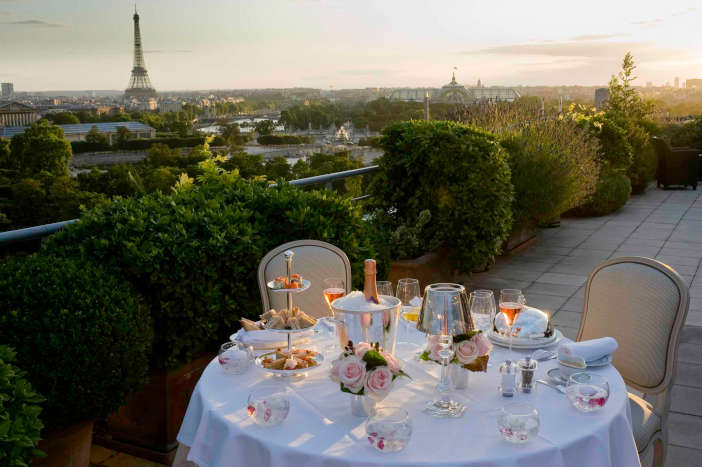 If you’re lucky enough to stay at Le Meurice for more than a night, at least one should be devoted to lounging about in your palatial suite and ordering room service. An exemplary 24-hour menu featuring signature dishes from the entire Dorchester Collection means you can enjoy all the joys of fine dining whilst sporting a white fluffy monogrammed robe, the epitome of indulgence and five star living. Order up the famous McCarthy salad a la Beverly Hills Hotel and a bottle of the finest after a long soak in the marble tub, a marriage made in heaven on Valentine’s Day.