Trending
You are at:Home»The Explorer»Travel»Notes from a Small Island
By Lucy Shaw on January 1, 2015 Travel

Happy New Year one and all! As the first post of 2015 we thought we should dispense with the token shots of Big Ben or Sydney Harbour Bridge lit up like, well, New Year’s Eve. Rather, as the customary drizzle settles in in London, we turn our attention to something we’re really casting our minds to…the year’s first holiday. And Lucy Shaw has it all sewn up…

Like a snapshot frozen in time, the island of Bequia is how I imagine the Caribbean used to look before tourism took hold in earnest. Meaning “island of the clouds” in ancient Arawak, Bequia has a rugged beauty and rough around the edges charm that separates it from the pristine perfection of neighbouring Barbados and St Lucia. At seven square miles and just under 5,000 inhabitants, Bequia is the second largest island in the Grenadines and one of the only places in the world where whaling is still permitted. Islanders are allowed to catch up to four humpack whales a year using a hand-thrown harpoon, though the target is rarely reached.

After an interminable carousel of trains, planes and automobiles, my home for the next three nights is Bequia Beach Hotel, run by a sandy-haired Swede called Bengt Mortstedt, a local legend known to the islanders as “Mr. Bengt”. A property tycoon by trade who divides his time between London, Stockholm and Bequia, exploring the island with him is an experience. He’s given a hero’s welcome wherever he treads by wide-eyed locals, as if the messiah were returning to roost. Fishermen and coconut sellers stop to shake his hand, their smiles as wide as the Mississippi. It must be marvellous being Mr. Bengt in Bequia – I can see why he spends half his life here. 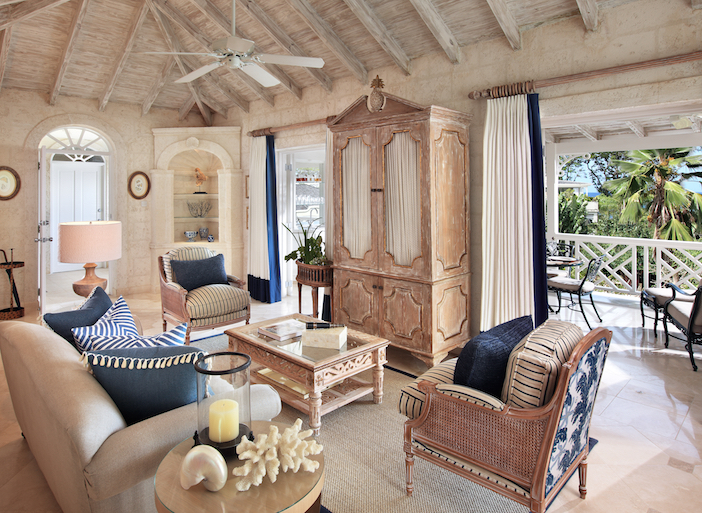 Also hanging on the bedroom walls are annotated maps of the Caribbean and intricate insect sketches in black ink. Wooden ceilings are bleached white, while slow-turning fans, antique suitcases, palm tree pillows and bamboo beds add to the colonial feel. Bengt is something of a magpie and frequents antiques fairs, flea markets and charity shops around the globe in search of trinkets for Bequia Beach. “My aim was to build an old fashioned beach hotel that doesn’t exist anymore. I want my guests to have the feeling of stepping back in time to a more elegant era of travel. I’m in the industry of imagination – I sell dreams,” says Bengt of his rose-tinted vision.

My spacious room overlooks the ocean. From a distance, the wooden thatched umbrellas lodged in the sand look like the ones you’d find prettifying a Piña Colada. The sea is an urgent shade of aquamarine and the pace of life tortoise slow. So slow in fact, that it forces you to modify your urban impatience. After a day or two the knots begin to loosen and the need to stay connected loses its relevance. Proving just how disconnected the island is, on ordering a Mojito at the bar, I was told that the cocktail was off the menu as the hotel had run out of mint, which would require a boat trip to the mainland to remedy. I went for a Mai Tai instead, a cocktail I’d never order in London but was joyful when sipped in the sunshine beside a sparkling sea. Food in the main restaurant, Bagatelle, is simple with local twists. Lobsters are doused in lime, shrimps bathed in coconut and conch whipped into creamy chowder. Red snapper meanwhile, is largely left alone, allowing its saline flavour to sing, while local vegetable christophine is transformed into a thing of beauty akin to potato dauphinoise via lashings of cheese and butter. 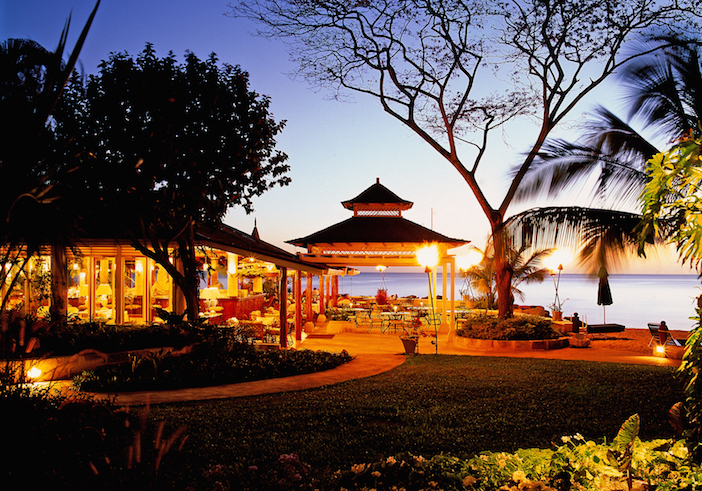 Spending Christmas in the scorching heat is an odd experience. We celebrated by visiting a popular local haunt for lobster pizza. Served in door stopper-thick slices oozing with molten mozzarella, each triangle was loaded with indecent amounts of meat from the pink pincered creatures. Lobsters are two a penny in Bequia – such is their abundance that the islanders think nothing of demoting it to a pizza topping, much to our benefit. Hopping from Bequia to Barbados the next morning, we arrive in style in a six-seater private plane that affords us jaw-dropping views of the hideaway we’re leaving behind. The second leg of the trip takes us to the Coral Reef Club in Barbados, which has been owned and run by the affable O’Hara family for the last 60 years. Spanning 12 acres overlooking a manicured beach, the hotel is dotted with coral stone cottages and set within lush gardens that perfume the air at night. Fresh flowers add feminine fragrance to the hotel’s 88 rooms, which include two private villas and five plantation suites.

Very few things in life beat the exquisite feeling of opening the door to a hotel room and discovering you’ve been given a suite. The pleasure is significantly heightened if said discovery comes after a sticky journey. Tastefully handled by Helen Green Design, my palatial dwelling boasted a king-sized bed strewn with plump pillows, a writing desk complete with nostalgic pale blue Airmail paper, a private terrace, boudoir, its own bar stocked with decanters of gin, rum and whisky, and a sizeable plunge pool. The TV was cleverly hidden in an armoire, while the shell-strewn bathroom housed a gigantic sunken tub, church candles and two Corinthian columns. Donning my blue and white striped bathrobe, I padded about the marble-floored space like a post-coital Cleopatra. The cosy interiors suggest a stay at a rich aunt’s beach house, with colourful kingfisher drawings in frames and giant strands of coral placed behind glass. I’m told the suite is often occupied by Lady Sainsbury – Lord Sainsbury sleeps in the suite next door as he snores. 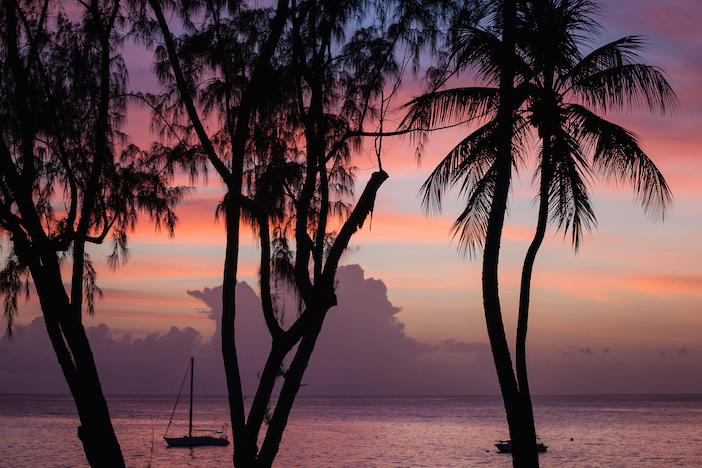 Settling in, as the sun sets I order the hotel’s candyfloss pink signature cocktail – a twist on a Piña Colada featuring amaretto and grenadine. Like the Mai Tai at Bequia Beach, Piña Coladas go from tacky Tiki drink to Caribbean dream when enjoyed by the beach watching the vanilla sky deepen into 50 shades of sherbet. At Coral Reef’s sister site, The Sandpiper, we’re treated to accomplished cooking from head chef Christophe Poupardin, including decadent creamed gnocci with braised duck, and fat coconut-battered shrimps that would make Bubba from Forest Gump weep with joy.

The signature scent at Coral Reef Club’s spa is lemongrass, which has been captured in candles on sale at the shop. My massage was on the right side of firm and involved being slathered in an invigorating oil blending lemongrass, ginger and peppermint, leaving my skin good enough to eat. During a visit to St. Nicolas Abbey rum plantation the following day, we drive through 400 acres of sugar cane so overwhelmingly tall; I’m given an ant’s view of the world. Dwarfing the workers below, it’s a wonder the giant shards don’t topple over under their own weight. Dating back to 1658, the distillery is home to loquacious cockatoo Lance, who had gnawed off sizeable chunks of his salmon-pink plumage in a bid for attention. Aged in Bourbon barrels and bottled in elegant decanters, St Nicolas’ 15 year old rum boasts notes of vanilla, toffee, caramel and toasted almonds. 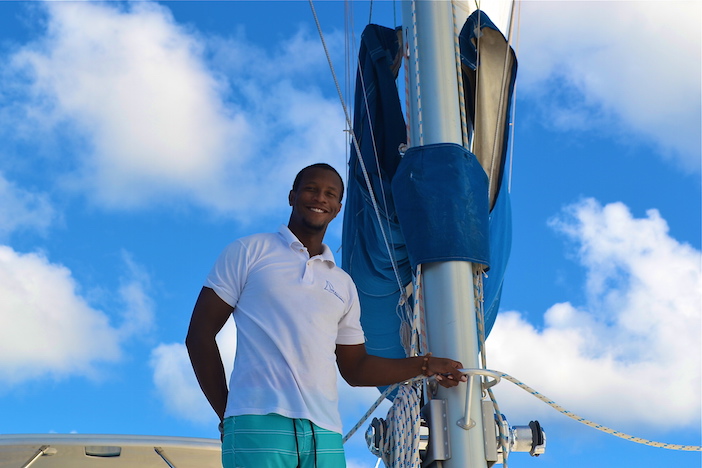 On our final day at Coral Reef we’re taken out on a catamaran into sparklingly clean, Listerine-blue waters so perfect, they look like they’ve been Photoshopped. Our first stop is a shipwreck dating back to 1918. We all don snorkels and canary yellow flippers and descend into the lukewarm big blue. Life under the sea is eerily quiet and the hulking mass of rusting iron spookily beautiful, like a silent hymn to lost life. Floating through the wreckage, I notice swarms of electric blue fish dwelling deep within its crevices, as if using the wreck as their home. A few brave souls delve into its decaying innards, sending up jets of bubbles that envelop me like I’m trapped inside a giant Champagne flute.

Coming up for air, we all climb aboard and carry on slicing through the ocean. Soon we stop again, this time to swim with turtles. Diving into the sea en masse, I’m amazed at how relaxed the creatures are about our arrival. They glide past us nonchalantly, a few so close I can stroke their shells. Their pace is languorous, their expressions sanguine. Back on board, we sip rum sours as the sun sets. Tomorrow we’ll be a world away, back to bone-chilling temperatures and the bustle of the urban jungle. But for now we’re in paradise, keen to lap up every last second of the warm wind on our cheeks and the salty air in our lungs. The boat pulls into the harbour but we all sit still for a final few minutes as if committing the day to memory, none of us quite ready to head home.

British Airways flies daily from Gatwick to Barbados. Fares start from £495 return including taxes and fees. To book visit ba.com