Trending
You are at:Home»The Explorer»Travel»The Nile Cruise
By Anna Selby on October 29, 2014 Travel

It conjures up images of adventure, antiquity and Agatha Christie. More romantic than the Danube, more exciting than the Caribbean, Anna Selby steps on board possibly the most iconic cruise of them all…

There are some trips that have become classics by virtue of having been the backdrop – sometimes more the foreground – of numerous books and films. One of these has to be a Nile cruise. You’ve seen those reeded river banks, red-sailed feluccas, sphinxes and obelisks so often, you surely know that film set already? But, to be honest, Egypt deserves to be a star of screen and fiction. It would be hard, in fact, to find anywhere that could beat this as a destination: the soaring Temples of Karnak and Luxor, the still vibrant colours of the wall paintings in the Valley of the Kings, the poignant sight of the small mummified body of the boy king, Tutankhamun, still in his tomb more than 3000 years after he was first laid to rest there. If you’re looking for majesty and the bitter-sweetness of lost civilisations under a clear blue sky, look no further.

I arrived in Luxor in early March when for us Brits, the temperatures are already pretty warm (above 30C by mid-day). For the Egyptians, this is still winter but they arrange all the sightseeing for the cooler mornings and evenings – which means afternoons can be spent basking in the sun on the top deck of the Royal Viking river boat, making for a pretty well perfect combination of activity and relaxation.

The boat moors for two days in Luxor – and you could easily stay longer given how much there is to see. Luxor is famed for its two colossal temples, Luxor and Karnak, both filled with sphinxes and statues, obelisks (this is where London’s Cleopatra’s Needle came from), soaring columns and intricately carved hieroglyphics that tell the stories of the gods or glorify great kings. 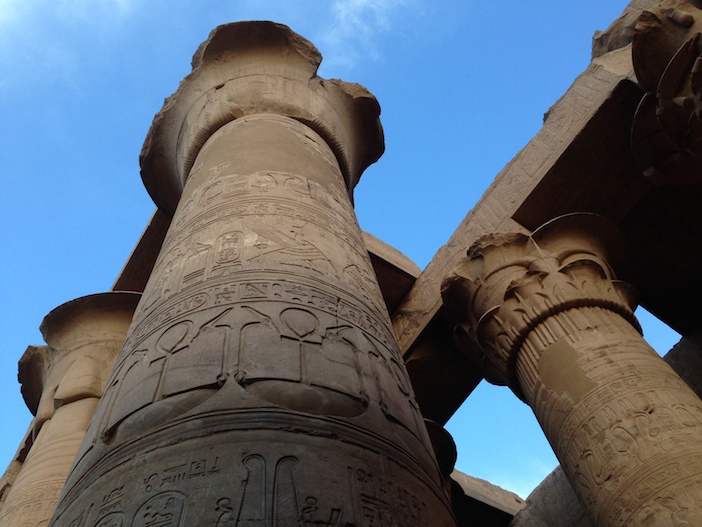 This is where our guide (he is actually an archaeologist) comes into his own explaining not only how these extraordinary buildings were created in the first place but drawing us into the mysteries of a fascinating culture, telling the stories of its ancient religion and painting a vivid picture of the everyday life of the Egyptians of 4000 years ago. He shows us the friezes that celebrate the many battles won by the Pharoahs, and points out one entire wall devoted to the great annual festival held to ensure the flooding of the Nile. The Statues of Amun-Ra (the sun god), Mut (goddess of war) and Khons (the moon god) were sailed down the river to Karnak. The Pharoah and his family went too, accompanied by priests, musicians and dancers and they process across the centuries playing instruments, making sacrifices, sailing their boats.

It is hard to take in the sheer scale of these buildings and you do need to go twice – once in the day to see everything and then again at night for a magical Son et Lumiere show. These complexes are huge but there is still more to revealed – the Avenue of the Sphinxes (all 1350 of them) is being gradually uncovered linking the two temples again over a distance of 2700 metres after at least two millennia hidden beneath the sand. 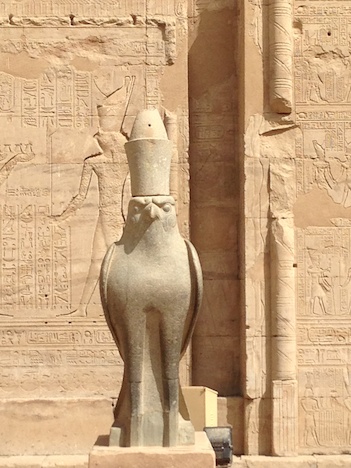 And, amid all this splendour, you get an unexpected benefit. While you don’t get the place entirely to yourself, it is remarkably empty. Tourism in Egypt has dropped by around 90% and, like many places that experienced the Arab Spring, is suffering badly from a lack of visitors. The Egyptians have increased security to reassure the tourists (in fact, you’re likely to get an armed escort) but it’s still remarkably quiet just now.

If my first day in Luxor has been devoted to the land of the living (personified by the rising sun on the east bank) with its grandeur and political power, the second is devoted to the west bank, representing the setting sun and the dead: the Valleys of the Kings and Queens, the Temple of Hatshepsut and the Colossi of Memnon. This is a different world from bustling Luxor. Rural and quiet, the intensive agriculture stops suddenly at the margin of the Nile’s flood and a starkly beautiful desert begins, with rock and sand so white it dazzles the eyes. This is where the pharaohs were buried, their tombs hidden to protect them from robbers. Almost all, though, were looted and Tutankhamun was very unusual in still having his burial goods with him when his tomb was opened by Howard Carter in 1922. The treasures are now, of course, in the Cairo Museum so it comes as a surprise to discover that the mummified body has been returned to its tomb, the shrivelled face still displayed in its glass case.

The next day we set sail and drift slowly down the Nile, past farmers leading their laden donkeys or fishermen sitting still as herons waiting for a catch. It’s an unfolding panorama of a timeless way of life and you could be looking at a scene from biblical times. However, be prepared once you set foot on dry land to relinquish tranquillity and run the gauntlet of traders selling alabaster statues, papyrus bookmarks and scarves (some of them very pretty) and all the Tuts and scarab beetles you could ever possibly need. 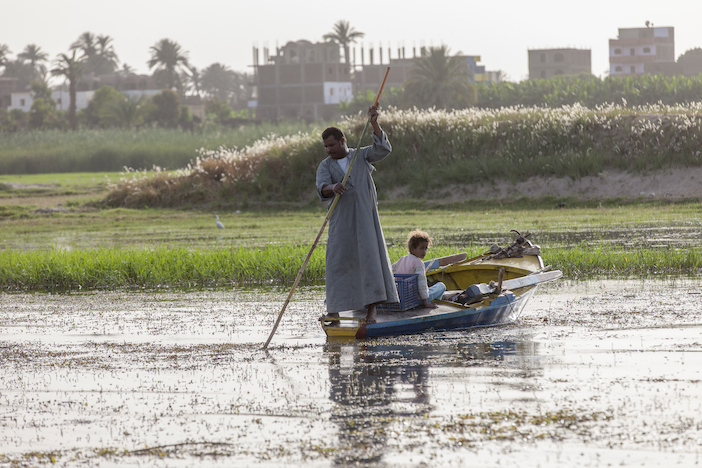 In fact, you don’t even have to wait for dry land – nowadays the traders come to you, even if you’re on a ship. Rowing frantically from the shore to catch up with our boat, they tie themselves on to our side in a scene that looks like something from Captain Philips but is dangerous enough for them to end up as a Death on the Nile. Once tied up, they throw tablecloths and galabiyas on to the boat. If you want to buy, you throw the money down to them. A precarious way to make a living (in every way) but surprisingly it seems to work. Certainly, they’re patient enough and stay tied up to us for more than an hour, one unrolling his mat to pray on his tiny craft.

Other locals are welcomed on board for evening entertainment – a belly dancer and a whirling dervish – another night, it’s a shisha pipe on the dock, or a stroll along the promenade in Aswan mingling with the locals. The last night is Egyptian Party Night – you wear a galabiya (£7 from the onboard shop) and join in silly games, including a belly dancing competition. You have been warned. 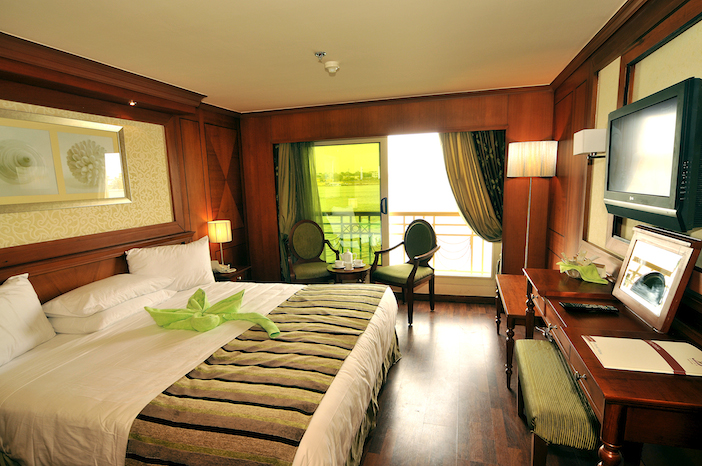 The Nile continues to unfold its wonders for the rest of the trip – the Temples of Horus and Kom Ombo, the mighty Aswan dam, sailing in a traditional felucca. And now is the perfect time to go – no crowds and plenty of bargains to be had – and you can actually take a photo of a sphinx rather than a hundred tourists gawping at it!

EGYPTAIR is the national airline of Egypt and a member of Star Alliance since 2008. One return flight weekly (Monday) to Luxor from Heathrow starts from £350. EGYPTAIR has 14 flights weekly to Cairo from Heathrow and 5 flights weekly from Manchester to Cairo (excluding Monday and Wednesday). For more information, please visit: www.egyptair.com