Trending
You are at:Home»The Culturist»Film»Under the Skin
By Tom Bangay on March 26, 2014 Film

Michael Faber’s 2000 novel, Under the Skin, concerned an alien called Isserley who roved Earth at the behest of her employers, a wealthy corporation, looking for hitchhikers to capture, drug and send back home. There they’d be fattened up and fed to aliens, human flesh being a delicacy on other worlds.

In Jonathan Glazer’s 2014 film adaptation of Under the Skin, almost all of these details are left to the viewer’s imagination. That the main character, without a name but played by Scarlett Johansson, is an alien, is almost entirely relayed by implication; the exact process to which her victims fall prey is unclear, the reasons for it are never given and the ultimate destination of the human remains is never explained. Instead this is an intensely moody and fairly experimental piece, with sparse dialogue and lots of strange and troubling shots of something and nothing: once the core concept is established it plays out with little concession to conventional storytelling.

As a mood-driven, formally experimental piece of cinema that hangs itself on lingering shots of its A-list star’s face, it actually has a lot in common with Nicolas Winding Refn’s Only God Forgives, a film which failed completely and caused only annoyance, hostility and boredom. The similarities end there. While Under the Skin perhaps doesn’t succeed as a coherent 107-minute film, it does succeed in conjuring up some seriously dark and unsettling scenes, which are quite mesmerizing to watch. 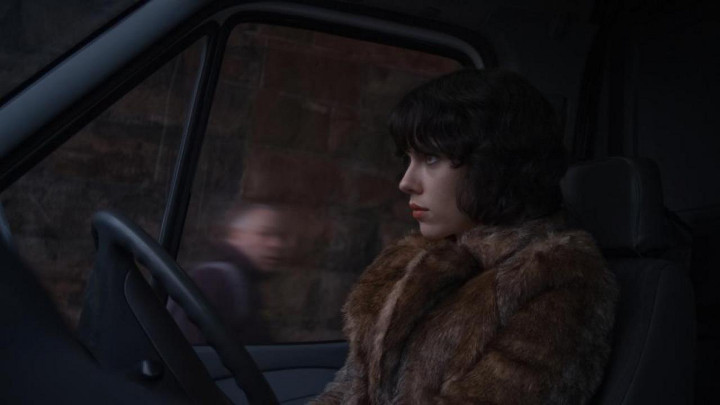 A large portion of the film consists of Scarlett Johansson driving round sketchy areas of Glasgow in a transit van, trying to pick up men. Not as easy as it sounds, by the looks of things – some of the men who appear on-screen were approached with no knowledge that a film was being made, and as such some of the rejections she encounters are real. She has a mysterious motorcyclist handler, who follows her around and cleans up the mess when interactions with humans start to go awry. Johansson makes a good alien – there’s something decidedly unnatural about the way she stands – and her understated but unsettling reactions to the world around her give an authenticity to the idea of someone wearing a skin, and not quite understanding why people respond to it the way they do.

The sound design is outstanding, with clever use of the seductive, percussive theme that appears when a victim is about to be ensnared. This is the director who gave us possibly the greatest advert of all time, the pounding ‘Surfer’ ad from Guinness back in 1999, and in its best moments the film similarly marries meticulous and intrusive sounds with hypnotic and haunting images. There’s an early set piece on a beach that plays out with heartbreaking cruelty, and perhaps the most affecting moments of all are those that reveal, unflinchingly, the atrocious physical fate that befalls those poor lonely men. Between such high points the film does meander a little, and its dark, unfriendly tone might serve to isolate the odd viewer. All in all I can’t honestly say it hangs together perfectly – certainly not as the erotic thriller it has occasionally been described as – but it’s a riveting watch all the same with a fine central performance from Johansson.

Under the Skin, directed by Jonathan Glazer. Currently playing in cinemas nationwide.