Trending
You are at:Home»The Culturist»Theatre»What an Adventure: Travels with My Aunt
By Abra Dunsby-Sircana on May 13, 2013 Theatre

Graham Greene’s classic comedic novel tells the story of dahlia-tending, former bank manager Henry Pulling, who is dragged out of a suburban existence and onto a life-changing journey of adventure and discovery after meeting his aunt Augusta at his mother’s funeral. Giles Havergal’s 1989 stage adaptation is a wonderfully camp and breezy affair in which all characters are performed by four male actors, who chop and change between roles to bring a sense of chaotic hilarity to the play’s proceedings. 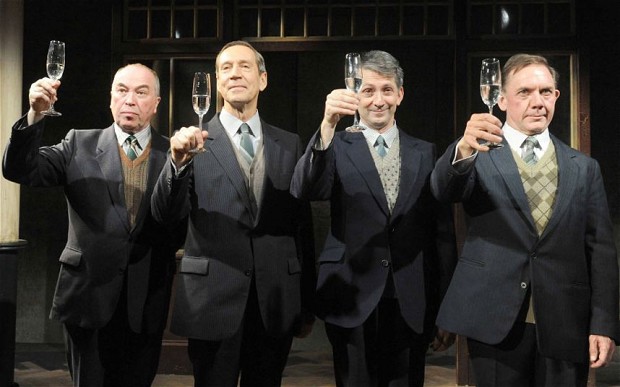 Christopher Luscombe’s current production of Travels with my Aunt at the Menier Chocolate Factory is vivacious, frivolous and fun. At times, though, it has the whimsical air of a student production about it; Colin Falconer’s stark and dimly-lit set remains largely unchanged throughout, whilst the slapdash use of props – such as the waving of a national flag to denote Henry and Augusta’s arrival in a new country – are drawn attention to for their shambolic comedic effect.

Nevertheless, it is the undisputable strength of the acting from the small but excellent cast that provides the production with a sense of polish and finesse. Jonathan Hyde is coquettish, enigmatic and hilarious as the ever-eccentric Aunt Augusta, and through subtle but marked gestures – such as a tendency to clutch at his neck – Hyde renders her with a complex character defined by her fragility, strength and dignity. Despite being a rather shady figure, outrageous Augusta’s amorality is depicted with affection, innocence and humour – if only there were more Augustas in the world. Iain Mitchell is booming and endearing as Augusta’s devoted Sierra Leonean manservant Wordsworth, although at times both his acting and his accent are slightly overdone. David Bamber is captivatingly energetic on stage, and he delights in his depiction of several adolescent female roles, as well as in his performance of Henry, the ultimate unlikely hero. Gregory Gudgeon is sadly underused, yet he entertains with his renditions of some of the more ridiculous minor roles, ranging from a wolfhound to an Argentine bodyguard. 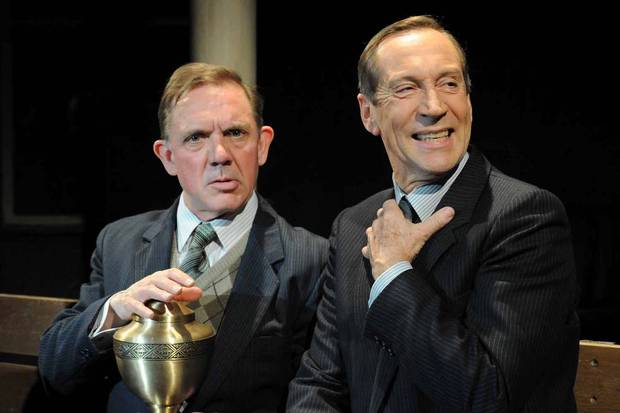 As the play unfolds, we witness Henry’s own personal metamorphosis. At first a stoic, judgmental and unadventurous man, Henry is transformed through his relationship with Augusta and by the experiences of his journey, which include him smoking a joint, falling in love and being sent to prison. It is in fact the banality of Henry’s former home life that is revealed to represent a metaphorical imprisonment; his newfound penchant for risk and emotion is portrayed as highly favourable. As the action progresses Henry is forced to reassess his judgment of Augusta’s life choices and his own, concluding that his aunt has done “nothing as wrong as thirty years in a bank.” Greene’s own message about existence and morality rings loud and clear in its appeal to the audience; defy convention, revile conformity and just live a little.

Despite being performed by four middle-aged men in identical grey suits, this production of Travels with my Aunt is certainly not lacking in personality. In fact, what is so charming is that in amongst all the hilarity and the glamour of the voyage, the acting troop delivers a subtle level of poignancy that adds weight to the characters and their story. In the final scene, Hyde and Mitchell dance together as Augusta and her reconciled love Mr Visconti; like the production itself, it is guaranteed to make you chuckle, but it will no doubt tug on the heart strings too.