Trending
You are at:Home»The Culturist»Vikings: Life and Legend
By Toby L. White on March 5, 2014 The Culturist

As the British Museum opens its Sainsbury Exhibitions gallery, what better way to inaugurate the new space than by filling it with the frame of a Viking longboat. Larry goes along to satisfy childhood dreams at the new Vikings: Life and Legend exhibition.

I’ve always had a fascination with Vikings. Of all the Asterix books, Asterix and the Normans (though, technically, they should have been Norse) was always a favourite. And watching Jan-Pal Sigmarsson declare ‘I am the Viking!’ as he flattened Geoff Capes for the title of World’s Strongest Man resonates as one of those iconic TV moments. Although, as an Icelandic, the late Jan-Pal might be dismayed to learn, as I did this afternoon, that Iceland wasn’t so much an indigenous Viking land as one conquered by them. Still, he could have been descended from one of the conquerors. And who could forget Kirk Douglas, Tony Curtis and a grizzly Ernest Borgnine in the hammy Hollywood depiction from 1958 entitled, simply, The Vikings. By Odin, it’s captivating stuff. 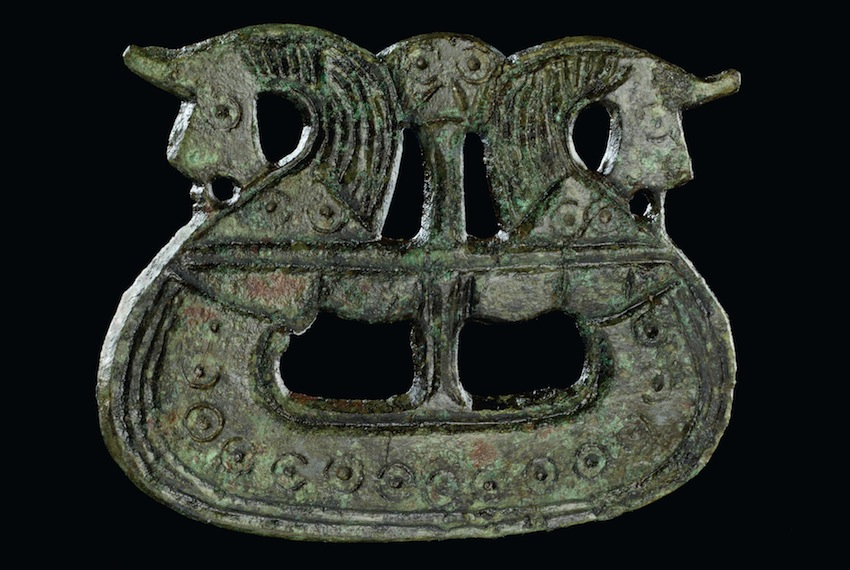 Latterly, as boyhood enthusiasm gave way to passing interest in adulthood, the opportunity to visit Stockholm and Oslo was accompanied with a resurgent enthusiasm that here I might see Viking culture in all its snarling glory. Except I didn’t. I knew by then that the image of them being marauding berserkers had been largely dispelled but it was the seeming lack of any real weight given to the culture in these, their home countries, that was probably more disappointing. Oslo has a magnificent museum of two longboats and other artefacts, certainly, but the exhibitions are somewhat sedentary. And Stockholm’s ‘Viking’ section in its history museum was virtually non-existent – it was, admittedly, under renovation – bar a disproportionately large display of swords, a model of a Viking village and a little too much dedicated to their agricultural pursuits. Agriculture? Vikings?! In all, the museum seemed more interested in dedicating a floor to medieval altarpieces. Imperial guilt, perhaps?

Hitherto denied a real immersive Viking experience, my boyhood fantasies are finally fulfilled by the British Museum’s brilliant Vikings: Life and Legend, which opens this week. Following in the footsteps of Pompeii and Herculaneum, their highest recorded visited exhibition to date, the Vikings’ is no less spectacular, well conceived and historically enlightening in equal measure…and what’s more, it restores my faith in the understanding that Vikings could be rabid, axe-wielding psychopaths. At least when they needed to be. 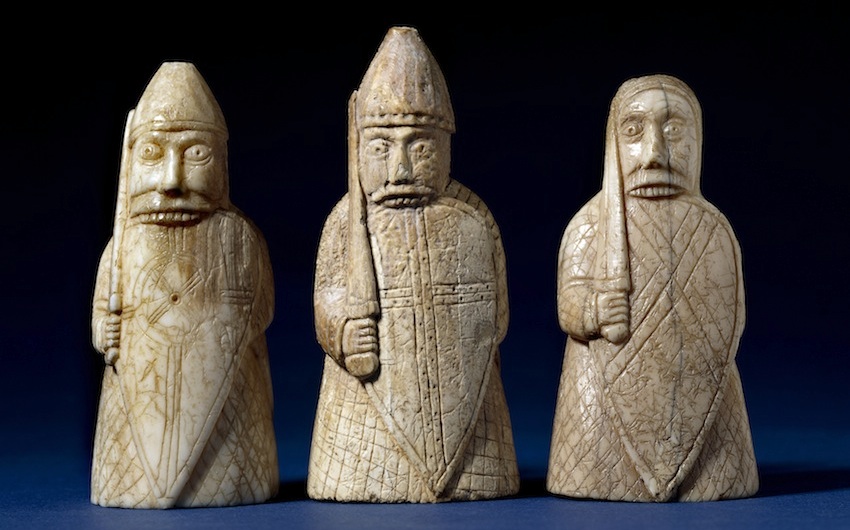 A joint project with National Museums in Copenhagen and Berlin, Vikings: Life and Legend, portrays a constantly changing story. “The exhibition aims to look at the Vikings in the wider context,” explains exhibition curator, Gareth Williams, “Viking means two very different things; in its original meaning in old Norse, it means ‘pirate’ or ‘raider’, so the conception that most people have is precisely that and entirely justified, but it’s not the whole picture and we’ve come to use ‘Viking’ today in a much broader sense, of the whole of Scandinavian society in the period roughly 800-1050AD. So ‘Vikings’ have that double-meaning. Unfortunately, if we called it Late Iron-Age Scandinavia and Those Parts of the World that Scandinavia Came Into Contact With: Life and Legend we probably wouldn’t really get many visitors.”

“Undoubtedly, they were raiders,” Williams explains, “the physical impact they had in destroying churches and monasteries was a shock at the time but it’s not that Vikings were unusually violent, more that they were attacking Christian churches…most of our sources from that period, oddly enough, were written by Christian monks, so it’s easy to see how they might be biased. Up until the 1960s and ’70s, that was the dominant view of what Vikings achieved. Since then historians have taken a much broader view and have, sometimes, gone a bit too far in the opposite direction, the more ‘fluffy’ approach, emphasising their skills as traders and craftsmen to the exclusion of that war-like side. In fact, they’re both raiders and traders. As the latter, they developed a trading network that was unparalleled and this is the fundamental achievement of the Vikings and the underlying theme of this exhibition; that they created an unprecedented global network of contacts and influences.” 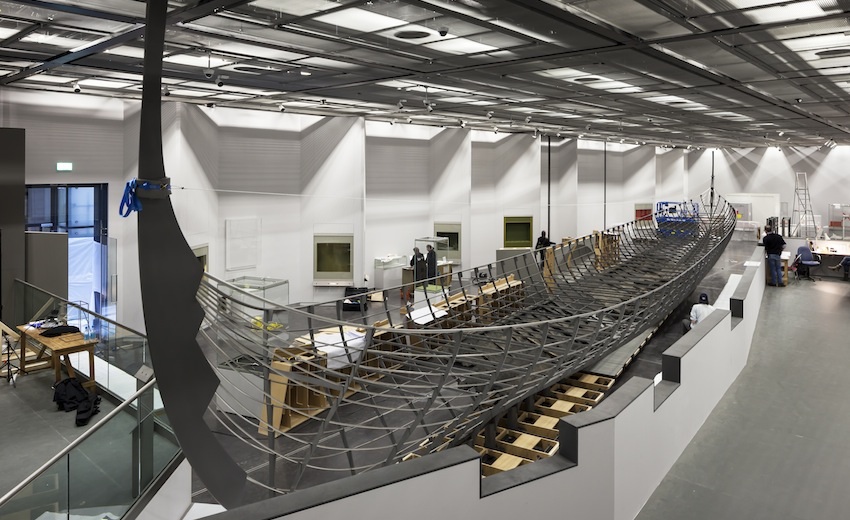 They travelled as far west as eastern Canada, as far east as central Asia and as far south as North Africa. It’s their ships that enabled them to do this, and it is the ships that form a thread throughout the exhibition. As one enters, one encounters one of the smallest artefacts; a small copper brooch in the shape of a double-headed longboat. It’s an appetiser to what culminates in the centrepiece of the exhibition itself; the largest Viking ship ever found to date, coincidentally excavated from the Roskilde fjord in Denmark during work to develop the Viking Ships Museum. So big was this ship that archaeologists thought they’d discovered the remains of two. Unfortunately, only 20% of it survives, the rest of it is suggested by a 37-foot steel frame that virtually stretches the diagonal of the main exhibition space but which gives an indication of the sheer size of the original vessel. “It’s not just a physical centrepiece,” Williams says, “but a conceptual one, that underlying theme of cultural contact and interaction that goes throughout the entire exhibition…is one of Viking ships and seamanship.”

From transportation the exhibition moves on to the theme of communication. The Vikings were not all about conquest for conquest’s sake; the notions of ‘raid and trade’ were interdependent and they learned from their travels and exchanged ideas, adopting economic systems – coinage, weights and measures from the Islamic world, for example – religious thought, literacy and artistry. Their motive was the pursuit of wealth and as their trading became increasingly sophisticated so too did their wealth, displayed in the exhibition by some remarkable exhibits; the Hiddensee hoard from Germany, for example, features an ornate gold brooch and several intricately-worked cross pendants, and a woven gold necklace weighing 2kg suggests it’s not just contemporary society that has a thirst for discomfort in fashion. The Gripsholm runestone from 1000AD runs an inscription which best encapsulates the Vikings’ legacy, “they journeyed boldly, went far for gold, fed the eagle out in the east and died in the south in Saracenland.” 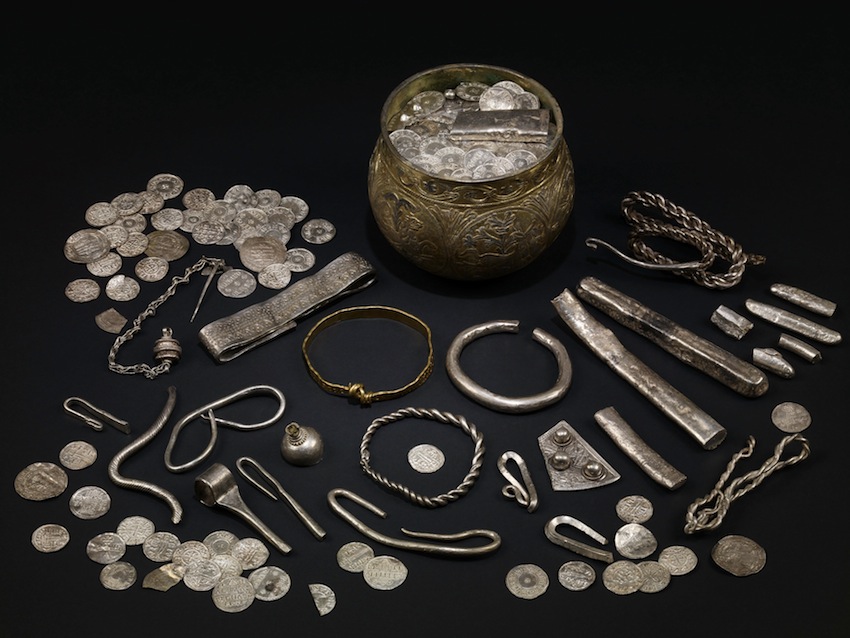 Being the first significant Vikings exhibition at the British Museum in 30 years, it features several new archaeological finds which have translated themselves into a better understanding of Viking culture, many of which are being exhibited for the first time; the Vale of York hoard is displayed in its entirety since it was discovered in 2007. Regarded as the most significant find for over 150 years it features silver coins and jewellery as far-reaching as Ireland to Afghanistan; it revealed the true extent of the Viking network and has done more to inform our understanding of Viking culture than any other find since Cuerdale in 1840. Represented in that one single collection are three belief systems (Islam, Christianity and the worship of Thor), several countries and seven different languages.

There are further revelations which open up Viking history, dispelling many a myth; one of the final exhibits is of a Viking burial, found near Weymouth, of some 40 decapitated male skeletons, the crew of a single ship dating from a period of their most active marauding on the English mainland, and which shows that the Vikings weren’t always the victors in their raids. The fact this burial was found in 2009, at a time when plans were already drawn up for the exhibition, shows how current and dynamic Viking history still is. 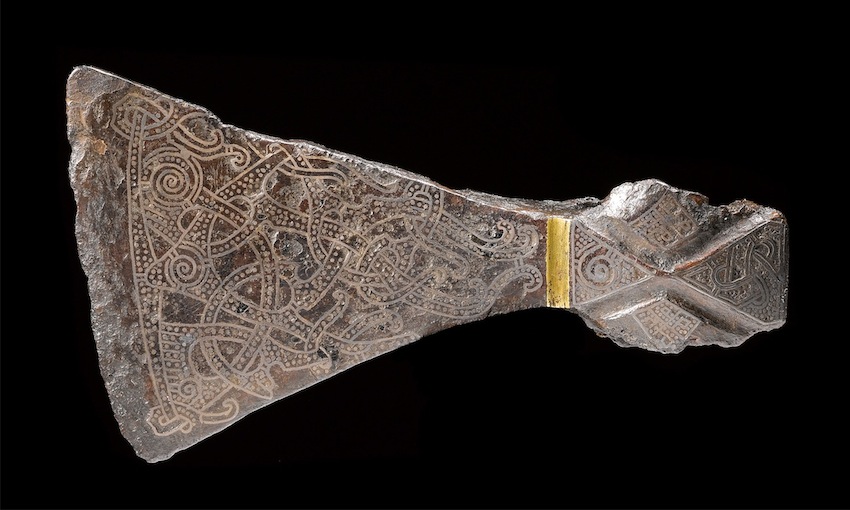 As the exhibition concluded, beyond gaining a broader understanding of Viking culture I found my faith in my childhood fantasies restored and as I left I passed the words of an Icelandic skald, or poet, writing at about 1062, “Men will quake with terror / Before the seventy sea-oars / Are given deserved respite / From the labours of the ocean. Norwegian arms are driving / This iron-studded dragon / Down the storm-tossed river / Like an eagle with wings flapping.” Thank Thor for that.