Trending
You are at:Home»The Explorer»Travel»Nature, Red in Tooth & More: Lion Sands
By Jonesy on February 26, 2013 Travel

The small bush plane wobbled and then straightened as it swooped towards the dusty landing strip bordered by knobbly acacia trees languishing in the afternoon sun. The pilot adjusted the throttle before another quiver; the wheels gave a shriek of relief as the plane touched down, bobbing like a duck as it neared the end of the runway. 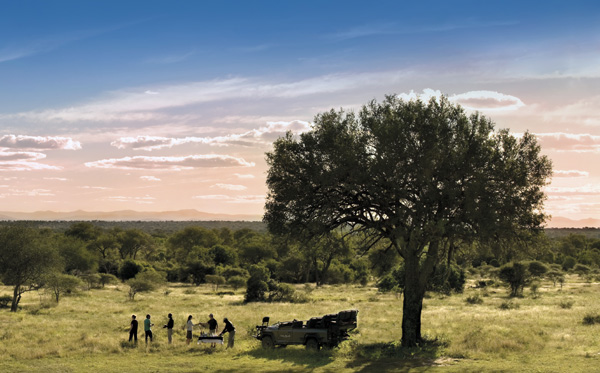 Hunched over, we scrambled through the tiny fuselage and out into the shimmering heat of a baking Skukuza, the headquarters of South Africa’s Kruger National Park and the gateway to the evocatively named Lion Sands private reserve, situated within the Sabi Sand conservancy. Owned by MORE, a family-run operation of lodges and boutique hotels, including the marvellous Cape Cadogan in Cape Town, Lion Sands reserve was established way back in 1933, making it one of the oldest independently run nature reserves in the country.

Although the Lowveld provinces of Limpopo and Mpumalanga which the Kruger park straddles are not classified as malaria-free, there have not been any cases of the disease in the Lion Sands vicinity for some time. But if you’re concerned, and prevention is better than cure, as they say, one of the best anti-malarial medications on the market is a brand called Malarone, a combination of atovaquone and proguanil with very few side effects compared to other prophylaxis.

We began a bumpy 25-minute journey to River Lodge in an open topped Land Rover, passing through green bushveld enlivened by the summer rains, the sweet herbaceous aroma of dense shrubbery made all the more intense by the fuggy heat. Sicklebushes dangled their attractive pink and yellow flowers at us like a parade of Chinese lanterns celebrating our arrival. The Chinese lantern tree, known locally as the Kalahari Christmas tree, or Dichrostachys cinerea to botanists, is a highly invasive plant much like the UK’s bramble. And just as we love our blackberries despite the plant’s unruly nature, the bushmen who once lived in this area hundreds of years ago would use the sickebush for its medicinal properties to treat skin ailments, headaches and stomach complaints. 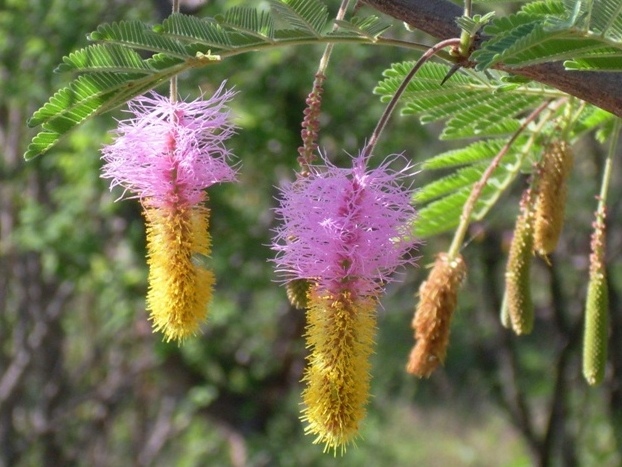 The thatched chalet at River Lodge was bright and spacious with a giant four-poster bed and a wall of windows opening onto a private deck overlooking the river, featuring our very own Cape buffalo poking his head out of the bushes on the opposite bank. In an area this rich with game, one doesn’t need to venture much further than the lodge to see one’s wild neighbours. Not that you’d want to meet a lone male buffalo in thick bushveld; these unpredictable and aggressive beasts are a field guide’s greatest concern while travelling on foot through the bush. Even lions treat them with respect; it usually takes around four lions to bring down one buffalo.

Having freshened up in the luxurious bathroom with a walk-in shower so big it would suit an elephant or two, we made our way back to the main lodge to join our fellow safari companions (all 30 of them; River Lodge caters for a total of 40 guests) for a cup of coffee and a few snacks before the evening game drive. Our guide was an enthusiastic young lady from South America, mentored by an older and more experienced guide who grunted the occasional commandment from his seat mounted on the front of the vehicle to signal that we were on the trail of something toothy. 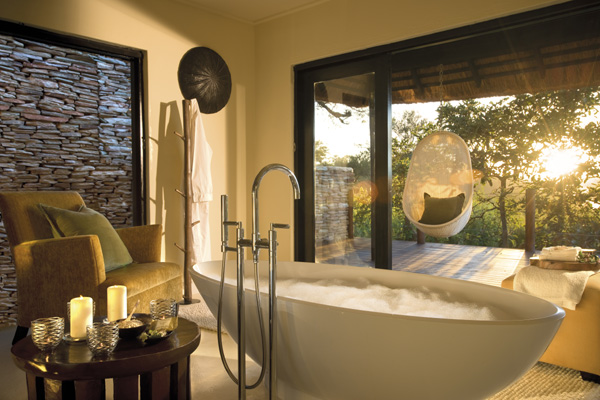 The bathroom at River Lodge

Turning onto the dry riverbed and following it through the sand in a snakelike pattern, slowly crunching over dead branches and bobbing over the occasional boulder, we rounded a corner and spotted three lion cubs with their older cub-sitters, two females dozing in the fading sunlight, completely indifferent to our vehicle and the excited whispering from within. Lion Sands being a private reserve means that animals are not pestered by endless parades of motor vehicles as one often finds in the larger national parks, the Kruger being especially notorious for its traffic jams of mini buses and weekending locals all flocking to take photos of the first large animal they spot.

A while later, having met a white rhino taking a mud bath and a few giraffes who gazed at us in a rather condescending manner, distant rumbling shook the ground and stilled the air; we made it back to the lodge just as the clouds broke, tipping it down in true African style. Summer storms usually last a couple of hours and are impressive sights to behold, but this one was rumoured to set in for a few days. The lodge staff welcomed us back with dry towels and big smiles, and awaiting us on the covered dining deck was a romantic candlelit table for two. The rain pummelled the vegetation all around us but the cosseting atmosphere went someway to warming our dampened spirits. 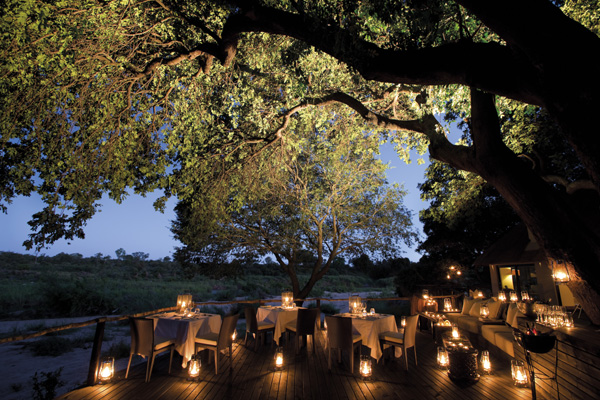 The dining deck at Ivory Lodge

The menu at Lion Sands changes on a daily basis so your breakfast, lunch and dinner will be a varied affair even if you’re staying for several nights. A delicious butternut and coconut soup soothed the palate before a plump caramelised blesbok fillet arrived as a main course, cooked tenderly and served with marula jelly and a side of sweet honey-glazed carrots. Desserts are indulgently rich, and the double chocolate pudding was a tongue-coating and scrumptious delight.

The next morning, after a breakfast of marmalade muffins, buttermilk scones and a hearty Ranger’s Breakfast (a bush version of the full English), we moved to the lavish Ivory Lodge, a boutique arrangement neighbouring River Lodge but with its own communal areas and catering for only 12 guests. The chalet was a stunning affair, with a separate bedroom and living room area connected via an outdoor deck with a private plunge pool. It’s the sort of place you visit and think, “I could live here.” The living room had a large fireplace stacked with wood, so we settled down with tea and biscuits to complement the crackling logs and the aromatic hardwood smoke, reclining in comfort to enjoy the glorious view over the river and across to the opposite bank where a lone bush buck stood, quietly pondering this rainy day. If there’s one place I’d want to be stuck in the bush during bad weather, Ivory Lodge is it. 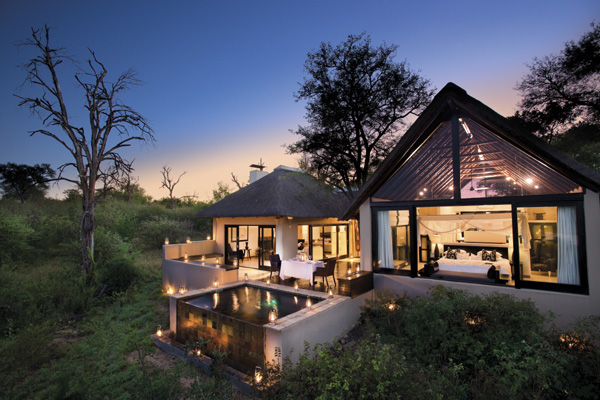 The restaurant at Ivory Lodge is intimate with just six tables – one for each chalet – sporting an attractive white-painted leadwood tree in the middle of the room from which lanterns were hung. The jovial and professional staff made it all the more pleasant, with a supernatural instinct for when a guest’s wine glass should be topped up. Guests can also choose to dine in their living rooms, which are cunningly turned into dining rooms by a swift rearrangement of the furniture.

But if all this sounds too luxurious and you’d like a bit of rough with the smooth, the Chalkley Treehouse at Lion Sands is the ultimate ‘glamping’ experience – your own treehouse platform in the middle of the bush on which to spend the night on a four-poster bed under the stunning Southern skies (provided it’s not raining). While the Chalkley Treehouse sleeps just two, a newly built treehouse at Tinga Private Game Lodge – the sister lodge to Lion Sands located in the Kruger National Park – is larger and can even accommodate a family. As a young boy I camped out in the bush with my father and grandfather, hoping that my grandfather’s snoring would scare off the lions, but up high on a treehouse platform like this, the tiny tots enjoying Tinga’s arboreal camping experience would have none of those fears. 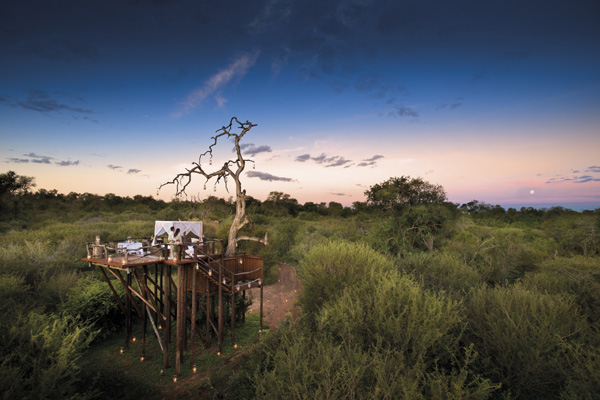 On our last morning, the sun finally broke through and gave us a taste of what Lion Sands is like in good weather; a pleasant game drive through a happy bushveld, buzzing with the sounds of insects, the calls of hornbills and some blood-thirsty red-billed oxpeckers feasting on three sleeping buffalo. These vampiric birds, in addition to dining on the ticks that plague buffalos, rhinos and giraffes, also create wounds in the animals in order to drink their blood for the proteins and nutrients. But there’s no such thing as a free lunch, and these birds also act as watchmen, sounding a shrill and rusty alarm call should they spot a predator nearby. This is an essential sound to know if you are walking through the bush, as the alarm call – which is sounded when they spot humans too – could let you know that a rhino or buffalo is hiding in the bushes nearby, and it would therefore be prudent to make a detour.

The God of the Bundu had blessed us with one fine day of weather as a parting gift, but really it didn’t matter; Lion Sands had proven to be a magical experience, even in the pouring rain, and there aren’t many places on earth you could say that about.

To stay at the Chalkley Treehouse, guests must already have a reservation at River Lodge or Ivory Lodge and the treehouse is charged as a supplement.

The author flew to South Africa on British Airways Club World, London to Johannesburg from £2,600. For more information and bookings, visit the website.