Trending
You are at:Home»The Explorer»Travel»The Fast and the Farcical: The Mdina Grand Prix, Malta
By Harry Chapman on May 10, 2014 Travel

“I hit record on my smartphone just as the first of the race’s Bugattis rounded the corner and screamed up the steep incline towards the citadel. The rest, all shining chrome and burnished bonnets, quivering in the heat haze of the late morning, roared defiantly after it like a swarm of beautiful cockroaches.

The lead vehicle, bouncing high over the asphalt, hit a pot-hole. There was a judder and then it spun off in a crippled wobble towards the enclosing wall. It described a graceful arc before its chassis slammed into the stonework.

I was the first on the scene, my legs carrying me across in an unconscious reflex. The driver was dazed and incoherent, his helmeted head lolling, his goggles misting up. Black plumes of smoke poured from the petrol tank. We didn’t have much time. I slipped a penknife from my pocket and sliced through his seat belt. I dragged him out of the seat and hauled him across the road. We made it to the other side just as flames licked up around the wounded vehicle. There was a deafening explosion and I shielded the man’s body as fiery debris pelted down around us.

By then the emergency services had arrived and I left the driver in the hands of the paramedics. I walked back alone to where I had been standing to discover that my phone, which I had left standing on a wall, had captured the whole thing…” 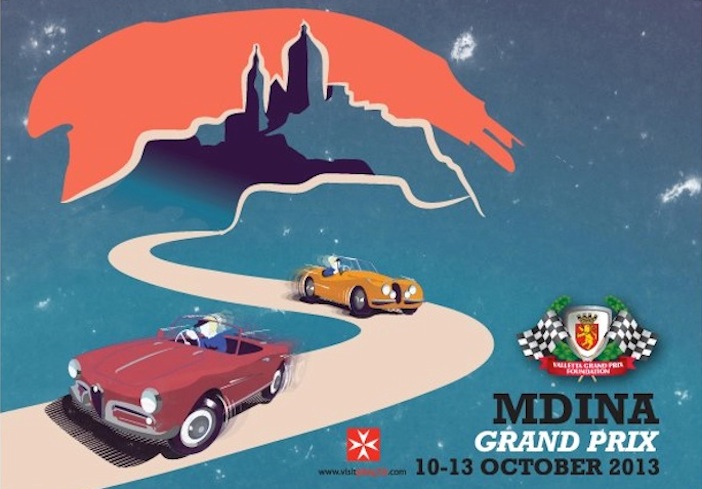 Those readers with a sympathetic interest in what happened to the poor driver, or, indeed, who may be wondering if my actions were ever formally recognised (with a civilian award for gallantry or some such), may feel cheated to find that the above was just a daydream, a Walter Mittyesque reverie that I conjured to enliven the red eye flight from Heathrow to Malta on a very early Saturday morning. I had been conducted there to cover, in the main, the Malta Classic Car Grand Prix which that weekend was occurring.

Was this a mistake, some monumental mix up, Jonesy’s revenge for some real or imagined slight? For I have no interest in cars, not one jot. I drive, after a fashion (although my wife would dispute this) but have not owned a vehicle since my mini metro (and that says it all really) was rear-ended outside my house more than a decade ago. For me a car is a thing that gets you from A to B only (and in these past years as a committed cyclist, frequently obstructs this.) I haven’t a clue on make and describe them by shape and colour (“the long red one”, “the ugly brown one”, “the bulbous yellow one” etc etc.) Me cover a grand prix? It was like asking Ronald MacDonald to review Heston Blumenthal’s “Dinner” or asking Giacomo Casanova to adjudicate in a prize wimple competition. I wasn’t exactly hoping for a crash to occur or for me to emerge as hero, but the fantasy might be needed to see me through the weekend.

And what of Malta the island destination? I knew that it had been tossed between various invading powers, much like its bigger neighbour Sicily, fifty miles to the north. I knew of the Knights Hospitaller, later the Knights of Malta, who made the island their home in the sixteenth century and who, some years later, repulsed a huge invasion force mounted by the Ottoman Empire in a great siege. I knew that the British ran things for a while. I knew that it was sometimes used as a film location and that the elaborate set for Robert Altman’s adaptation of Popeye still stands as a tourist attraction. Still, I had never been. My parents had but had found the island, in their words, “arid and a little lacklustre”. But, it was in the Mediterranean and at that time of year when autumn skies were beginning to brood back home and temperatures to drop, this was a good thing. To counter this, perversely, were the very vivid memories of a documentary I had once seen entitled Jaws in the Med which alleged that one of the biggest Great Whites ever caught was snagged off the coast of Malta. 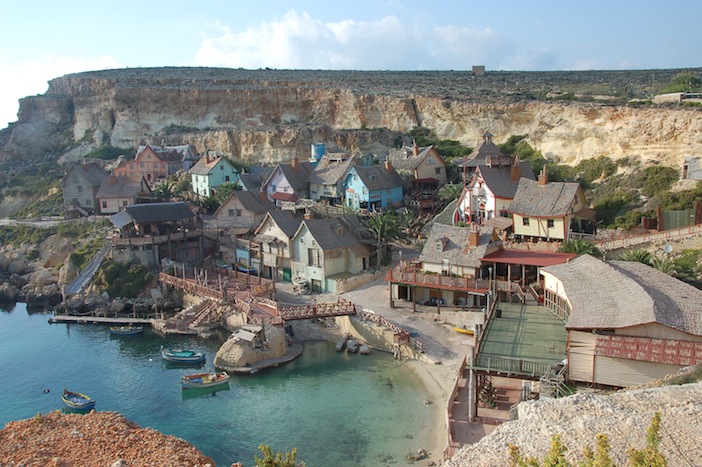 With burning cars and man-eating sharks in my mind things did not begin propitiously. Arriving at the hotel in the early hours of the morning I was met with blank stares and shakes of the head and was told that my room was not booked until the following day, a discrepancy I had spotted in the itinerary and flagged up earlier in the week.

In the morning things got off to a lively start. We were met in the lobby at seven forty by our guide – the very English-named Clive who was determinedly Maltese in birth and visage. I had had a little over four hours sleep and was suffering the ill-effects of a hang-over without the attendant joys of getting there. I was to spend the next few hours lurching about in a semi-stupor, wincing at the sun and trying not to lose my notepad.

Having arrived in darkness, I now had a chance to get the lie of the land. We were staying in St Julian’s, which was just north of the country’s capital, Valetta. Named after its patron saint, otherwise known as Julian the Hospitaller (who Flaubert paid homage to in his striking short story of the same name) it was once a quiet coastal town known for its Latin architecture and the greenery of its parks and gardens. Since the growth of tourism it has increasingly catered for this trade. Now Romanesque churches and crumbling villas are squeezed between high-rise hotels (of which mine was one), restaurants and nightclubs, which cling to the steep hill that falls down to the walled and rocky coastline. Many of the towns surrounding Valleta, such as Silema and Vittoriosa, have been subsumed in an encroaching urban sprawl making one difficult to disentangle from another, creating an amorphous mega-city like Greater London (though not of course quite on that scale.) With a land mass of 122 square miles, Malta is one of the most densely populated countries in the world. 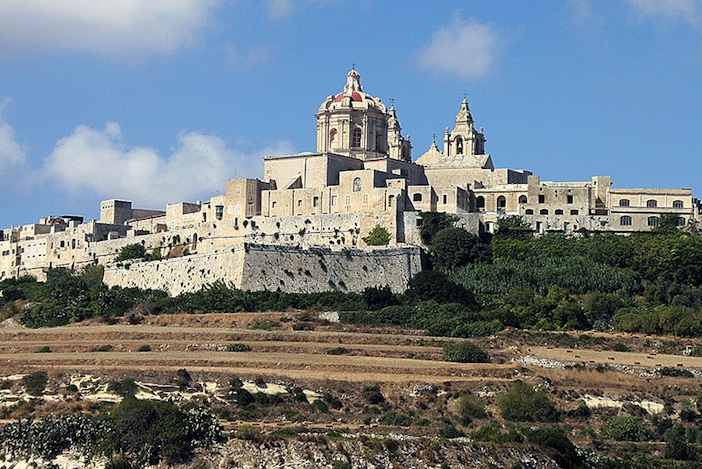 The Grand Prix was taking place in and around the old capital of Mdina and it was to here that we were now driven. Formerly the capital, Mdina takes its name from the Arab word for city, “medina”, which traces back to the Arab conquerors who ruled the country from 870 to 1091 AD. In fact, although there is evidence of settlements on the site stretching back more than 6,000 years, with the governor building his palace there under Roman rule and even the shipwrecked St Paul making his home there for a time, it was under the Arabs that the “modern” city really dates. It was they who raised the massive defensive walls and dug the outlying moat. The town, approached across a rocky plain, is situated in the central west of the island. Two miles from the sea to the south and perched on a high craggy promontory, it is clear why the site was chosen in those days when invasion by sea was an ever present threat. Even now the city glares down at the approaching visitor with implacable sternness.

Ironically, for a place chosen to host the glorifying of motor cars, Mdina, apart from allowing access to emergency vehicles and a few passes allocated to residents, has a strict no-car policy within its walls. The rallying of the cars was instead held at the foot of its great bastions, the town forming a picturesque backdrop.

We arrived and were waved through a roped-off entrance into the inner sanctum of all things vehicular. Only my pass received any scrutiny, the gate-keeper staring hard at my face for a few moments, perhaps sensing the fraudulence of my position as absolute car ignoramus. There appeared to be two main areas of focus. In what seemed to be part of the flag-stoned (and dry) moat were assembled the cars, separated according to category and age, waiting like models in the wings of a catwalk. This opened onto the road which marked the start and finish of the course and bristled with mechanics, race officials and people who looked like they knew what they were doing, and for a brief period, me. Above this was a stretch of park-like ground where spectators could gawk and gaze longingly at the cars, and a hospitality tent where they could receive libations to lubricate further talk on walnut dashboards and bucket seats. 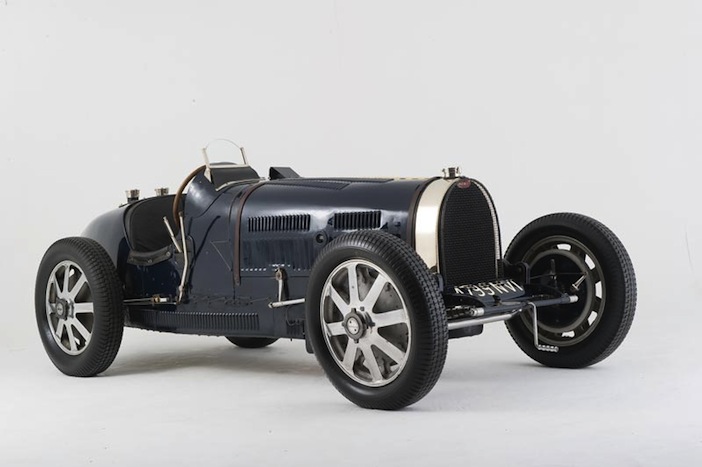 I mock but even I, as motor philistine, couldn’t help but admire the assembled vehicles. Whilst I find modern cars pretty unprepossessing, falling foul to clunkiness and utilitarianism, there were decades when aesthetic form and function were combined to create some spectacular specimens. My favourites here, without a doubt, were the Bugattis, which were cylindrical in shape – literally like a “hot dog” and which had extraordinary harmony amongst the component parts. They were beautiful to look at and as sculpturally considered as a sculpture. Indeed the Milanese founder, Ettore Bugatti, born into a family of artists, considered himself both artist and constructor. This was no effeminate bluster either. The Bugattis were extremely successful racers, taking top prizes in many of the major races throughout the twenties and thirties. The 1924 Bugatti Type 35, with over 2,000 wins to its credit, is probably the most successful racing car in history.

By then the day’s races were about to begin. Like Monaco the course was laid out on existing roads – in this case the long steep road that plunged down the hill from Mdina. It then followed a loop around a distant hill before switching back up the same descent. The fact that the races were taking place on domestic roads made the whole thing more exciting, knitting together the racers with the locale and creating a buzz I’m sure quite different to that fomented by a track. Part of this was the risk as there was no way public roads could be enforced for safety in the same way a circuit could. In these days of health and safety this offered the cooling draught of escape. As I took my place amongst the jostling crowds on the high wall next to the hospitality tent, did I detect the heady whiff of danger?