Trending
You are at:Home»The Explorer»Travel»Malta and the Mdina Grand Prix – Part II
By Harry Chapman on May 11, 2014 Travel

The next day, a Sunday, dawned bright and clear. There was a Matisse blue Mediterranean sky above and the rains which had washed clean the land also seemed to have taken with it the last vestiges of my tiredness. I was chipper and ready to start.

The day was different for another reason. Instead of the races, that morning we were being taken to see two ancient Neolithic temples – Hagar Qim and Mnajdra. There are more than twenty of these structures scattered across the islands of Malta, and this was another thing that I was ignorant of until I arrived – that Malta is not a single island but an archipelago consisting of the major land mass (Malta), Gozo and Comino in descending order of size, and a number of uninhabited smaller islands. I was chastened that I had not heard of these buildings before, for they are extraordinary – truly wonders of the ancient world. They date from 3600 B.C which makes them older than the pyramids. Indeed they are amongst some of the oldest free standing structures on earth; next to Göbekli Tepe in Turkey, the Maltese megalithic temples are the oldest. Unbeknownst to me before I arrived I was to see buildings that are a staggering five and a half thousand years old!

Hagar Qim and Mnajdra are located in the south-western corner of Malta, in view of the coast and on limestone ridges of the stuff that the temples themselves were hewn from. This relatively isolated position has probably been the saviour of them. They were only ‘discovered’ in the early part of the nineteenth century and their location meant they were spared the encroachment of civilization and the pilfering of their stone for the use in newer buildings. 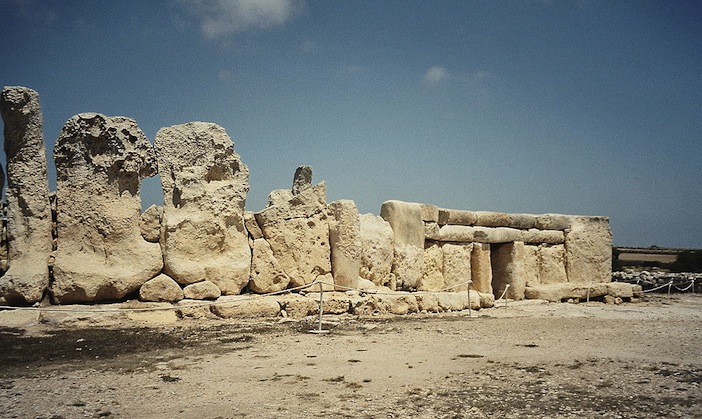 Hagar Qim was the first of the temples we visited. It sits on a rise with views over the surrounding countryside. The land around it is barren and scrubby and the temple is reached by a dusty track. Of course we have Stonehenge (which I used to see at regular intervals as I zoomed past on the A303 to and from university), which is undeniably evocative and awe-inspiring, but this did not prepare me for the sheer architectural sophistication of these sites. A large paved forecourt sits before the outer façade wall of giant vertical blocks, the largest of which weighs 57 tons, stands 17 feet high and is the recognised giant amongst all the islands’ temples. These standing stones lean in, increasing their fit and strength and enabling them to take the weight of the stone roof which has long since fallen away. An entranceway leads to a central passage connecting a series of elongated oval chambers and semi-circular recesses. The building’s configuration has been recognised as “trefoil”, which curiously is a shape often encountered in Christian symbolism.

Little is known of the society that created these complexes. The islands were believed to have been first settled in about 5200 B.C by the Sicani people from Sicily. Whether they evolved into the societies which built the temples, or whether they themselves were supplanted, is still uncertain. One tangential and extraordinary fact was that there were dwarf hippos and dwarf elephants inhabiting Malta at the time of the first human migrations, in an inverse way of islands such as Komodo in Indonesia or the Galapagos, whose isolation led to gigantism in some of the fauna. The temples were thought to honour a fertility cult, numerous varieties of which were spread throughout Europe at the time, and a number of statuettes have been discovered whose generous proportions have led them to be nicknamed the ‘Fat Ladies’. Such figurines were frequently associated with such cults.

While there are still many questions surrounding these temples, the culture which built them ended abruptly in 2500 B.C. How and why we don’t know. Some have conjectured famine or disease was the cause but as the temples were abandoned and the people retreated to hilltop fortifications, it might be safer to assume that it was the beginning of fractiousness and violence. This was the dawn of the Bronze age which marked the development of advanced weaponry. 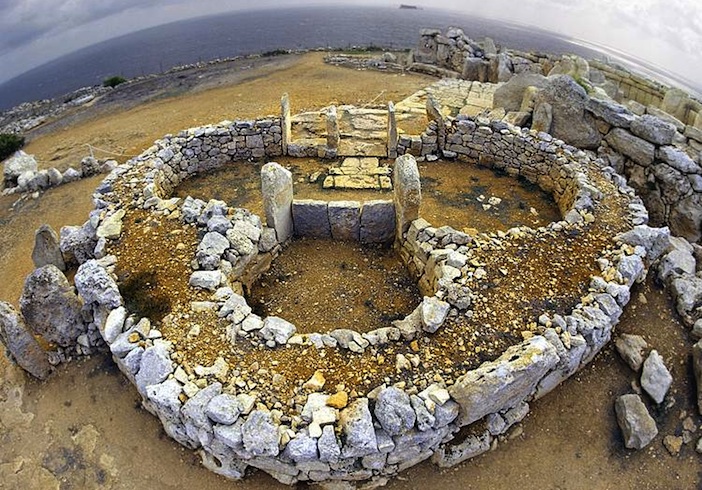 The Mnajdra temple stands a mere 500 metres from Hagar Qim at the bottom of a slope overlooking the sea, and indeed only a very long stone’s throw from the cliffs which plunge down to the boiling water. A few hundred metres away stands the Hamrja Tower, one of the thirteen watch towers built by Grand Master Martin de Redin, head of the Knights of Malta in the late 1650s. Also nearby is a memorial to General Sir Walter Norris Congreve, Governor of Malta from 1924-1927. Three different structures made in three different periods for three very different purposes but all drawn and unified by the great glittering expanse of the sea which surrounds the islands.

Returning to the car we took the coast road south-east and soon arrived at the picturesque fishing village of Marsaxlokk. The settlement sits in the shelter of a large natural harbour now protected by a stone breakwater. In fact the village’s name is derived from the Maltese word for port, marso, and xlokk, meaning south-east. So rather prosaically for a name which looks so exotic in English, it simply means, ‘South eastern port’.

The dry sirocco wind that blows in from the Sahara brought the Phoenicians and it was here they first landed during the ninth century B.C. But human habitation predates this by at least a couple of thousand years. On the hill of Tas Silg which overlooks the bay on the north side are the remains of another megalithic temple. The site was again used for religious purposes when a temple dedicated to Astarte (and then Hera) was constructed and which was in use by the Phoenicians and then the Romans from the end of the sixth century B.C up until the first century A.D. In the fourth century A.D a Christian monastery was built there completing a curious hat trick of religions. 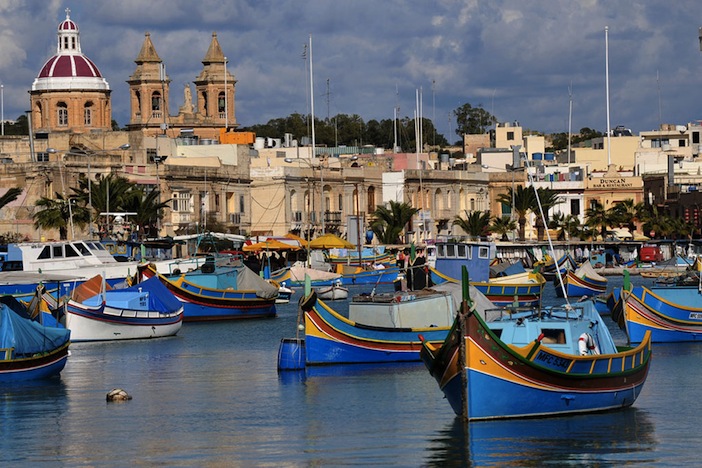 Although a power station has been built at Marsaxlokk and the place is used increasingly for the discharge of petroleum products, and although fishing has seen a decline in recent years, the port is still the primary contributor of fish to the island. The most striking thing about the village are the hundreds of gaily painted traditional fishing boats, striped in reds, yellows, blues and greens – some bearing the protective eye of Isis on their hulls – that bob on the still, blue waters of the harbour. These have become something of a tourist draw along with the many fish restaurants that have opened along the promenade to meet the demand. It was to one of these that we repaired for lunch and feasted on fresh bream and octopus after a stroll under the covered Sunday market – selling an odd mix of fish and plastic tat.

There was one final destination we needed to visit before returning to the roar of the superbikes and supercars of the final day’s racing. Given the motor vehicular theme of the weekend it would have been rude not to have included the Malta Classic Car Museum on the agenda and it was here that we were duly deposited. Situated in the north-eastern tourist town of Qawra, the museum is set amongst a sprawl of hotels, casinos and nightclubs on a rocky promontory which encloses Salina Bay. The exterior of the place is unprepossessing, peeping out from below the Canifor Hotel which seems determined to pile drive it into the ground. It doesn’t look like it could hold more than an average car showroom. It is only when one descends the steps into the basement that one realises the deception. A huge cavern has been excavated – 3,000 square metres of floor space – on which gleam and sparkle dozens of cars from almost every era, all in pristine condition.

The museum is the progeny of Carol Galea and it was he that now wandered in to greet us. Round and jolly, full of laughter and enthusiasm, Mr Galea’s story is a remarkable one. Growing up in Malta during the fifties and sixties, his love of cars was quickly and firmly established. For him there really was nothing else. He raced, first illicitly in the hills, then professionally on tracks, but when he realised he didn’t have the talent to flog this into a career, he turned to collecting – usually dilapidated old wrecks he would discover in a farmer’s barn, which he would buy for a pittance and then lovingly restore. But this was only done as an amateur, as someone who was following their star, much as a kindly old lady would take in stray cats. The difference being that Galea would turn his heaps of junk into purring masterpieces. For many years he continued this on the side and as his principle trade and business grew he was able to spend more on purchasing and restoration. It was only when he had amassed a considerable private collection that he was nudged into thinking that others might be interested in sharing it too. And so the Malta Classic Car Museum was born. 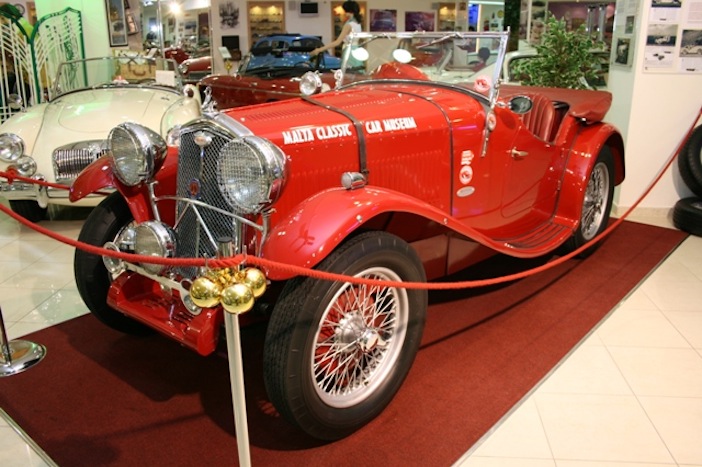 Amongst the cars and bikes are jukeboxes and radios and other paraphernalia of the times including mannequins in bygone fashions. The museum is very much a fanboy’s collection, decked out with the gusto of a child running rampant in a sweet shop. Unsurprisingly it is the cars of the fifties and sixties which hold sway – the 1956 Ford Thunderbird, the 1957 Austin Healey 10016, the Triumph Spitfire MKII, the 1960 Alpha Romeo Giuleitta Sprint Speciale, the 1965 Sunbeam Alpine Series 4 Automatic, the 1962 Chevrolet Corvette Roadster (names with a tantalising capacity to conjure even without the benefit of visuals) – unsurprisingly because the period represents the era of Galea’s youth, when he was first intoxicated by the rev and roar of the engine, when he was first smitten by this life long love affair, when all things seem rose tinted and special. The museum may have lacked a curator’s finesse and sérieux, but it reflected its creator’s personality which was full of unaffected spirit and warmth.

We returned to the course, this time a couple of miles from Mdina, at a junction where cars flew at you down a long straight stretch. The familiar mix of film crews, officials and fans milled about, jostling for position. We took our place on a mobile deck of folding pavilion seats as a group of cars roared towards us. I hadn’t become a car fancier overnight but I had, through the experience, through observation, through meeting Carol Galea and Mark Miceli too, come to the realisation that it wasn’t about the cars but about the passion a thing inspires that elevates it and makes it a thing of interest for other men.

The 2014 Valetta Grand Prix in Mdina takes place from Thursday 9th to Sunday 12th October. For news, information, past results and even to participate, visit the website.

For more information about Malta, including ideas on what to see and do and planning your trip, see the Visit Malta website.