Trending
You are at:Home»The Culturist»Art»Becoming Picasso
By Allana Isaacs on April 19, 2013 Art

Many people associate Pablo Picasso solely with cubism and abstraction; the Guernica’s, The Weeping Woman and Demoiselles d’Avignon of this world. But this assumption would merely scratch the surface of Picasso’s achievements across his extraordinary career. No artist can arrive at a signature style without a sense of progression and development and that is what this exhibition aims to show. It brings together many of the major paintings displayed at Picasso’s début exhibition in which he was aided by legendary dealer Ambroise Vollard in the summer of 1901. Focusing exclusively on paintings created in this year, the exhibition displays eighteen works of art believed to signal the “birth of Picasso’s artistic genius”. 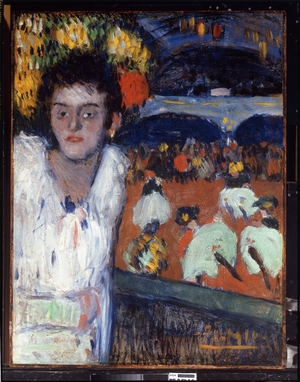 Arranged over two rooms and, set out against clean grey walls with large spaces between paintings, the exhibition is well composed and effectively demonstrates both thematic and stylistic links between the works. The first room plays host to some of his most fervent work in the run up to his Paris début. At his peak, he completed as many as three canvases a day – a staggering feat. They are a combination of single figure paintings and heady compositions of dancers at the Moulin Rouge. Bold, garish colours and visible brush strokes provide the background to a caricatured approach to the female form; the dancers are often lacking in facial clarity (the allusion to the masses), or possess an element of the grotesque. Dwarf Dancer is a prime example of this, in which her aggressive stance and wizened face is a stark departure from the revered grace with which Degas approached the same subject matter. These early works certainly show Picasso looking to the canon of great artists before him and reinventing their styles, motifs and subject matter through his own, very unique, lens. For example, the composition of At the Moulin Rouge in which the large foreground figure is used as a framing device for the remainder of the canvas shows clear parallels with Manet’s A Bar at the Folies-Bergère from 1882. 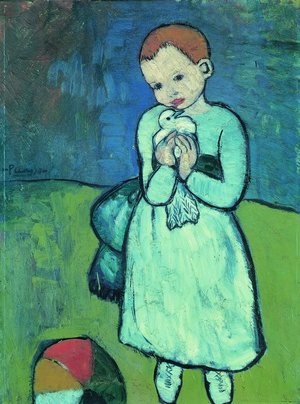 The Vollard show was a critical success and an undoubted platform for the launching of the nineteen-year-old’s career. The latter part of the year, however, saw him turn towards a more melancholy, introspective period, purportedly precipitated by the death of his close friend, Carles Casagemas, who committed suicide earlier in the year. Isolation and marginalisation are key themes and his style shifts towards a more muted colour palette, heralding the beginning of his so called Blue period. These images are presented in the second room. The back wall displays by far the most sombre works: those directly influenced by his friend’s death. Evocation, a secular altarpiece of the style of El Greco, stands alongside an imagined portrait Casegamas in his coffin, in which the disembodied head painted in blues and greys carries an intense deathly melancholy. The brush strokes are much more coherent and the canvases now have large expanses of single colours rather than the previous enlivened spaces with highlights and accent strokes. Perhaps taking his cue from Manet’s use of the café as a space of isolation and transience, two works here reinterpret this idea with the figure of the Harlequin, a familiar trope in some of his later works. An undoubted highlight was the presence of Child with a Dove, a delicate portrait of childhood innocence which draws clear influence from the likes of Gaugin. With the recent news that this iconic painting is likely to be destined for Qatar, it was certainly a privilege to see it in the flesh before it departs. 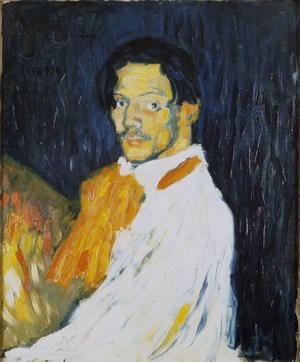 The most striking works from the exhibition are undeniably the two self-portraits. Confronting the viewer in both works, Picasso emerges from the mysterious dark background, his confidence and ambition apparent by his signature not just of his name, but instead ‘Yo Picasso’ (I – Picasso). This outstanding declaration of artistic intention merely scratches the surface of what he would later go on to achieve. A rare opportunity to see such fine works in one setting and a thought provoking exploration into the lesser known past of one of the best known artists of the twentieth century.