Trending
You are at:Home»The Culturist»Art»A Century of Lucian Freud
By Rosalind Ormiston on December 19, 2022 Art

In London at least three excellent exhibitions are currently running to celebrate and commemorate 100 years since the birth of the British painter Lucian Freud. Each identifies aspects of the artist’s life and work, to define why his status in the art world is deserved; during his lifetime he was recognised as Britain’s greatest living painter. The grandson of psychologist Sigmund Freud, Lucian was born in Berlin on 8 December 1922, emigrating with his family to England in 1933 as the Nazis seized power. Granted British citizenship in 1939, he died in London, aged 88, on July 20, 2011, having produced an extraordinary body of work during his unconventional, at times eccentric, life. The three centenary shows are a chance to see the scale of his work. All are worth seeing.

Giving insight into Freud’s brilliance as an artist, London’s National Gallery hosts ‘Lucian Freud: New Perspectives’ (until 22 January 2023) and offers a chronological retrospective of his life and art, including thought-provoking loans such as The Refugees 1941 (Private Collection courtesy of Hazlitt Holland Hibbert) and the love-it or hate-it royal portrait Queen Elizabeth II, 2000-2001 (lent by His Majesty the King; Royal Collection Trust). The exhibition is huge – more than 60 paintings – and range from 1940 to 2011. Amongst many showstopper paintings there are those that go beyond the client commissions, notably the small portrait drawing of his dead mother, allowing a personal glimpse into the privacy of his mother’s room and their relationship.

If one’s interest is to learn about an artist’s life as much as the art created, this is what the Gagosian gallery offers with a brilliant snapshot of Freud’s life in ‘Friends and Relations: Lucian Freud, Francis Bacon, Frank Auerbach, Michael Andrews’ (until 28th January 2023). Curated by art historian Richard Calvocoressi – with the talent to create an exhibition that leaves you wanting even more – he has collected over forty paintings, many from private collections, to highlight the remarkable art scene in London from the 1950s, 1960s and beyond, in which Freud, Bacon, Auerbach and Andrews were immersed. The show is a picture of their professional and social lives. It’s a truly stunning show. Calvocoressi focuses on the friendships between the artists through specific artworks, particularly portraits of each other, and paintings they created of their families. Of the four, only Freud collected artworks by the other three. All were figurative painters during a period when collectors and gallery curators were immersed in abstract art.

A vast floor-to-ceiling installation of a black and white photograph featuring the group seated around restaurant tables, talking and laughing, opens the Gagosian show. Taken in 1963, it shows Timothy Behrens, Freud, Bacon, Auerbach and Andrews in Wheeler’s restaurant in Soho, London, in a scene staged for Queen magazine by photographer John Deakin. At the core of this image is the close bond between Freud and his friends, who saw each other almost every day. 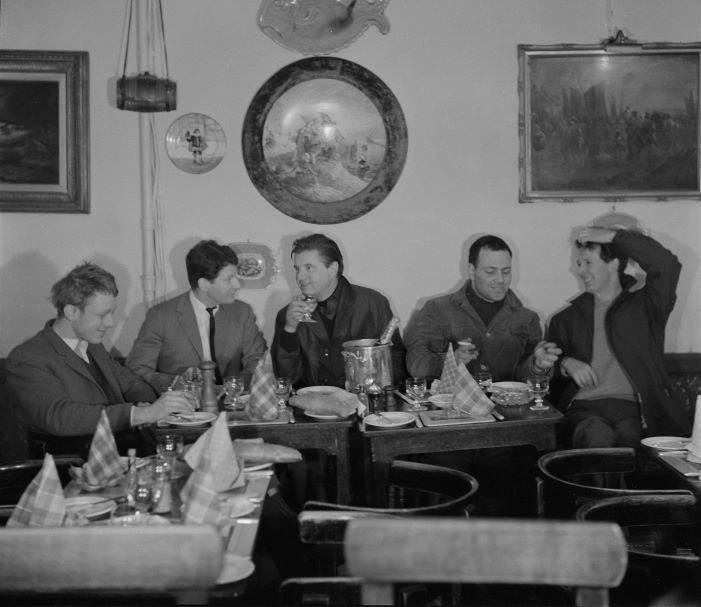 As painters the four ignored the demand for abstract art to explore representational painting, giving new life to portraiture. Michael Andrews painted their London lifestyle in a group portrait, The Colony Room I, which depicts them in the drinking club they frequented. Andrew’s own mural is in the background, placing him in the painting with Freud, Bacon, the photographer Bruce Bernard, artist’s model Henrietta Moraes and the club’s owner Muriel Belcher. It is a large painting and hung at a low level to allow viewing up close. The hang of the exhibition is excellent. I appreciated comparing Freud’s monumental Standing by the Rags, 1988-89 (Tate Gallery), alongside Auerbach’s vast E.O.W., S.A.W. and J.J.W, in the Garden I, 1963 a portrait of his lover Stella West and her family outdoors (Grimsthorpe and Drummond Castle Trust).

There are key Freud works here including paintings of Freud’s mother, his daughter Bella in Naked Portrait on a Red Sofa, 1989-91, and Reflection (self-portrait) 1981-1982, both from the Lucian Freud Archive. Bacon’s triptych Three Studies for Portraits: Isabel Rawsthorne, Lucian Freud and J.H (1966) is here, too. Freud and Bacon were intensely close friends. An added reason for seeing this exhibition is the collection of individual portrait photographs taken of the artists by Bruce Bernard (1928-2000), on show in the upper gallery in ‘Bruce Bernard: Portraits of Friends’. 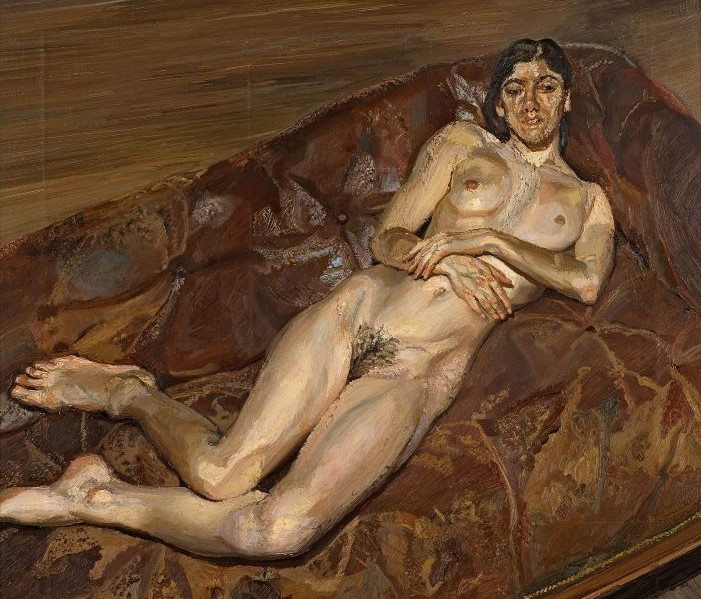 The third exhibition to see, by no means least, is at The Garden Museum, next to Lambeth Palace. ‘Lucian Freud: Plant Portraits’ (until 5 March 2023) curated by art historian Giovanni Aloi, which concentrates on Freud’s paintings of plants. It has excellent loans from private collections, including Still Life with Zimmerlinde (c.1950) and Cyclamen (1964). And rarely-seen drawings created during Freud’s Berlin childhood, alongside depictions of plants that later grew in his garden in Notting Hill, London and the gardens of Coombe Manor, Dorset, purchased in 1953 by Freud and his second wife Caroline Blackwood. This show gives another vision of Freud through his work and life, highlighting the meticulous rendering of foliage and flowers using the same analytical attention he gave to the life-size nude portraits for which he is famed.

Each of the exhibitions verify why Freud is revered as one of Britain’s greatest painters. But, if you only have time for one of them, the Gagosian show offers the more comprehensive picture, encapsulating Freud, his life, his friends and his art. And the gallery is beautiful, too.

Rosalind Ormiston is a journalist and art critic. See more of Rosalind’s work at www.rosalindormiston.com.