Trending
You are at:Home»The Culturist»Art»Félix Vallotton: Painter of Disquiet
By Alice Payne on September 30, 2019 Art

‘The very singular Vallotton’, as his editor called him, is surprisingly unknown in the UK, despite having been Europe’s leading printmaker and one of the Nabis group of fin-de-siècle painters. Fortunately for British audiences, the Royal Academy has staged the UK’s first retrospective, Félix Vallotton: Painter of Disquiet – delivering an insightful exhibition about the unusual Swiss artist and his intriguing work. Comprising around 100 pieces, it tells the story of Vallotton’s successful and varied career – from his early prints to his fly-on-the-wall paintings, portraits, landscapes and nudes.

Born in Switzerland in 1865 to a conservative, middle-class family, Vallotton moved to Paris aged 16, having turned down a place at the prestigious Ecole des Beaux-Arts for the more liberal Académie Julian. Prodigiously talented and highly disciplined, he excelled as a realist painter and rejected the impressionism popular with his contemporaries. But this conventional leaning masked a subversive undercurrent. 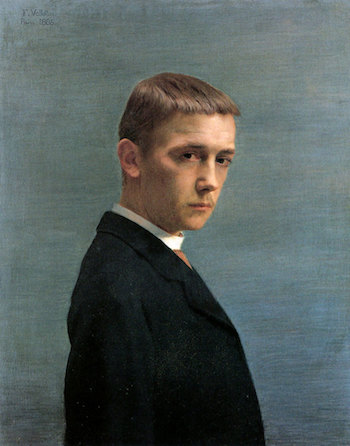 On entering the exhibition, you’re greeted by Self-portrait at the Age of 20, which sets the tone of what’s to come. It reveals a guarded young Vallotton, with a questioning expression and detached demeanour. As with each of the self-portraits on display, it gives the impression the viewer is being observed by Vallotton, rather than the other way around.

Unsurprisingly, a few years later he rose to prominence as chief illustrator for the satirical magazine La Revue blanche, in which he derided Paris’s bourgeoisie in monochrome prints that specialised in the absurd. Those on display here are immensely entertaining. Vallotton artfully parodies his subjects, with his reductive style intensifying their idiosyncrasies. Theatrically staged, it’s impossible not to enjoy birds-eye scenes of Parisians shedding their dignity en masse while fleeing the rain, or elegant ladies battling to save their hats in Gust of Wind. Images like Paris Intense, where a small boy stands at a busy crossing, his face a picture of discomfort as he tries to ignore a drunk man beside him, are comical yet relatable. The Demonstration is another familiar scene that stands the test of time, showing a panicked crowd tumbling into each other in exaggerated form. Whether he’s laughing at or with his subjects isn’t clear, but he certainly captures the oddities of human behaviour and reflects them back at us.

In 1899, Vallotton surprised friends with his marriage to a wealthy widow whose family were prominent art dealers. From then on, he focused mostly on paint, but continued to produce scenes that blended intrigue and unease. His fly-on-the-wall paintings of romantic liaisons are a particular highlight, where the clean aesthetic of his work belies the layered scenarios within.

There’s The Lie, where a scarlet-dressed woman balances precariously on her companion’s lap, her face obscured as she leans into his neck. His expression is inscrutable, and the agent of the scene is as ambiguous as the title. Then there’s The Visit, where a couple in a richly hued room seem locked in a tender pose – his hand on her waist, her hand in his. But on closer inspection things may be more tense. Is she pulling away from him? Is his grip as gentle as it seems? In Five o’Clock – the time when men would visit their mistresses after work –a couple embrace passionately while wedged into an armchair, their confined space hinting at the illicit nature of their liaison. 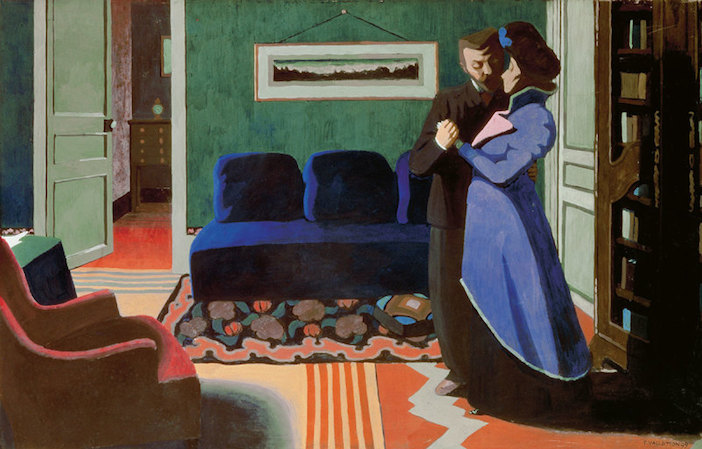 Vallotton wasn’t immune to his own satirical glare, however. One of the most unsettling paintings is Dinner by lamplight – a claustrophobic family setting where the artist sits in shadow with his back to us. Opposite, his young stepdaughter stares at him, seemingly frozen in terror – her fear unnoticed by the other diners. It is perhaps the most powerful image here and our sympathies are firmly directed to the frightened child.

Beyond his anthropological subjects, Vallotton was also a talented landscape painter and like fellow Nabis artist, Bonnard, produced landscapes composed from memory. ‘I dream of a painting free from any literal respect for nature,’ he wrote, preferring to focus on the emotions evoked. The handful of landscapes on display are beautiful and echo the Japanese influence in his earlier prints, with flattened forms offsetting vivid colour. Stripped of disorder and replaced with calm, paintings such as Sandbanks on the Loire are emotive but unsettling – with their cleansed and slightly surreal scenes feeling familiar yet alien. 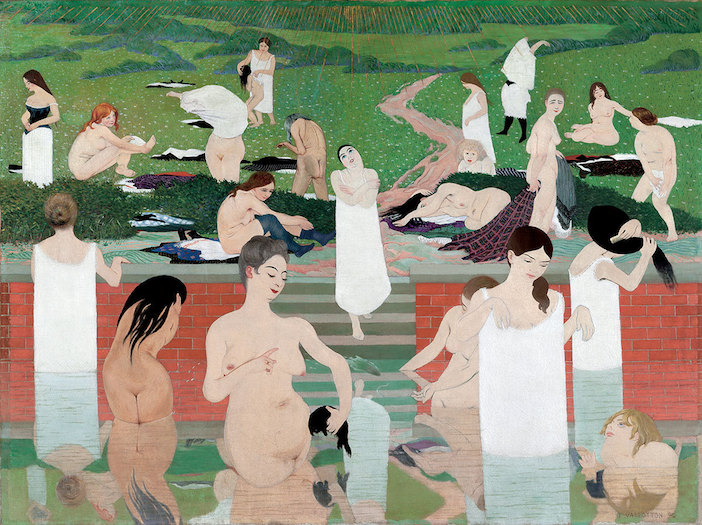 The standout piece and one of his most known, however, is Bathing on a Summer Evening, which was met with indignation and ridicule when unveiled. A satirical take on a classical bathing scene, its nymphs are replaced with ordinary women who are a far cry from their predecessors. Amongst the bathers, two women are entangled in their clothes, another appears to have passed out beside a bush while others are drying themselves with impractically small towels. A child shivers in the unappealing water and for some reason a drenched puppy is being removed. Centre stage, a white-clothed figure descends the steps, backed by an ethereal light. But her crucifix-like pose and beatific expression may just be a reluctance to enter the freezing water. Either way, her scene is stolen by a pair of elderly, sagging buttocks nearby. The more you look, the funnier it all gets. Toulouse-Lautrec was one of the few to appreciate it, but even he was worried the police might come and take it away.

Vallotton’s work does not subscribe to convention or stir deep emotions. Like the artist, it is enigmatic and singular. But his narrative skill is highly compelling, and this exceptional exhibition is a revelation.

Félix Vallotton: Painter of Disquiet ran at the Royal Academy through the summer.