Trending
You are at:Home»The Culturist»Art»Lowry and the Painting of Modern Life
By Allana Isaacs on July 17, 2013 Art

Lowry’s predictable style can be recognised by even the most unobservant of museum visitor; the bold black outlines, the linear composition always running parallel to the picture frame, and the vast expanses of landscape background. All this is part of his charm, but there is an element of oppressive monotony by the sixth room of Tate Britain’s latest exhibition. Organised thematically, it did little to make any career progression or stylistic development apparent due to the non-chronological hanging. This made the cyclical nature of his work even more apparent and harder to accurately digest and make sense of. Lowry is widely celebrated as a ‘painter of modern life’ – indeed that is the title of the exhibition – and yet the fact that his works span over 60 years and depict the same conception of modern life, surely demonstrates that it is his own particular realisation of everyday life we are viewing. Events such as evictions, suicides and the arrival of the fever van to take away ill and dying children, are normalised to the extent that they are not even instantly noticeable within a composition. 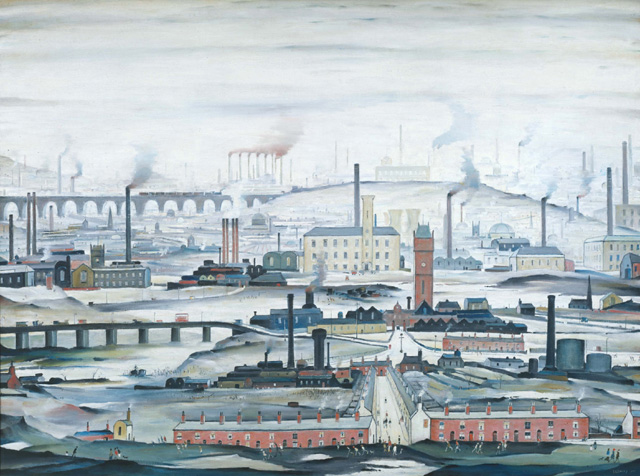 The second room serves to provide and encourage links to contemporary artists; a fruitless comparison, in my opinion, with such diverse artists as Seurat, Pisarro, Van Gogh and Utrillo. While it is true that Lowry was better celebrated in his early career in France than in his home country, that these purported similarities are stressed to the neglect of possible stylistic similarities with artists from further afield, such as the USA, seemed strange to me. The links to French realism are stressed too firmly and the choice of comparative pictures, so stylistically diverse and rich, is largely misguided.

Changes from the expected conception of Lowry’s paintings came in the fourth room which displayed examples of the impact of the industrial revolution on nature. Still dismal, still bleak and still using his stylised portrayal of the human form, these paintings steered away from the uniform approach to space and composition instead comprising of disjointed lines and a greater variety of depth and colour. Other shows of variety was the portrayal of the human form in some of the paintings of room five. Lowry’s response to the new post war political and cultural realities saw a more satirical, comic approach towards the ‘popular’. This included lighthearted subjects such as the fun fair or the music hall, but also, somewhat disjointedly, included the disabled and mentally ill, such as in The Cripples of 1949, whose faces are bestowed some of the greatest attention of any of Lowry’s figures but seemed to me intentionally soulless. 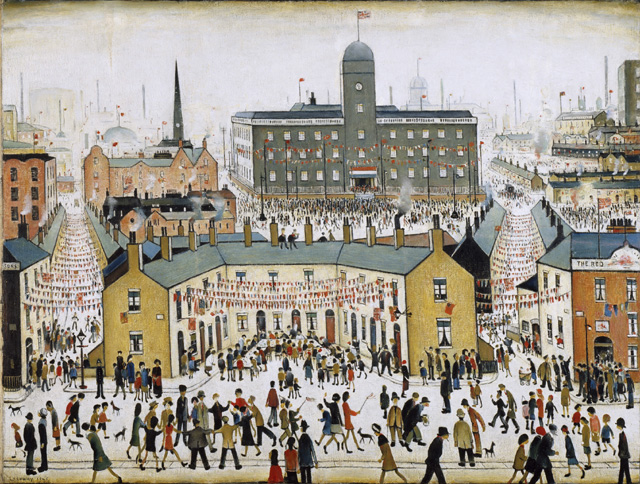 By his own admission, Lowry’s figures were only half real. While daily life has unlimited possibilities, the people are bound by routine and habit. He was quoted as saying that his figures were, “symbols of my mood, they are myself” since “natural figures would have broken the spell of my vision”. This confirms that we as a modern audience can never use Lowry’s paintings as a means to understanding the modernity of his world, as we can never be sure how much is the beauty of everyday realism and how much stems from the imagination of the artist himself.

Lowry and the Painting of Modern Life until 20th October 2013 at Tate Britain, Millbank, London SW1P 4RG. Adult £16.50. For more information and tickets visit the website.