The Royal Academy is as prestigious as they come and to be featured in their Summer Exhibition is no mean feat. With over 11,000 pieces submitted for consideration this year, the top 1,200 (or thereabouts) currently grace and occupy its hallowed walls. The result is overwhelming, and at times claustrophobic, as work upon work is stacked high on the walls, occasionally rendering the upper registers barely visible. Everything from paintings to photography and sculpture to architectural models are displayed side by side with some theme-scaping done by room. The entrance hall, filled with large scale sculptural pieces, provided a welcome change from the formulaity of the other galleries, which lean towards a more glamorised auction room (many of these works are in fact available to buy, with the catalogue listing prices and a board outside stating availability). 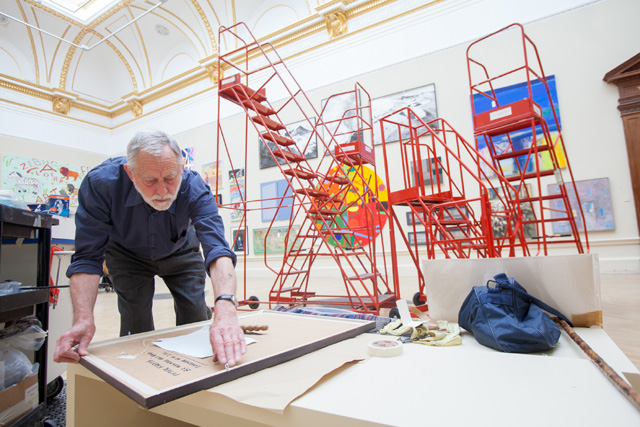 One of the appeals of the Summer Exhibition is the sheer variety of works on show. Complete newcomers sit alongside some of the great names in the current market, with works by Anselm Kiefer, Richard Long and Sir Anthony Caro on display here, to name but a few. However, it is the lack of information plaques alongside the works that causes the playing field to be levelled, if you’re feeling generous, or causes reputable names to be dismissed and their works overlooked. For example, I sat in front of Richard Long’s fabulous Cornwall Spiral (catalogue no. 639) for at least fifteen minutes and not one other person acknowledged it in that time, which left me feeling oddly hollow.

There are far too many works to recount room by room, however, I have picked a few pieces and hangs that I think are worthy of mention. My favourite room was undoubtedly number two, characterised by prints and multimedia pieces that questioned the construction of art by using unconventional materials and playing with texture. Works were created by printing on feathers or leaves (155) or involved using books in intricate folding patterns (153) or illustrative cut outs. Another wall saw modern interpretations of the city of London using the more dated form of woodcut and drypoint printing. Anne Desmet created a series of images (232-234, 238-40) inspired by the Olympics and printed onto A-Z maps, while Adam Dant’s satirical view of Sloane Square (249) struck a chord as I live nearby. 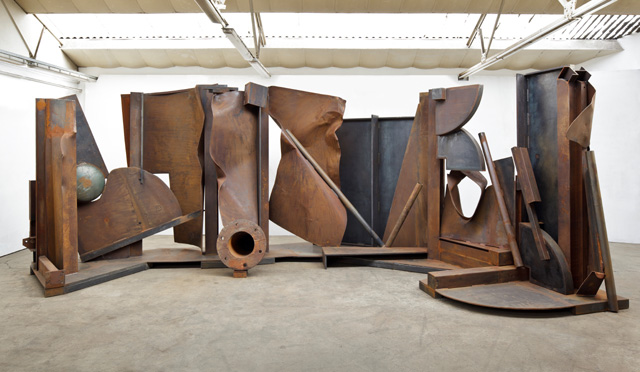 Aside from these printed pieces, it was the larger scale installations that caught my eye. Perhaps it was their inherent ability to stand out and command presence within a room or their spacing away from the more concentrated wall hangings. David Mach has created a series of three large scale vases (921-3) which are decorated in elaborate patterns using push pins in a series of colours. The smallest one appears to be inspired by Ming dynasty Chinese antiquities using only blue and white to create delicate patterns, while the largest used a white background and abstracted patterning in bright colours that recalled the work of the mobiles of Joan Miro. I was also fascinated by Dreamcatcher by Marilène Oliver (534), a large installation piece made from ostrich features, laser-cut acrylic and mesh fishing wire that presented the fabric of the body suspended over a bed of feathers. Again the visitors were encouraged to engage with this work from every angle and its tangible 3D nature made it more visually arresting. 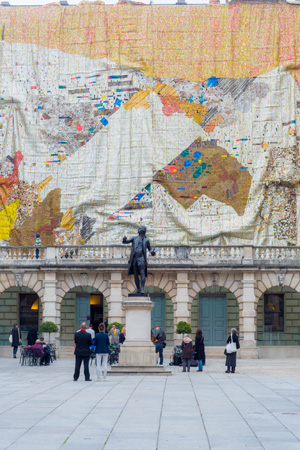 The final room contains a series of tapestries by the controversial artist Grayson Perry; the works bring a sense of coherence and unity to a surprisingly fragmented and, in places, disjointed exhibition. The six works are designed in homage to the great works of Hogarth but feature a modern examination of the human condition. They are delightfully intricate and vibrant to look at with words intertwined amongst the figures and created with a clearly wry sense of humour, and yet there was something about them that just didn’t appeal to me. Perhaps it is Perry as a figure, or the fact that the works are not for sale, which is somewhat the point of the exhibition, but I would of course encourage you to view them for yourself.

This is my first visit to the Summer Exhibition and I have gathered that it is always a rather mixed bag. The exquisite and interesting pieces which I have detailed above notwithstanding, I left almost a bit relieved to no longer be quite so suffocated by so many different forms of art.

Two final points to ponder; firstly make sure you spend some time in the courtyard appreciating El Anatsui’s large hanging piece that shrouds the building’s exterior – an exciting artwork made using such obscure materials as aluminium bottle tops and copper sheeting, it dazzles when the sun streams in. And finally, look up to higher registers of the Wohl Central Hall, into which you enter; if you do, you will be met by an array of classical busts peering down, with an element of seeming disdain at the new interpretations of art that comprise the exhibition. They might, on this occasion, represent some of the more established names in the art world, whose opinion on this year’s exhibition, the 125th anniversary, have been less than favourable.

The Summer Exhibition at the Royal Academy runs until 18th August 2013. For more information and tickets, visit the website.