Trending
You are at:Home»The Culturist»Books»The Constant Rabbit
By Anna Selby on May 26, 2020 Books

So here we all are, stuck in lockdown and in need of a laugh. Enter Jasper Fforde. His novels are sometimes described as “fantasy” but Fforde is far too original to be defined by a genre. His particular skill is to create a parallel universe where many things appear familiar until we find ourselves taken on a flight of fancy to a present day where England and Imperial Russia are still fighting the Crimean War, Wales is a separate socialist republic and literary criminals hide out in books, manipulating their plots.

This is the premise of seven novels by Fforde featuring Thursday Next, literary detective, starting with The Eyre Affair (where she befriends Mr Rochester and restores the true ending to Bronte’s novel in the teeth of the dastardly plotting of the sinister Goliath Corporation). 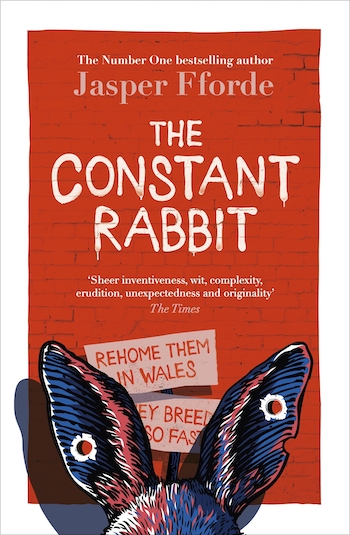 The Constant Rabbit, Fforde’s latest, is built around an entirely new premise and without the marvellous Thursday. This time, the parallel universe revolves around the Inexplicable Anthropomorphising Event. As a result of this happening, there are now 1.2million human-sized rabbits with many human attributes. So they talk, wear clothes, live in houses (sometimes) and have jobs. However, they have rabbit characteristics, too. They have a language and a religion of their own – key to this is the (possibly divine) Venerable Bunty – and a code of ethics far more humane than anything the humans have managed to come up with.

The humans, in fact, are profoundly anti-rabbit and the UK Anti-Rabbit Party is now running the country, Nigel Smethwick as Prime Minister with 2LegsGood as a thuggish back-up bearing a remarkable resemblance to the BNP. Their plan is Rehoming behind walls too high for even the most energetic escape bounce.

The Constant Rabbit is less anarchic than Fforde’s Thursday Next novels. This not to say there aren’t plenty of laughs here but there is something of the parable about this one. Think Bugs Bunny meets Pilgrim’s Progress. With a love story. And some thumping good jokes (and cuniculture double-entrendres). Sorry can’t help it. Those word-plays breed like, well, you know…

The Constant Rabbit by Jasper Fforde is publishing by Hodder and Stoughton. £20 hardback and ebook. More miscellany and Adventures in Jasperland can be found at www.jasperfforde.com.