Trending
You are at:Home»The Culturist»Books»The Fires of Lust – Sex in the Middle Ages
By Anna Selby on November 20, 2021 Books

Sex in the Middle Ages? Nasty, brutish and short, right? Well, we’ve all seen Game of Thrones. For a more authentic and in-depth look at the subject, though, Katherine Harvey, Honorary Research Fellow at Birkbeck, University of London has produced that rare hybrid – a scholarly page-turner.

Harvey explores the way medieval thinking regarded sex – and this comprised a combination of the religious with the medical. Of course, medieval medicine was very different from ours and, based on the humours, it meant that getting sex right was a tricky business. You could, for instance, depending on your predominant humour, die from having either too much sex or indeed too little. And then there was the inevitable consequence of sex – pregnancy. 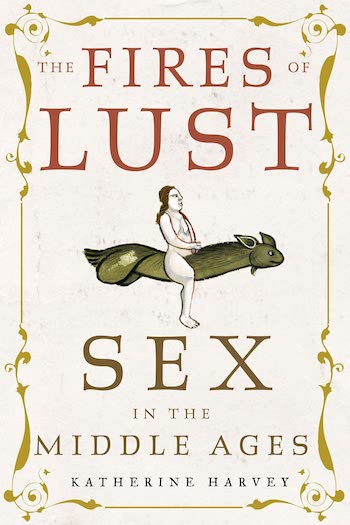 Given the view of the Catholic church – that the purpose of marriage was to procreate – contraception and, of course, abortion were forbidden. That, however, did not mean they did not take place. Contraception could be achieved by various interesting methods – amulets were popular, carrying, for instance, a piece of a mule’s ear, or the small bone from a female donkey’s vulva, or the testicles of a male weasel or elephant dung. Quite where a European would find elephant dung in the Middle Ages is a mystery in itself.

So Harvey clearly brings a fun element to the subject but her research is assiduous and wide ranging from the legal case for prostitution to the question of incest. Obviously, this was disapproved of but the definition of incest itself was rather different from our own. It extended to anyone who was related by blood, a godparent or any of their family and anyone (and their extended family) who had had sexual relations with anyone at all in yours. It certainly narrowed the field.

Chastity and the religious life feature largely, too, and it will come as no surprise that the inhabitants of monasteries and convents often fell short of their vows. Abstinence and virginity generally were regarded as the ideal, however, and, if you couldn’t manage that, marriage was the next best thing. Even within marriage, there were rules with the Church insisting that the missionary position was the only one possible, particularly as they believed this meant conception was most likely.

Adultery was not just frowned upon, it was punishable by fines, corporal punishment or even execution. Homosexuality was regarded as the cause of plagues. Sex with someone of a different race or religion was unthinkable – and once the Crusades began this was particularly focused on Islam and the unnatural sexual acts of Muslims who would rape virgins and force Christian women to become their concubines. “Such descriptions of depravity,” Harvey points out, “were designed to anger European men and thus to persuade them to take the cross.” So sex was even used as a political weapon.

Funny, scholarly and fascinating, this could be the ideal Christmas gift book. There could be some eye-watering moments on Boxing Day, though. For instance, there’s the advice given by Arnau de Vilanova for men wanting to replenish their sexual energy. “Let him sit naked in a clean tub in which 30 or 40 eggs have been broken and draw all these eggs in through the anus.” A cure? More likely to put the poor bloke off for life.

Fires of Lust – Sex in the Middle Ages by Katherine Harvey is out now in hardback, published by Reaktion Books. RRP £20.