Trending
You are at:Home»The Culturist»Books»The Wolf Den
By Anna Selby on June 29, 2021 Books

The “lupanar” had two meanings for the Romans. Literally, it is a den of wolves. More figuratively, it is a brothel and a “lupa” can be both a she-wolf and a prostitute. The Wolf Den is the story of one such lupanar in first century Pompeii and, in particular, it is the story of Amara, a lupa who was once the refined daughter of a Greek doctor.

Amara is already installed in the town brothel when we meet her in AD74 (and keep note of that date, it’s just five years before the city is destroyed by the catastrophic volcanic eruption of Vesuvius in AD79). We hear in flashbacks of her descent from comfort and respectability as the death of her father plunges the family into poverty and her mother is forced eventually to sell her as – she thinks – a house slave. Instead, her buyer first makes her his concubine and, when his wife wants rid of her, he sells her as a prostitute. She is taken from her native Greece by ship to Italy and sold naked in the slave market to Felix, the owner of Pompeii’s town brothel. She has reached her lowest circle of hell. 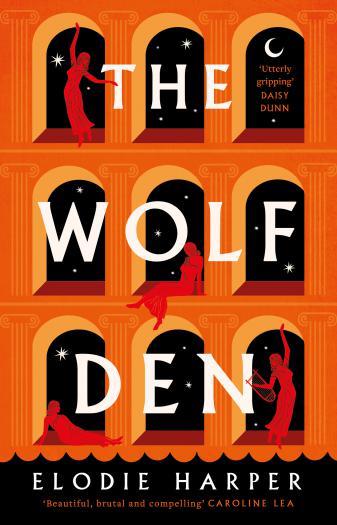 Harper tells this desperate tale with a clear-eyed candour that has much in common with the down-to-earth prostitutes’ approach to life. There is brutality, fear, poverty here but there are also snatched moments of freedom at the Games and the Saturnalia or the comradeship of the lupas who share a meal at the local tavern or gossip together at the baths. There are moments of raw humour. There is always, too, the faintest glimmer of escape.

She meets Menander, a fellow Greek, but he is also a fellow slave and their chance of a future together is hopeless. Then, when she is entertaining at a party (her middle class upbringing means she is skilled on the lyre), she meets Pliny, the Admiral of the Fleet, who rents her for a week from Felix. He takes Amara to a house where she is brought figs and sweet wine in a garden full of flowers and fountains. In return, she reads aloud to him from Greek scrolls he is studying. Delirious with hope, she begs him to buy her (or, even better, buy her freedom) but Pliny is nonplussed – he already has more than one secretary, why would he need her? Then there is the young aristocrat who seems to be in love with her, but will he keep his promises?

This is a book that draws you in fast (I read it in a couple of days) and combines the story of a compelling heroine with some excellent historical detail (not least about the place of women in the classical world). No spoilers here, but suffice to say that the ending is full of surprises – or perhaps shocks would be a better description. The last page holds a cryptic message, a cliff-hanger for the next book – because this is to be the first of a trilogy. We’re now at the end of AD74. As I said, keep an eye on that date…

The Wolf Den by Elodie Harper is out now in hardback, published by Head of Zeus, priced £16.99. For more information, please visit www.headofzeus.com.