The Cunning Little Vixen is an opera that presents both audience and opera company alike with a conundrum. Is it a fairy tale? Is it a morality tale? Is it a satire on human behaviour told through animals? Is it a tragedy (major spoiler alert: the Vixen does get shot)? Is it a testament to the true meaning of love? Is it a peon of praise to the natural world?

It is all of these and the last is evidenced in some of Janacek’s most soaring, lyrical music about spring, the enchantment and mystery of nature and its circle of life. I have to say, first of all, that the City of London Sinfonia played this ravishingly under the baton of Jessica Cottis. The staging put the orchestra quite literally in the middle of the action between the main stage and the runway. This works extremely well, alongside part of the audience on stage and the cast frequently coming through the main auditorium. (No Covid distancing rules being broken, of course.) 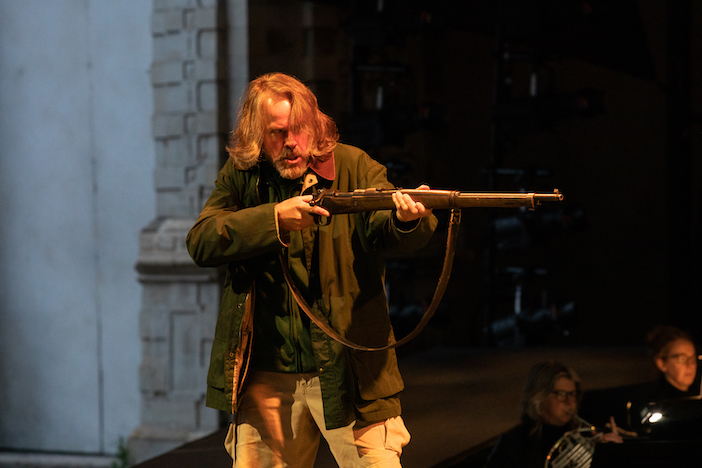 Grant Doyle as The Forester in Cunning Little Vixen

Ms Cottis seemed to have (though, of course, this may just have been a trick of the lighting) a dark red ponytail and this could surely not have been more appropriate in an opera all about the appeal of the glamorous redhead. The Vixen is, of course, a redhead, but there again so is Terynka, the (human) love of the local Schoolmaster as well the Poacher. She is admired, too, by the Priest and the Forester and it is the latter who captures the Vixen as a cub to keep as a pet. As the Forester, Grant Doyle is a mesmerising presence on stage and his final appearance, singing lyrically of the forest and the wonders of nature, is quite beautiful.

Doyle could, in fact, easily dominate the evening. However, there is also the Vixen herself. Jennifer France plays Vixen Sharp Ears with boundless energy and verve and she’s in glorious voice. Wily, untameable and a proto-feminist, she is certainly no pet. She bites the Forester’s children, evicts the Badger from his sett so she can take it over, repels and mocks the Forester’s dog and tricks his chickens (while encouraging them to rise up against the Cockerel and their fate as egg producers). 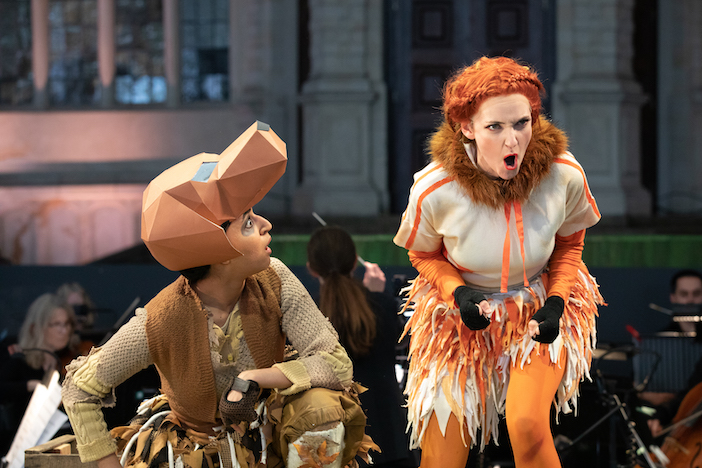 The eggs that the chickens are clutching to their bosoms are yellow balloons (burst by Vixen) and this is typical of the pared-down styling throughout. The chorus come on in green dungarees and yellow T-shirts to move the few props on and off the stage. The single most important of these is, in fact, a green recycling wheelie bin that is everything from the Badger’s sett to the bar at the local inn. The delightful children’s chorus wear cardboard ears when they’re fox cubs, or wave simple streamers as brightly coloured dragonflies. When Fox woos Vixen, he brings her presents not of dead rabbits but Pret takeaways. Paper confetti pours onto Vixen and Fox (a dashing, full-throated Julia Sporsen) as they marry in the joyful ending of the first part of the evening – their success in love a stark contrast to the human relationships on view.

Quite a few liberties have been taken with the libretto by Norman Tucker both to update it and bring in a few laughs. The best of these is when Vixen is having a rare moment of self-doubt that she can be beautiful or indeed lovable. The Fox responds that she is so wonderful that in the future, men will write about her and (with a nod in the direction of conductor Jessica Cottis) women will conduct operas about her. 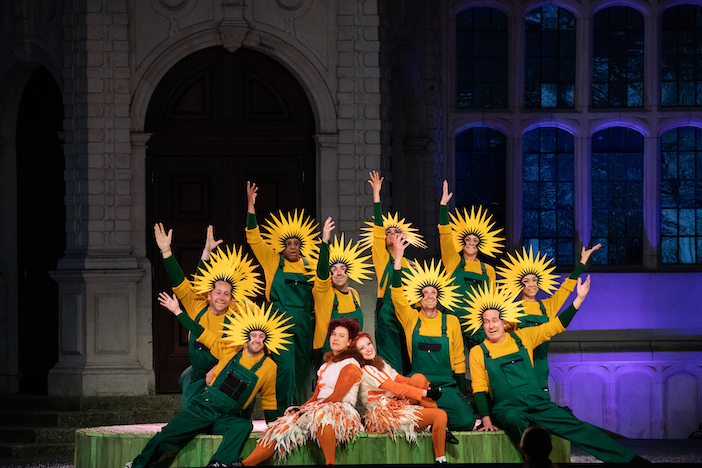 It’s an evening full of jokes and good humour, with plenty of colour and energy and a strong cast including Ann Taylor both as the Forester’s long-suffering wife and Owl, Charne Rochford as the Schoolmaster disappointed in love and Ashley Riches stepping in at the last minute as a formidable Poacher.

Director Stephen Barlow has pulled off no mean feat here, blending the magic realism of Janacek’s hymn to nature with a poignant story of love and death and a bucketful of wit. An OHP classic.