Trending
You are at:Home»The Culturist»Music»Onegin at Opera Holland Park
By Toby L. White on July 21, 2012 Music

Onegin. It makes such a rich sound when you say it. Onyaygin. Even if you’re unfamiliar with the story, it’s as if its very name tells of sadness, and from the opening bars of the overture, with its descending minor key, you know you’re in for an emotional, wrenching ride.

I won’t assume everyone knows the story to Pushkin’s verse – I confess, I was only vaguely familiar with it – so, in a nutshell, it’s about a heartless, self-centred and, frankly, rather dislikeable fellow who spurns the innocent advances of a young woman, seduces her sister – his best friend’s fiancé, naturally – out of boredom of all things, then glibly defends his actions prompting the latter to force a duel in which Onegin kills him. Years later, retribution arrives when he meets his young admirer again, only now happily married and not so young, realises he loves her but is finally spurned himself. Cheery stuff, eh?

But it is beautiful. Imagine the best of Tchaikovsky’s delicate ballets, the romance of his symphonies and the grandeur of his crowd-rousers like the 1812 Overture and you get somewhere near to what you’re in store for in Onegin. 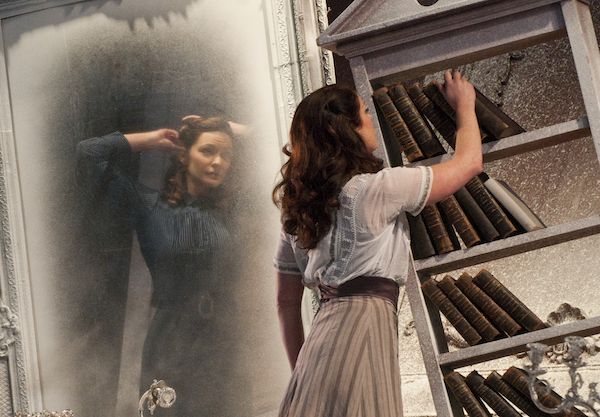 Opera Holland Park’s venue was a gift for setting the story; the side of Holland House that makes up the rear of the stage doubling neatly for a grand country house requiring nothing more than a series of fallen, dusty interior furnishings to hint at the tragedy to come. And, fortuitously, as the first half played out while still light outside, returning from the interval, as darkness descended it similarly matched the change in mood in the story. A designer couldn’t have planned it better.

Some clever interpretative touches lift us out of the more straightforward romanticism and give a bit more of a dramatic backdrop; throughout much of the first half, Onegin walks among the action, as if in flashback, brooding and melancholy. Similarly, the chorus offer a token historic spin – there’s an addition of them paying tithes that pre-empts their becoming workers in the second half and the Russian revolution, at one point a huge chromatic portrait of Lenin is revealed as the chorus form a phalanx across the stage. As anachronistic as it may be (Tchaikovsky died in 1893 and wrote with commissions from the Czar) it’s a tellingly symbolic interpretation; the drab, regimented, soullessness of that era reflecting Onegin’s own barren state.

The most striking thing about this production, however, is that it is cast perfectly. To such an extent that the performances, rather than simply being 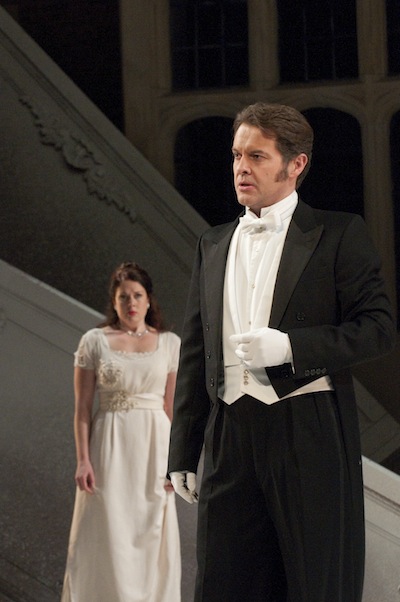 about the singing, are played out with such intensity that you really are caught up in their respective plights. Opera so often falls short in this regard, where acting is either overshadowed by song or else overdone as to become melodrama. Even if you removed the music, the cast here would deliver a spellbinding, utterly compelling drama. With the music, well, it becomes sublime.

The letter scene at the end of Act II is the opera’s tipping point, as Tatyana conveys her feelings to Onegin – during a wonderful interplay with the orchestra, incidentally, as the French horn responds to her declarations. Convinced of his intentions (“His honour is my guarantee”), Anna Leese handled this with such an evocative surge that, even though I knew what was coming, I found myself genuinely disliking him. Similarly, Peter Auty’s Lensky plays out the hapless romantic, bounding after Olga like a lovesick teenager, it makes his shock at Onegin’s advances on her like watching a car crash in slow-mo. It’s compelling stuff. Solid performances, too, from Graeme Broadbent, eliciting a cheer from the crowd following his solo, Hannah Pedley (Olga) and Anne Mason as Mrs Larina, and Mark Stone’s Onegin, given just the right amount of insouciance throughout until his crushing dejection at the end; as the lights blacked with he and Tatyana on stage, there was almost a beat of disbelief before the audience erupted into applause, such were we carried along.

Credit, too, must go to the London Sinfonia ably led by Alexander Polianichko. Tchaikovsky’s score is tellingly evocative, sure, and features bundles of crowd pleasing turns amid the drama; the waltz and the Polonaise to name but two, and Polianichko’s command of the score skips comfortably between moods and movements.

This is a tale of love in many guises; the innocent, the blind, the familial, and with a production as engaging and convincing as this, as well as a fabulous evening’s entertainment, there are a few things we might just learn about ourselves, too.

Onegin at Opera Holland Park runs until 4th August. For more information and to book tickets, visit the website.