Every year, Opera Holland Park likes to surprise us during its summer season with something a little out of the ordinary. This year, they’ve doubled the surprise with two short operas, both virtually unheard-of, as a double bill. In fact, they were planned for 2020 and, for obvious reasons, were postponed.

Both star, as originally planned, the remarkable Anne Sophie Duprels, a favourite at OHP and deservedly so. The double bill offers her not only an aria with just the tiniest hint of Tosca but the diverse roles of fallen woman, jilted bride and weird witch. For this is a night of grand guignol – murder, revenge, grand passion, the supernatural. If you’re expecting a carefully worked out plot, you might be disappointed. If you’d prefer high drama and splendid singing, you’re in luck.

First up is Margot La Rouge. Written for a competition in 1902 by Delius (he didn’t win), it is very much in the verismo style, popular for its gritty realism rather than the often more rarefied operatic subject matter of the day. And it’s certainly gritty. The action takes place in a bar where a group of prostitutes wait for customers. Lilli (a striking Sarah Minns) is jealous of Margot (Duprels) and vies for the dubious affections of L’Artiste (on fine form as a suitably brutish Paul Carey Jones).

When a group of soldiers arrive, one sees Margot and gradually recognises her as his childhood sweetheart. There follows a passionate and joyful reunion between Thibault (Samuel Sakker) and Margot (and a lovely duet in a piece otherwise somewhat lacking in good tunes) but Lili fetches L’Artiste and things go rapidly downhill. 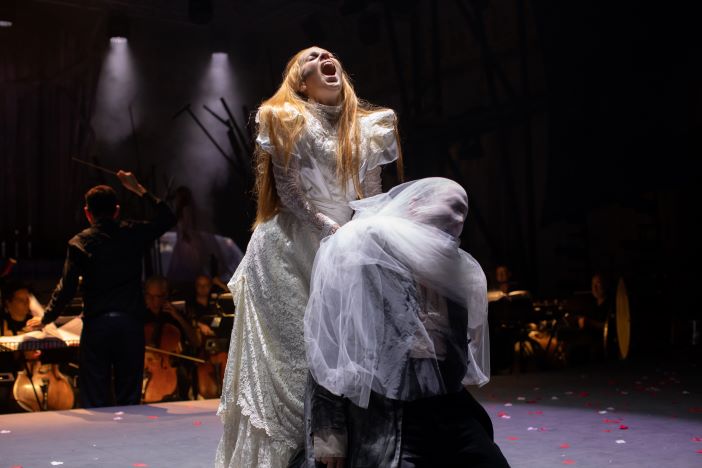 Next comes the two-act opera-ballet Le Villi. If you know the ballet, Giselle, then you know who the Villi (or Willi) are: the ghosts of jilted girls who force false lovers to dance to their deaths in the forest. The ballet came first by some decades but the Villi were clearly a popular romantic notion and they dance here to great effect – I particularly like the great swathes of gauze (finally used by Duprels as a weapon of revenge).

In fact, takis’ whole design is impressive. Both operas use the same wooden shack on a revolve that becomes by turns a garden, a bar, a church and a graveyard – simple and effective. The plot of Le Villi is also pretty simple and the characters only barely sketched in. However, there is some hints of the Puccini to come and I did hear a whisper of Tosca in Anna’s (Duprels) haunting aria in her garden. There is a particularly strong duet, too, with Roberto (Peter Auty in fine voice) and Stephen Gadd as Anna’s father has great presence whether singing or narrating (or indeed dancing).

The Opera Holland Park chorus are as strong as ever, particularly in the rather joyful opening of Le Villi and the City of London under Francesco Cilluffo played with gusto, especially the Puccini with all its shades of greatness to come. Director Martin Lloyd-Evans managed the necessary gritty realism in Margot but produced a quite magical Le Villi – with a macabre dance scene and Duprels morphing from tragic innocent to terrifying witch. A chillingly delightful evening.