Trending
You are at:Home»The Culturist»Music»War and Peace – Welsh National Opera at Covent Garden
By Anna Selby on July 24, 2019 Music

Let’s face it, War and Peace is a pretty big book. Attempting to compress it into a squeak under four hours of opera is, therefore, a pretty big ask. Director David Pountney has certainly given it his best shot, though. For a start, there’s a cast of thousands – no exaggeration if you include the war scenes from Bondarchuk’s 1966 film projected behind the singers for most of the second act.

The Welsh National Opera chorus is vast, too, and Trojan in its efforts. Packed on to the Covent Garden stage, this is a massively demanding night for them and they sing with passion and ferocity – undoubtedly the stars of this particular show.

They do, though, have a problem. Prokofiev’s opera is deeply flawed and, for much of Act II, descends into propaganda. Written in the 1940s when the Germans, rather than the French, were Russia’s invaders, you perhaps unsurprisingly hear a lot about the invincibility of Russian fighters, right down to babushkas armed with pitchforks – who mix in surprisingly well with WWII-uniformed soldiers of Prokofiev’s own era. 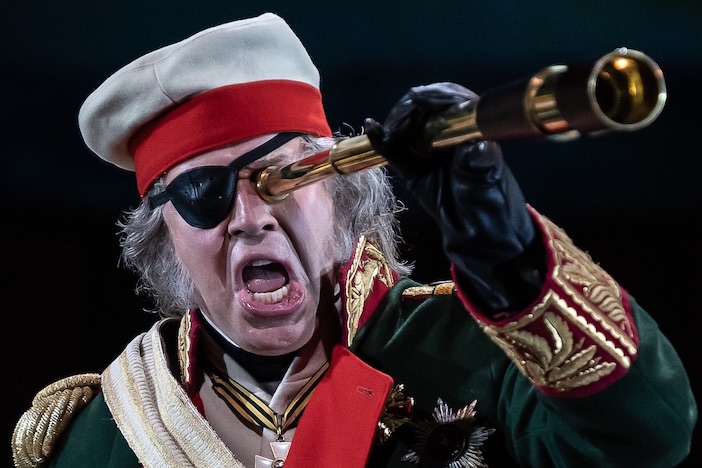 French and German officers (the latter as the disastrous advisers to the Russian high command during the early part of the war) are turned into ludicrous caricatures and the great sweep of Tolstoy’s novel is lost and replaced by a series of vignettes – Napoleon bewildered at Borodino, looting soldiers in Moscow, the rescue of Pierre by the partisans.

Even in the first act, there is a whiff of propaganda but it is the romance of Natasha Rostova (a luminous Lauren Michelle) and Prince Andrei (Jonathan McGovern in fine voice) that takes centre stage. There are echoes of Prokofiev’s Romeo and Juliet here that lift the heart, a ballroom scene with a still intensity as the world of the lovers turns, Tolstoy himself penning his epic tale, the louche salon of Helene, the bungled attempt of the abduction of Natasha by her brother, the lascivious Anatole (a suitably caddish Adrian Dwyer). 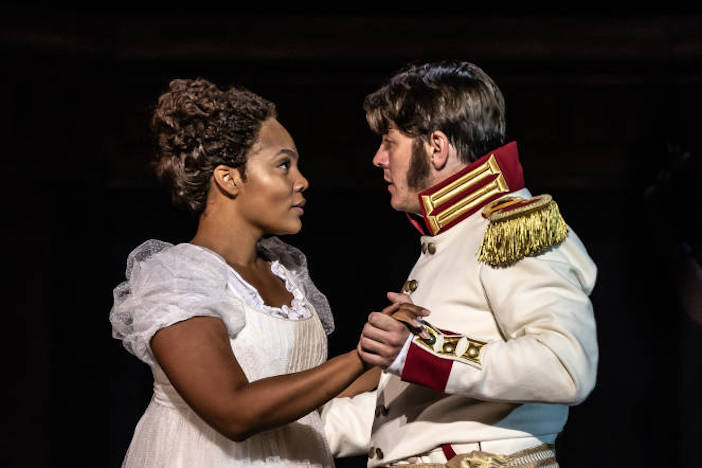 Lauren Michelle as Natasha and Jonathan McGovern as Andrei

Pierre (a bravura performance from Mark Le Brocq) makes a brief appearance but isn’t really in evidence until Act II. And this, of course, is part of the underlying flaw in this opera. Everything becomes a brief episode, characters cannot develop, some major characters are lost entirely (Natasha’s two brothers have been written out leaving two female characters – Princess Marya and Sonya – seemingly without purpose). Surtitles introduce the characters and the settings to minimise the confusion.

If there are quibbles with the opera itself, though, WNO’s enthusiasm and determination go a long way to make up for it. Under Tomas Hanus, the WNO Orchestra plays with passion. Designer Robert Innes Hopkins floods the stage with colour and movement. And the score is based on musicologist Rita McAllister’s careful restructuring of Prokofiev’s original version of the opera. Above all, David Pountney’s intertwining of the Napoleonic and Second World Wars make this a fascinating production on the grandest of scales.

A word of warning. There is only one night left to see this – tonight – on this super-short run. And, just a thought for future planning of Prokofiev operas. How about his witty side. My money’s on Love for Three Oranges.