Trending
You are at:Home»The Culturist»Music»Wonderful Town at Opera Holland Park
By Anna Selby on July 2, 2021 Music

You have to take your hat off to Opera Holland Park. Not only have they come up with a brilliant solution to the problem besetting all entertainment venues – social distancing – they have made it charming. So out go the usual rows and the two tiers of previous years; and in come a wide variety of single chairs from gilded to ladderback complete with assorted cushions and (in case you’re feeling chilly in the second half) rugs.

The chairs are paired (not matching, of course) with spaces between and they’ve either come from the company’s own stock of stage chairs or been borrowed from other theatres. Just so everyone knows which belongs to whom at the end of the run, the chairs belonging to other companies have a card ticket tied to their backs with a string. They look like old-fashioned luggage labels. Like I said, charming.

And charm is in the air right now at Holland Park. In a break from their usual opera productions, OHP have collaborated with Quick Fantastic on the Leonard Bernstein musical, Wonderful Town. Well, I say Leonard Bernstein but this was first a collection of short stories and then a play in the 1930s before a musical was ever thought of – written in the 50s with the writers of the original play (Joseph Fields and Jerome Chodorov) and two lyricists (Betty Comden and Adolph Green). 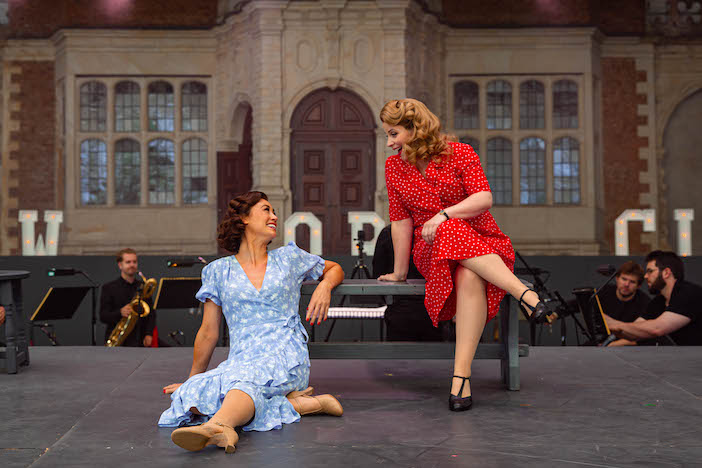 The Wonderful Town of the title is New York and this is the story of two sisters who leave Ohio to seek their fortunes in the big city. Ruth is a writer trying to get a job on a newspaper. Eileen wants to be on the stage – though her principal characteristic is her irresistibility. Men quite literally fall at her feet.

Bernstein had four and a half weeks to write the musical, all the time bearing in mind that the star, Rosalind Russell, told him her vocal range was “only four good notes”. This was certainly not a problem for the current production’s Ruth. Louise Dearman has a big voice and plenty of sass to carry off the wise-cracking Ruth and is centre stage for the two biggest hits of the night. In One Hundred Easy Ways (to lose a man) she tells us how a girl should never appear too clever (this was written in the Thirties, remember). And in Swing, alongside most of the company, she brings home the best song and dance of the night (with a hint towards West Side Story, yet to come), much of it sung without the benefit of the orchestra. 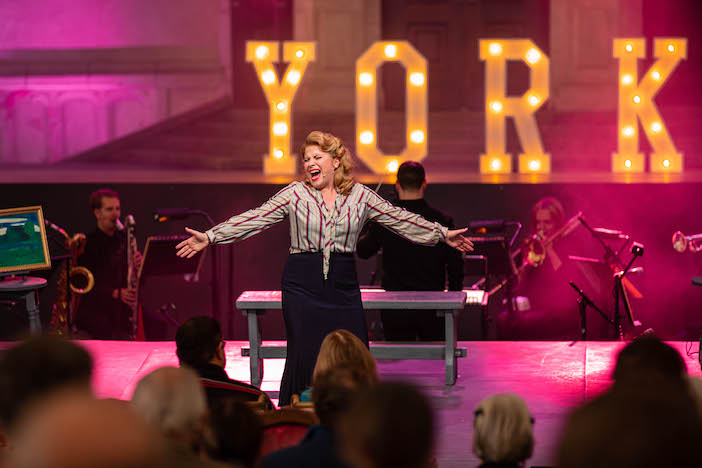 The orchestra itself under conductor Alex Parker (much reduced from the size you’d normally expect here) produces a great big (and I mean big) band sound for Bernstein’s dazzling score. And the company works brilliantly as an ensemble, stepping in and out of a multitude of roles. It’s hard to pick out special credits from such a good line-up but I must mention Billy Nevers as the dumb football star – a joy. As Eileen, Siubhan Harrison was the perfectly insouciant beauty who really did know her own power. And Ako Mitchell as Bob Baker was a commanding presence, delightfully unravelled by love.

The audience might have been less than half the normal capacity but it went wild. This is one uplifting show but you’ll have to be quick. It’s a three night run and the last one is Saturday.

Wonderful Town runs at Opera Holland Park until Saturday 3rd July 2021. For more information and tickets, including details of other productions in the 2021 season, please visit www.operahollandpark.com.