Trending
You are at:Home»The Culturist»Theatre»Anastasia at Pushkin House
By Will Hunt on April 16, 2012 Theatre

Staging a production in a venue that reflects its content and themes is always something of a double-edged sword. More often than not the venue amplifies the show’s individual atmosphere and the audience are even more susceptible to finding themselves fully immersed in the drama onstage. However, when a weaker production fails to live up to complimentary surroundings its shortcomings are highlighted to a greater degree than usual. Unfortunately Kate Sellars’ Anastasia at Pushkin House falls into the latter category. 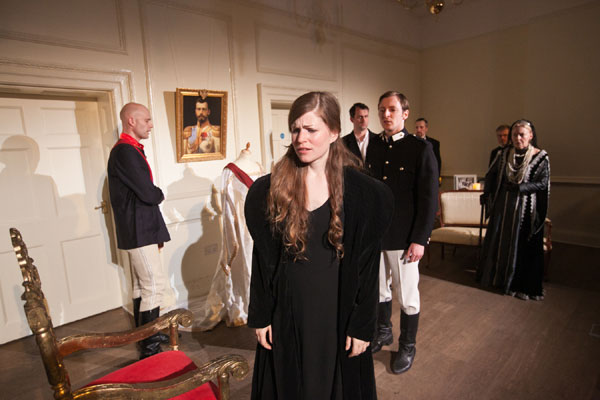 The story of Tsarist Russian exiles passing off an orphaned girl as the titular princess in 1920s Berlin is adapted by Sellars from Andrei Vironov’s translation of Marcelle Maurette’s crowd-pleasing play. Ascending the stairs of 5A Bloomsbury Square to take my seat in an upstairs salon I certainly felt transported to that celebrated era characterized by decadence masking desperation; however, subsequent uneven performances and mistaken technical decisions did little to sustain this and ultimately did the setting a disservice.

The text itself is problematic. The first act struggles to gain momentum and once it does the play settles into a formulaic routine that sees various melodramatic set-pieces breaking up each character’s individual memories of pre-war Russia. The first of these remembrances does provide a fine moment of stirring nostalgia, as the three conspirators conjure up a lost world for their ‘princess’ by standing at attention and singing the treasured national anthem of the old country, but, until the arrival of Eileen Nicholas’ magnificent Empress, there is little dramatic substance for audience to get its teeth into.

Nicholas’ performance is the beating heart of production; she moves beautifully between fabulously grand imperial matriarch and lonely old woman longing for home and a life long-since over. Understandably Alice Bird steadily grows into her curious role as the girl at the centre of the conspiracy throughout the evening and there are other noteworthy performances from Paul Croft as the beleaguered Isaac Rabinovich and Morris Perry as the dignified Chamberlain. Bird’s scenes opposite Nicholas’ as her disorientated ‘Grandmama’ are particularly touching. Nonetheless, for a story concerned with a young wastrel’s ability to portray a European princess, it is ironic that many of the Sellars’ cast are unconvincing in their roles themselves. Andrew Byron’s languid Bounin finds second gear by the end of the first half but struggles to develop further, coasting through many scenes as if frankly bored by the situation he finds himself in. As Pavel Alexandrovich, Adam Wittek exudes desperation but it is an uncomfortably mannered performance that seems under-rehearsed. 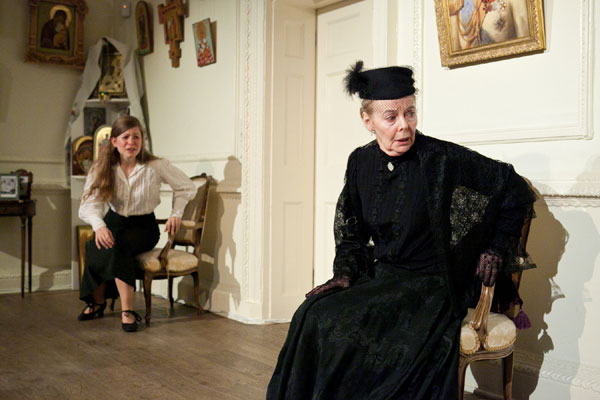 Above all neither text nor cast is well served by Rob Mills’ lighting design. The elegant, timeworn room is constantly washed in a harsh, unnatural white light; beyond the first scene no onstage lighting is used to add tone and depth to the proceedings and the wonderful effect of the guttering candles on every surface greeting the audience filing back in after the interval is quickly snuffed out as the lights rise to a level where they can longer register. This lack of care and craft is evident in some aspects of the set itself also. When presenting a period piece in a Georgian townhouse for which you have sourced a large number of beautiful Russian icons, it surely requires very little effort to complete the picture by covering up a prominent plug socket and trimming the over-hanging picture wire. Unfortunately in an intimate setting such as this these things register and this lack of attention to detail characterises the production overall.

A patchy evening to say the least and one that, on paper, has real potential. Though Maurette’s characters seem relentlessly determined to conjure up something of the drama and splendour of years past Sellars’ and her ensemble ultimately fail them and their audience.