Trending
You are at:Home»The Culturist»Theatre»Going for Gold: Chariots of Fire
By Rachel Fellows on July 17, 2012 Theatre

I’m exhausted, having just watched Chariots of Fire on stage, so Lord knows how the poor actors feel. Ecstatic, I would imagine, since this production is justly receiving rave reviews for its innovative and enrapturing portrayal of the 1981 film. Whether you saw it in the cinema when it first came out or were shown it at school, you’d be hard pushed to find anyone who hasn’t heard of Harold Abrahams or Eric Liddell and their journeys to the 1924 Olympic Games, held in Paris. At the very least, you’d have to live on Mars not to recognise the music in all its synthesized glory. Thankfully, the soundtrack lives on at the Gielgud Theatre, to where the show has transferred from Hampstead, savouring and celebrating every bit of the original. 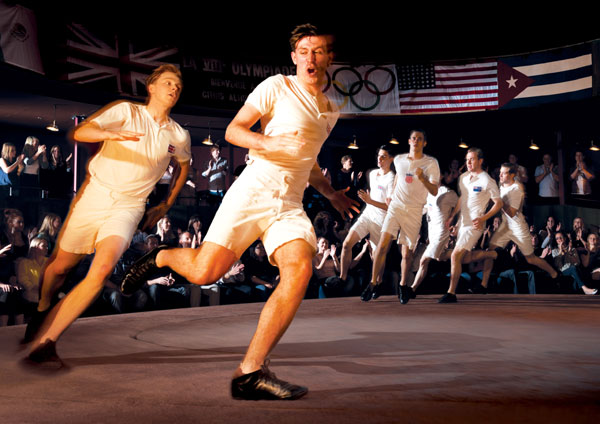 The theatre itself has been given quite a makeover, allowing for an all-encompassing experience as a spectator (and I mean ‘spectator’). I was rather curious about what sort of view to expect from the “Stadium Seats” as I, for one, had never heard of those and they didn’t appear to have a shiny gold signpost on any of the doors, like the other sections. But, creeping round the back of the stage to take position in one of the three rows placed behind the actors casually limbering up in the middle, I realised that I was going to be right in on the action in said stadium, which was completed with advertisements and scoreboards up above. The circular stage comprised two revolving rings, creating treadmills for the running and a turning platform that allowed the show to be played out at a full 360 degrees. Removing rows from the normal stalls provided greater running distance and you had actors whooshing past you left, right and centre – literally.

The choreography of all this was breathtaking, and it was hilarious to see the wide eyes and gaping mouths of the viewers placed opposite as the runners executed their races with such startling precision, weaving in and out, sticking on rhythm and dashing around in a frenzy, yet always ending up in the right place. The races may have been slightly scaled down but it took no leap of the imagination to live them along with the athletes; to hear their heavy breath as they ran and to feel the tread of their feet beneath the seats bestowed an interactive luxury not afforded to the medium of film, even in this age of 3D. There’s also the anxiety of live performance to contend with – Abrahams really has to win the Trinity Run within the gongs and Lindsey mustn’t knock the champers off the hurdles as he leaps, so it’s heart in the mouth stuff. 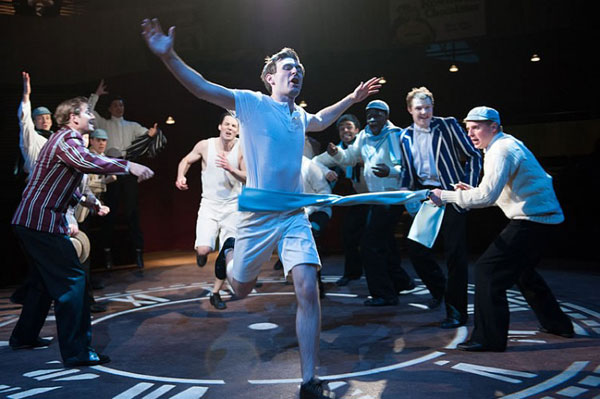 Speaking of Lord Lindsey, Tam Williams steps into Nigel Havers’ shoes with the appropriate swagger and brings a hint of Wilde and Waugh to this gentleman, who adds comic relief by sauntering up to the start line, cigarette on the go. Harold Abrahams is played by James McArdle, who speaks with the fervour of a seasoned Shakespearean actor well beyond his years. Abrahams’ battles both against the institutionalised anti-Semitism of the time and his personal demons aren’t easy ones to carry, but you feel in totally safe hands with McArdle, and I think we’ll be seeing a darn sight more of him in future. Jack Lowden’s Liddell is kindly yet determined and he creates an instant, palpable rapport with co-stars and audience alike. When you are reminded of Liddell’s fate at the end of the play, the ensuing sense of sadness cannot be unrelated to the sensitive portrayal of his character.

The complex and difficult themes at this tale’s core are highlighted with impeccable care and reverence. On the flip side, there are genuinely hilarious moments to be had and these are made the most of too, creating a balanced production that is thought-provoking but definitely doesn’t take itself too seriously. The funniest characters are those that could easily have turned into caricatures, but with Simon Williams, Nicholas Grace and Nicholas Woodeson taking them on, there was no chance of that. 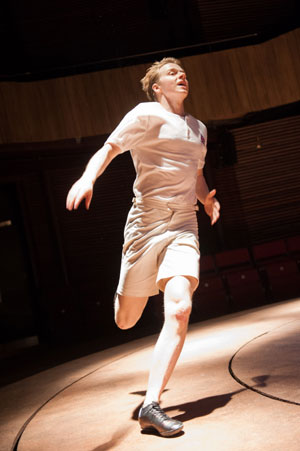 The whole thing is a pleasure to behold and seamless from start to finish, whether you’re being serenaded with Gilbert and Sullivan in Cambridge, blasted by bagpipes in the Highlands or deafened by the crowds come race time. It’s historically exciting, thrilling to watch and completely apt for the moment what with London 2012 about to erupt. During this Olympic frenzy, this show will make you stop and wonder just what the whole thing is really about: is it just winning and losing? Is it for personal glory or national honour, or something else entirely? What spurs the athletes on? How do they keep going? And just what is fair play (bearing in mind that even having a coach counted as playing dirty in 1924)?

Having failed to secure any tickets to London’s Games, I’d make do with these seats any day.

WIN A PAIR OF TOP PRICE TICKETS! We have a pair of tickets to give away to a lucky Arbuturian reader. Competition closes 31st July 2012. A winner will be selected at random and contacted via email shortly after the closing date.

Terms and Conditions: Prize is a pair of top price tickets to Chariots of Fire at the Gielgud Theatre, Shaftesbury Avenue, London, W1D 6AR. Tickets are valid for Monday – Thursday performances until 30th August 2012. The winner will be drawn at random. Prize is subject to availability, is non-transferable and has no cash alternative. Winners are advised to book a date as soon as possible.