Trending
You are at:Home»The Culturist»Theatre»Chasing Hares at the Young Vic
By Anna Selby on July 28, 2022 Theatre

Sonali Bhattacharyya’s Chasing Hares is, make no bones about it, a political play. It won Theatre Uncut’s Political Playwriting Prize last year and it wears its political colours with confidence. It works, though, on many other levels, and benefits from a fine cast who illuminate this story of life in Kolkata set some 20 years ago.

The play is book-ended by scenes in present-day London but the story focuses principally on the life of Prab (the excellent Irfan Shamji) and his family. A factory worker, he was a political activist as a student, is still a dreamer and, at heart, a poet who makes up bedtime stories for his baby girl. The factory, though, is shut and the financial pressure is telling on Prab and his wife, Kajol (a convincingly troubled Zainab Hasan). Then they go to see a folk-theatre jatra performance (“theatre for the people”) by the wannabe actor son of the factory owner, Dev (Scott Karim – a thoroughly modern devil) – and everything changes. 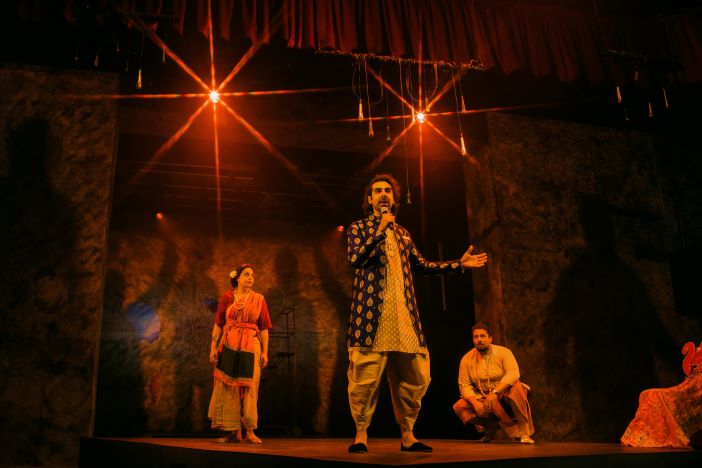 Prab finds himself catapulted into writing a new play for Dev and his leading lady Chellam (a quite dazzling Ayesha Dharker who lights up the stage whenever she’s on it). He also gets a duplex to live in (to be vacated when Dev wants to entertain his mistress there) and a promotion as the factory suddenly reopens – providing, of course, he tows the line when it comes to the boss’s working practices.

Chellam loves his new play with its strong heroine who leads the weak to freedom and a communal utopia that bears a strong resemblance to Bakunin-style collectivist anarchism (I did say it was political). This revolutionary fable doesn’t, though, go down so well with Dev the factory-owner’s son and, as the pressures in the workplace bear down on Prab, he finds himself forced to make a stark choice. 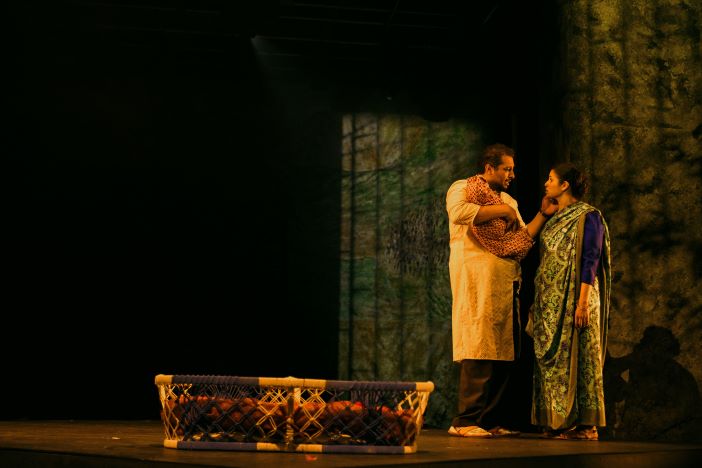 Moi Tran’s set has a revolving square at its heart used to great effect by the actors and the video designs of Jai Morjaria bring a shadow puppet-like commentary on the action while director Milli Bhatia moves the plot forward at a cracking pace.

The framing UK scenes where Prab’s now adult daughter, Amba (Saroja-Lily Ratnavel) draws parallels between child worker exploitation and today’s gig economy were a bit too obvious and clunky for me. But it would be ungenerous to focus on them rather than the strengths of Chasing Hares which, as a play about the power of story-telling, tells a very good story. By turns, it’s insightful, extremely funny, shocking and intelligent (and surprisingly foul-mouthed). Not subtle, then, but compelling and beautifully performed.