Trending
You are at:Home»The Culturist»Theatre»Hysteria at Hampstead Theatre
By Allana Isaacs on September 16, 2013 Theatre

The year is 1938, the rain lashes at the window and inside sits Sigmund Freud (wonderfully portrayed by Sir Antony Sher) in his study, a faithful replica of that just up the road in Maresfield Gardens. The silence is palpable and even before he utters his famous first line, you know you are in the hands of a master. It’s not long before the silence is broken and various visitors are vying for his attention and a spot on the famous long couch. Firstly there is Jessica (Lydia Wilson), a young student whose interest in Freud’s work and a single case study in particular has evident ulterior motives. Next Dr Yahuda (David Horovitch), a long term companion of Freud who is treating him through the latter stages of cancer. And lastly, there is Salvador Dali (Adrian Schiller), about whom there is little to say that cannot be said by the eccentric artist himself. All four actors give masterful performances of substance and soul, without which the play would descend into unadulterated chaos. The plot is well constructed with hints scattered at every turn so that when revelations come to light they are not beyond belief; it is well mapped but never predictable. 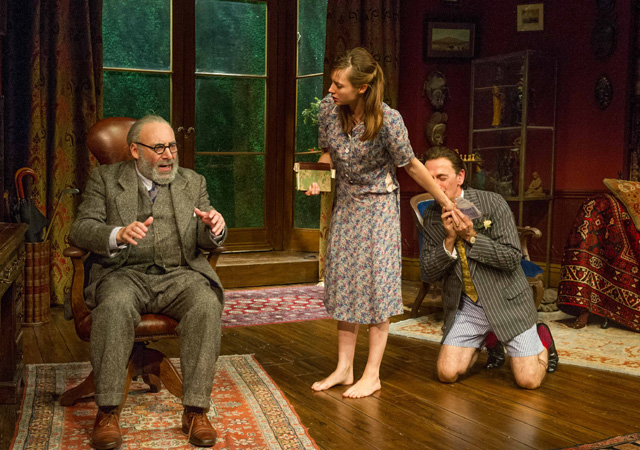 The play hurtles along with every component of farce used to perfection. Clothes are lost, doors are opened and closed at a steadily swifter pace, identities mistaken and answers given repeatedly to the wrong questions. This is true comic writing but so delicately balanced that there was never the fear of descending into slapstick. It is this light-hearted tone that is used to facilitate a dialogue about serious psychological analysis and Freud’s notions of hysteria and familial sexual abuse. It is a fascinating exploration of his work and his psyche and the often impossible internal conflicts he must have encountered in his career. The complex nature of his arguments coupled with the pace of the play led to a few moments of slight confusion but on the whole his work was made eminently understandable.

The second act takes a turn for the decidedly more bizarre. If the first act is Freud’s life and work set through the imagination of Dali, then the second act is a surrealist cacophony of imagery and ideology but tempered through the brain of Freud. As with surrealist art, viewers came to expect the unexpected and the way in which the second act played out was a complete surprise. To say the play lost the plot would perhaps take it too far, but the strength of director Terry Johnson’s writing which is so evident in the opening two hours is somewhat lost towards the end. 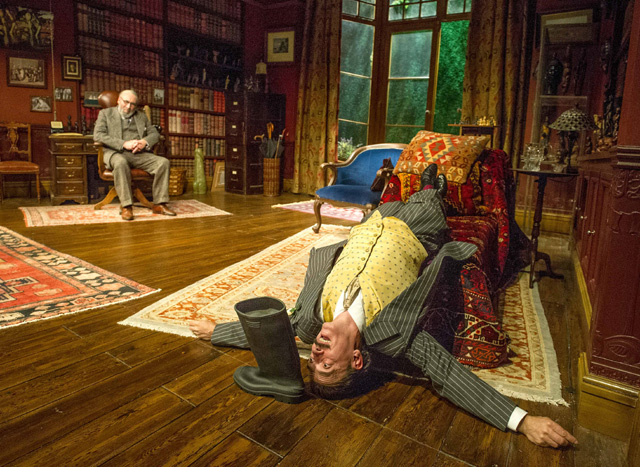 As is to be expected in plays that are as cerebral as this, the more one takes the time to reflect, the greater the sense of enjoyment, satisfaction and engagement one has. Having afforded myself the luxury of doing some research into the historical accuracy of this meeting, and of the influence that the two men had over each other (whether purported or admitted), what struck me most about the construction of the play was the way in which it served to engage with and provide a dialogue between the two seemingly disparate ideological standpoints. No doubt further in depth knowledge of both Freud and Dali would unlock more insights that are hidden within the fabric of the play, but the key motifs are abundant and well placed. Phallic imagery is the primary association with Freud, and on this count the play does not disappoint, with everything from a light pull and bike tyre to a penis sculpture being used prolifically. The chess board, a common reference to sexual activity, is also prominently positioned. Allusions to Dali’s paintings are also scattered throughout and come to a head in the second half. The concept that in his morphine induced state Freud might have been subconsciously influenced by the imagery that Dali had conjured through his free association of subconscious thoughts into his paintings was one that succinctly and successfully brought both artists together. 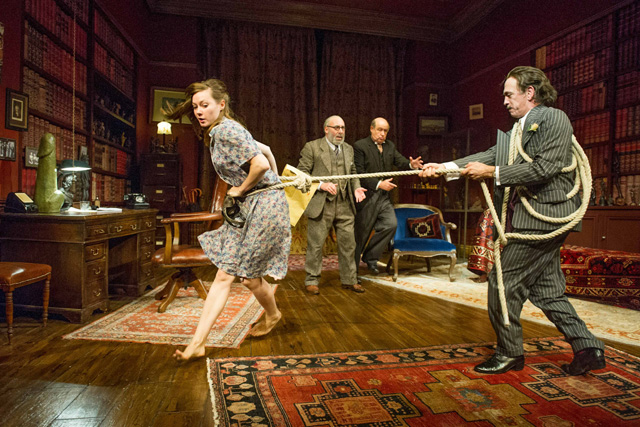 This is a production that at its simplest is an enjoyable and thought provoking piece of theatre but at its core holds an in depth examination of the human condition that both Dali and Freud dedicated their lives to exploring, and we should take just a few hours to absorb.

Hysteria runs at Hampstead Theatre until 12th October 2013. For more information and tickets, visit the website.