Trending
You are at:Home»The Culturist»Theatre»Posh
By Rebecca Lipkin on September 24, 2019 Theatre

Opening to frantic sounds of Vivaldi’s Four Seasons, Laura Wade’s biting British satire Posh is inspired by the infamous goings-on of Oxford University’s exclusive Bullingdon Club, of which both the undergraduate David Cameron and Boris Johnson were former members, much to their shame we hope. Here re-named the Riot Club and chronicling one club dinner, expect wine guzzling and grown-schoolboy antics that, if it won’t have most Etonians cringing, it will the rest of us. This well timed revival produced by Joe Prentice, almost a decade on from the play’s Royal Court London premiere during the 2010 general election, the current mood of the audience is akin to 18th century spectators witnessing a hanging. Currently at Theatre Royal Bath during a UK tour, Tyger Drew-Honey (of Outnumbered fame) makes his debut stage appearance leading the cast of fourteen as the ultimately conflicted Alistair Ryle.

Atmospherically designed by Will Coombs, with aristocratic portraits suspended above the stage (including one of American author Henry James strangely enough), most of the action takes place in the pseudo-posh ‘kidney’ red ‘private dining room’ of the gastro pub the club have selected; the ten members formally attired in tails proving an odd sight indeed. Coupled with this, they each hang a black plastic bag on their chair – an ominous prop later revealed to come in useful for alcohol-poisoning-induced vomiting. The Riot Club’s rules require each of the party to remain in the room for the duration of the repast, thus necessitating that members urinate in plant pots or whatever vessel comes to hand. Posh succeeds in being thoroughly odious and rather shocking. 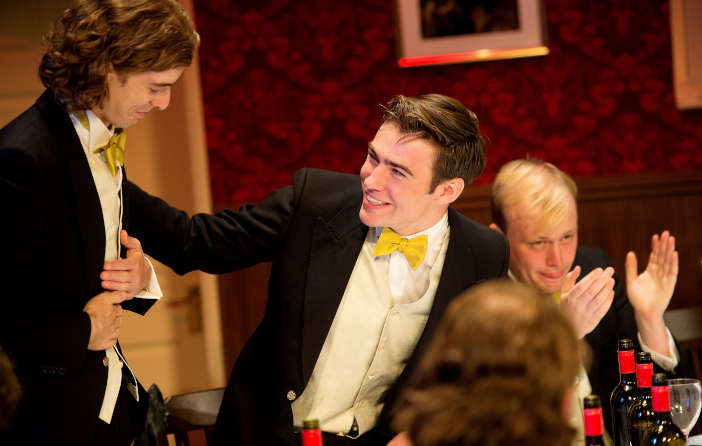 After the mishaps of the Riot Club’s last dinner, the president has promised not to bring the historic reputation of the club into further disrepute, but we all know this isn’t going to be any old vicar’s tea party. Naive and eager to impress, Guy Bellingfield (Adam Mirsky) feels the importance of living up to the stories his uncle Jeremy (Simon Rhodes) has told him of when he was in the club, and simply choosing the right kind of wine doesn’t seem to go far enough. Guy has also been charged with selecting the menu and is thrilled by the idea of a ten bird roast, a main course not only suitably aristocratic but symbolic of each member of the club and their do-or-die unity. The relationships forged at The Riot Club are for life not just for Christmas and the roast birds within a bird, albeit only nine out of ten due to the butcher letting the landlord down, is suitably festive. The portly, blonde Joseph Tyler Todd naturally puts us in mind of a certain incumbent PM (correct at time of going to press), while Jamie Littlewood is memorable as the brattish Greek nouveau-riche Dimitri, bullied because he can only boast of his family having a yacht rather than a crumbling ancestral estate managed by the National Trust. Toby (Matthew Entwistle), forced to wear a wig, is meanwhile tortured into downing drinks on having broken club rules by discussing the Riot Club outside its walls with a mere member of the public.

Directed by Lucy Hughes, Posh is a grotesque portrait of over-indulged, spoilt, priggish upper class men who will likely be the British political leaders of tomorrow (despite the fact that they despise pretty much everyone not educated at Eton and Oxford). It’s fair to say that the Riot Club doesn’t boast a single likeable character with whom to empathise when the dinner takes a violent turn in the second act. The club’s agenda appears to be all about breaking the rules, from smoking cigarettes when forbidden by the landlord not to, hiring a prostitute to give each of them a blow job under the table, to trashing every hostelry they frequent – is there nothing these entitled young men money can’t buy, or anyone money can’t buy off? The only appealing roles are the landlord, Chris (Peter Mcneil O’Connor) and his waitress daughter, Rachel (Isobel Laidler) who proves a predictable target when the prostitute, Charlie (Ellie Nunn) has exited via the window with a flee in her ear. 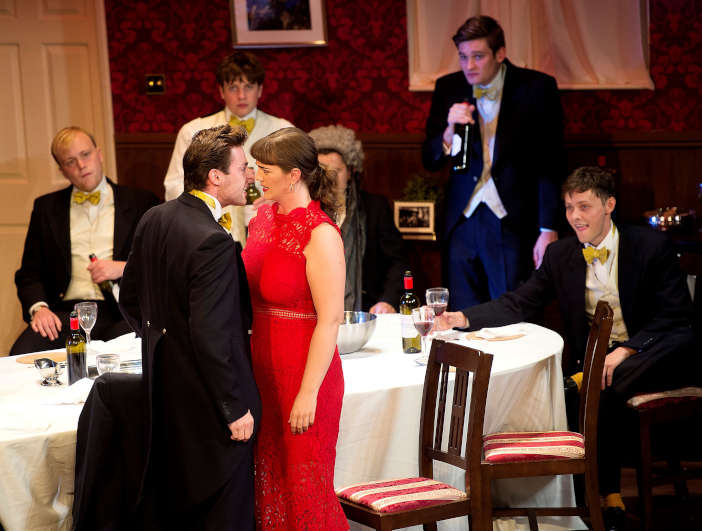 Written and directed by the opposite sex, this production doesn’t pull any punches when it comes to reviling the exploits of posh boys who, born with silver spoons in their mouths, stuff their cherub faces with Eton mess whilst sexually harrassing Rachel the waitress. This is one bowl of cream that’s inevitably going to turn sour.

Wade’s dialogue ripples with eyebrow raising bad language and public school jargon (you’ll even find a glossary in the accompanying programme), while the drama, most of which centres around the lengthy, booze-fuelled dinner itself, offers an uncomfortably amusing through-the-keyhole glimpse into the preposterous traditions and rituals upheld by the most elitest of the British elite. To the sacred ten appointed, being a member of the Riot Club is everything – or is it? Deliciously vile and debauched, audaciously outspoken and cauliflower-nose-ugly, this unique slice of British theatre may just have you turning to socialism or emigrating altogether.

Posh at the Theatre Royal Bath until Saturday 28th September 2019. For more information and tickets please visit the website.