Trending
You are at:Home»The Culturist»Theatre»The American Clock
By Anna Selby on February 18, 2019 Theatre

You can see the reasoning behind the resurrection of Arthur Miller’s 1980 play, The American Clock, as a morality tale for our times. It’s a semi-autobiographical story – the tale of the Great Depression and its effect on the Baum family who, like the Millers, lose everything in the Wall Street Crash. A tale of a society dancing its way towards a desperate financial crisis, believing that nothing can ever go wrong, that the clock will never strike midnight.

Our own 21st century crash, though, looks mild set against the dance marathons (referencing They Shoot Horses, Don’t They) and desperate dust bowl farmers (ditto Grapes of Wrath) who stream across the stage in a series of vignettes as the years (flagged up by actors with placards) roll by. Miller described the play as “vaudeville” and it is, for the most part, a series of sketches held together by the marvellous Clarke Peters who acts as the narrator, Arthur Robertson, the one man who saw it all coming and sold his stocks in time. 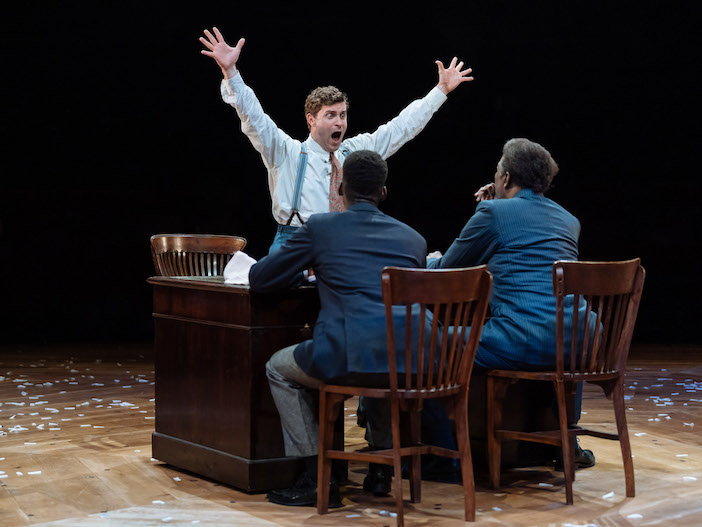 Director Rachel Chavkin has thrown all her inventiveness at this production. She plays it in the round with some of the audience sitting on the stage behind the action, a revolve at its centre. She takes Miller at his word, too, and sets everything to music – Justin Ellington’s great score with lots of familiar Thirties songs played by the on-stage musicians is one of the key successes of the evening. And there’s dance, as well, most notably Ewan Wardrop who tap dances away from his presidency of General Electric. The cast streams on and off the stage, pushing furniture, unrolling carpets, riding bicycles. Scenes switch from boardrooms to welfare queues, staggering marathon dancers to rabble-rousing communists.

There isn’t, though, a central driving plot. Chavkin triples the Baum family – there are three sets of each Moe (father), Rose (mother) and Lee (son), played in turn as a Jewish, Asian and black family. There are moments of real poignancy and family anguish but it would be hard for the audience to empathise with the characters even if it was just one set of actors, impossible with three – we never really get to know them. 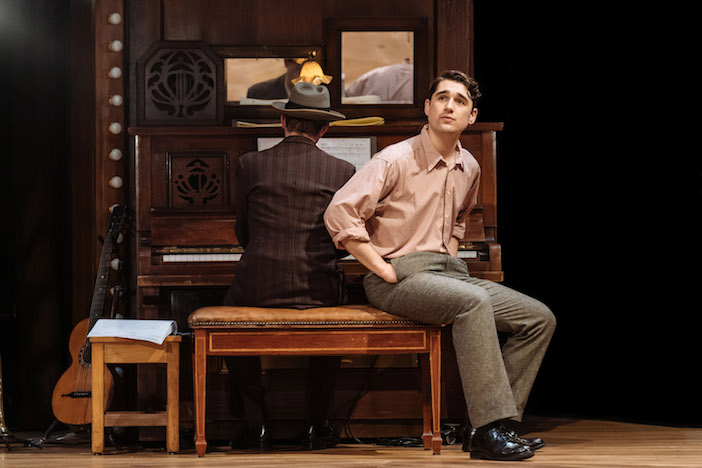 This is, of course, a flaw in the play rather than the production. And Chavkin has delivered some brilliant moments, an entire era encapsulated in snapshots – sometimes sad, sometimes shocking, sometimes funny. These sustain you through the first half but the second drags without the safe hands of Clarke Peters’ narration to keep the audience on track and with the years flying by faster and faster. There are some fine performances, especially from Golda Rosheuvel, Clare Burt and Francesca Mills but as the evening goes on, the play becomes ever more splintered until it feels less like theatre and more like polemic.

This is not Miller at his intense emotional and political best – though that’s coming next at the Old Vic in his classic, All My Sons. It will be interesting to compare the two.

The American Clock at the Old Vic theatre until 30th March 2019. For performance dates, bookings and more information, call the box office on +44 (0)8448717628, or visit www.oldvictheatre.com.