Trending
You are at:Home»The Culturist»Theatre»The Master and Margarita
By Will Hunt on March 28, 2012 Theatre

Firstly, a confession. Until attending Complicite’s dazzling adaptation at the Barbican, Mikhail Bulgakov’s The Master and Margarita represented something of a literary blind spot for me. Here was a hugely significant, influential and daring work of 20th century fiction that, for one reason or another, completely passed me by. I take a little comfort in the fact that the novel has had what can only be described as a checkered past, involving burnt manuscripts, Soviet censorship and a writer beset by misfortune. Suffice it to say that knowing very little about the source material proves both a blessing and a curse. 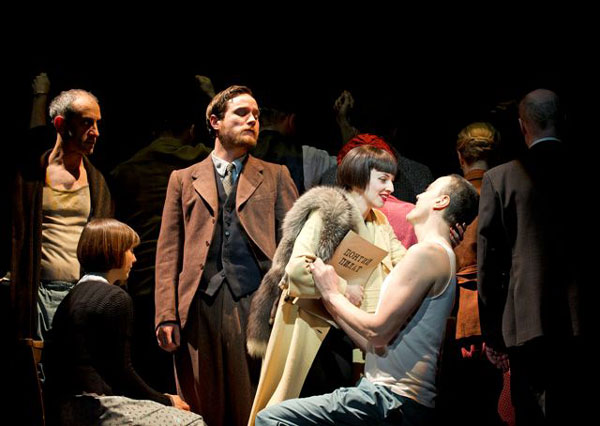 The labyrinthine Barbican Centre is certainly a fitting location in which to premiere Simon McBurney and Edward Kemp’s new adaptation, since negotiating its brutalist courtyards and hallways in order to find the auditorium prepares the theatre-goer for the maze-like nature of Bulgakov’s tale. Without a good knowledge of the text to light my way, I confess to being baffled at times by the fantastic leaps the action makes, both temporally and stylistically. However, more often than not, McBurney and his ensemble manage these leaps with such flair and ingenuity that I could still cling on to a sense of narrative and experience the child-like pleasure of something entirely new to me.

The play concerns a visit made by the Devil and his hellish harem to 1930s Stalinist Moscow and the havoc they wreak amongst the lives of the city’s literati. The ‘Master’ of the title is a novelist whose re-telling of the story of Christ’s encounter with Pontius Pilate is re-visited time and again throughout the evening, framing much of the narrative.

There is a frantic energy to the proceedings with McBurney’s dizzying use of projected visuals and an ever-shifting soundscape, lurching from classical tableau to Soho stand-up, ensuring that the action is forever poised to descend into a nightmare from which the city’s inhabitants will never escape. 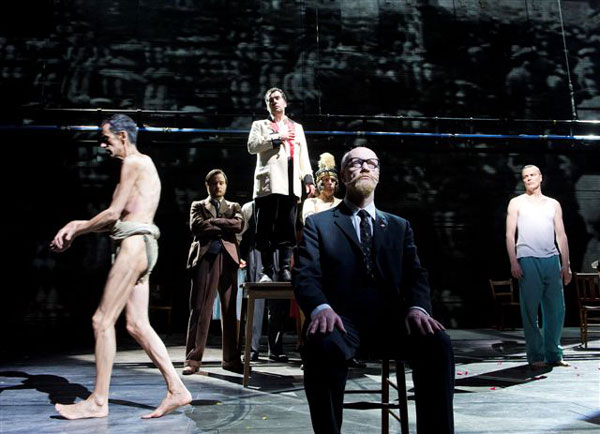 Much of the story can be seen as parable and nods to its present day parallels are neatly done with the onstage cameras being turned on the audience at one stage. Other references are handled skilfully including a sly acknowledgement of Mick Jagger’s reported fascination with the book and the devilish Professor Woland, signalled, not by the tearing riff of Sympathy for the Devil, but the haunting choral opening of Gimme Shelter.

Paul Rhys delivers a performance of quiet intensity amidst the sea of noise and fury raging around him. As the Master his every move and gesture is racked with the paranoia and self-doubt inflicted upon him by the state, a disposition echoed by Tim McMullan’s Pontius Pilate. McMullan’s performance is one that stays with you long after the final scene has ended, his gloriously rich and rounded voice becoming more pained and hollow as the action progresses. By the time we reach Christ’s execution, McMullan resembles a shell of a man, unable even to fill his luxurious red and white uniform in which he previously swelled with pride and power.

Sinead Matthews’ portrayal of the Master’s loyal Margarita jars somewhat with the comparatively naturalistic nature of the first half, but her bold, earnest delivery drives the play forward at a furious pace as her character begins to dominate the narrative. The scenes of her flying through the Moscow night to attend a ball for The Damned on the arm of Professor Woland left me breathless, and it is a testament to McBurney’s skill as a director that, within this pandemonium, moments of genuine pathos, such as Maragrita’s encounter with a woman tormented by Woland for her role in the death of her own child, still shine through. 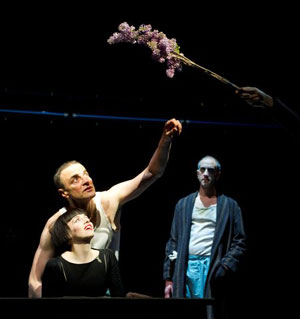 In the end it is almost too much to take in over the course of a single evening and inevitably, with something of this scale and ambition, some elements fall flat. A man-sized, foul-mouthed black cat is always going to be a challenge for any director, and unfortunately I quickly began to dread seeing the bright red eyes of Behemoth, the Devil’s familiar, approaching the stage. The tone and delivery of the puppet-Behemoth succeeds in puncturing whatever atmosphere has been built up in the minutes preceding his entrance (one scene, where the animal spoke of his desire to ‘shag the audience’, was particularly toe-curling).

Certainly some of the more bravura moments will divide audiences; a scene towards the end, which sees the titular couple riding through the sky on a horse constructed of chairs, I found breathtaking, but others I have spoken to felt it to be unbearably saccharine. However, there can be no denying this is a phenomenal achievement, a wild and thought-provoking piece of theatre. Secure a ticket by whatever means necessary whilst it’s in London or on tour, just tell the authorities that the Devil made you do it.