Trending
You are at:Home»The Culturist»Theatre»The Play That Goes Wrong
By Rachel Fellows on September 23, 2014 Theatre

The art of doing things badly is a fiendishly difficult one. If you want to do it well, that is. Good ‘bad theatre’ is just what The Play That Goes Wrong is striving for, and I don’t think the Mischief Theatre company would have made it from the Edinburgh Fringe to the West End if this had been bad ‘bad theatre’; the howling and cackling that filled the auditorium was something else. With shrewd writing, subtly unsubtle acting and a healthy dollop of silliness, The Play That Goes Wrong is wickedly funny.

Following in similar footsteps to the likes of Noises Off, The Play That Goes Wrong depicts an am-dram troupe’s doomed attempts to stage a 1920s murder mystery. The trouble is that the director has illusions of grandeur, the props are all in the wrong place, the set gradually falls apart and the leading lady can’t act for toffee. The accompanying thespianism on display doesn’t exactly dazzle, either.

Directed by Mark Bell and written by three of the actors – Henry Sheilds, Jonathan Sayer and Henry Lewis – the beauty of The Play That Goes Wrong is that it is so gleefully brazen about its stunts that the audience is able to partake of the general absurdity with no qualms whatsoever; you are never in doubt as to whether it is appropriate to laugh. 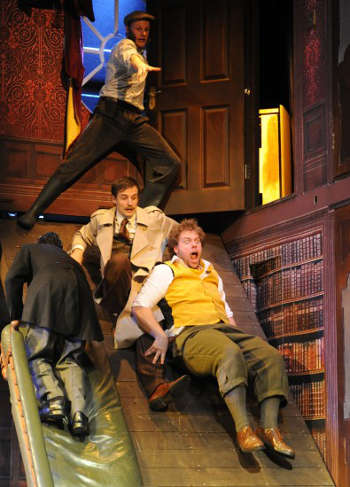 Sheilds’ turn as the fictional play’s director and inspector has the suppressed anger of Basil Fawlty in a Macintosh, desperately trying to wheedle some plausibility out of his actors, who include a Manuel-esque little figure in the form of fellow writer, Sayer, as the butler Perkins. With white paint slopped on his head for an instant ageing effect, Perkins takes his prompts from the notes written on his palms and seems to struggle with the nuances of the script: “I’ll be in my quarters exit!” he announces with triumph, before leaving the stage. The final writer, Lewis, has something of the young Brian Blessed about him, bellowing out his lines in a deep bass and quite literally holding things together in the face of disaster (mainly the set).

Some of the best moments come from the adorable Dave Hearn, gawping like a star-struck schoolboy whenever he garners appreciation from the audience, and Charlie Russell as the gloriously useless femme fatal, whose fits of stress-induced hysteria are predominantly characterised by gyrating hips and jazz hands. The home-made sound effects during a fencing dual are also rather enjoyable.

Antics escalate steadily at first and then at break-neck speed, intensifying from a bit of spitting caused by white spirit being poured into whisky glasses, to the girls getting knocked out by enthusiastically opened doors, and then to entire walls of the set collapsing. On occasion, it stretches even the more generous of humour, which may be down to the fact that this production has been extended into a full-length play from a one-act comedy up in Scotland, but it is never enough to knock the life out of the thing in general.

A good bad play has to reach that level of being so catastrophically terrible that it flips into being enjoyable and, dare I say, clever – it can’t flounder somewhere in the middle. So it is a marked relief that The Play That Goes Wrong does so in such spectacular fashion. Mark Bell’s meticulous direction is a feat in itself, as this must have been a banging headache to choreograph, and praise must go to the actors too, for executing it with so little concern for their own safety. If this show doesn’t put you in a good mood, nothing will.

The Play That Goes Wrong at the Duchess Theatre, booking until February 2015. For more information and tickets, visit the website.