Trending
You are at:Home»The Culturist»Theatre»The Starry Messenger
By Allana Isaacs on June 3, 2019 Theatre

Matthew Broderick makes his West End debut in a role written specifically for him by writer Kenneth Lonergan (of recent Manchester by the Sea accolades) following a lengthy friendship originated at the Hayden Planetarium, the very setting of the play. He plays Mark Williams, a fictional imagining of the astronomy teacher whose life and story piqued Lonergan and Broderick’s boyhood interest when they attended lectures many years ago.

Broderick’s Mark is, in no simple terms, drifting through life towards an imminently approaching mid-life crisis. A failed astronomer, he teaches an introductory lecture at the Planetarium to a group of adults with varying levels of ability and interest. His marriage to Anne (a sorely underused Elizabeth McGovern) is strained at best, his disillusionment at his teenage son’s lack of achievements is palpable, and when Angela (Rosalind Eazer) walks in to his lecture theatre, it takes little time for the inevitable affair to happen. 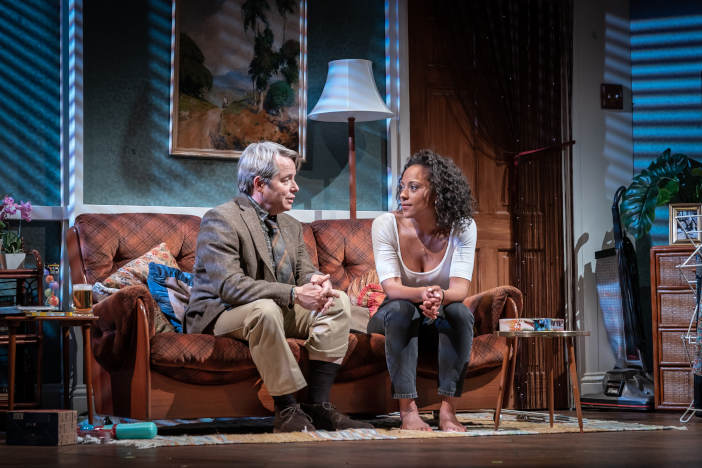 There is a sense of detachment throughout, leading the audience to feel only distantly connected with the characters, and the characters themselves to have merely surface relationships with each other. The deadpan tone did, in places, lead to each character feeling like a caricature of a certain trait; Mark the placid yet jaded academic, Anne the distant wife, Angela the guilt ridden lover. And yet, to say this doesn’t take away from some fine characterisation, occasional witty dialogue, and some more nuanced scenes. One memorably entertaining interchange is delivered by one of Mark’s students who gives detailed feedback on his teaching. Laughs abound, and Broderick’s comic timing is demonstrated in spades, however it does feel at odds with the strained exploration of the human condition that surrounds it.

While the relationship between Angela and Mark is never fully believable, Lonergan’s intention to set their contrasting views of the world against each other is clear. While Mark solely sees the planets for their rational scientific value, Angela is more emotional, religious, and especially in the second half, looks for more validation in the concept of the after life and heaven. Lonergan touches on series of relatively lofty themes: the midlife crisis, the difficulties of parent-child relationships, the mysteries of the universe, isolation, loneliness, the frailty of the human condition. And yet, each of these seemingly exist as a narrative thread, never fully resolved or entwined together. 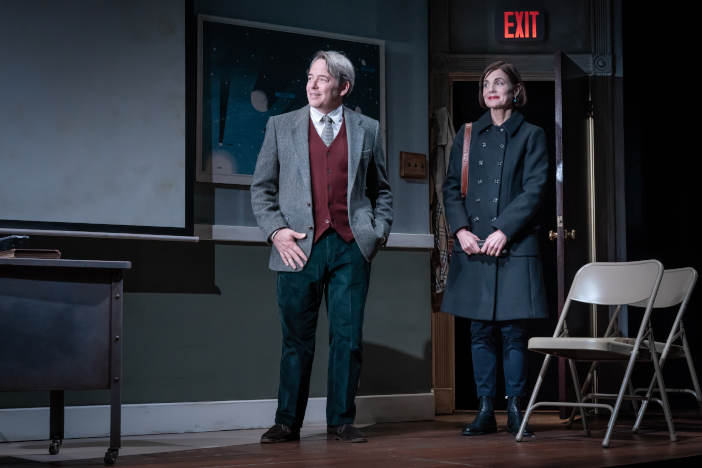 The Starry Messenger poses the big questions – Who are we? Why do we exist? How big is the universe? Does God exist? What does it all really mean? – but is found somewhat wanting. And perhaps that’s the point. The revolving stage and cosmic projections do well to imbue the evening with a sense of occasion, contemplation and resonance, however the poignant, existential drama that is crying out to be at the heart of the play disperses into the night like the very stars without ever really being grasped by the audience.