I remember it vividly. The sheer sense of wonder that gleaming, jewel-coloured baubles, spinning on their branches, throwing colour onto the insipid world around them, cast over me as a child. In that moment; wide-eyed, marvelling at the kaleidoscope of colours around me, everything felt magical and anything seemed possible – even a remarkably rotund chap and nine reindeers sliding into our inglenook. Decades on, and whilst my heart still quickens at the first sight of snow, I can’t quite reach that sense of pure, all-consuming awe that came so easily as a child.

Eager to rekindle this Christmas spirit, I got to work planning the ultimate festive staycation for my daughter and I. Our Christmas story needed to be set in a city where the lights were brighter, the spruces bigger, the carols louder: London. Circling events faster than a brat in an Argos catalogue, I soon had a relentless itinerary aimed at shamelessly exposing the unexpecting poppet to everything from iconic ice rinks and feasting to festive shows. Having plotted our weekend’s plans on a London map, it looked like a toddler had annihilated it with a crayon. First up: ice skating at Somerset House. 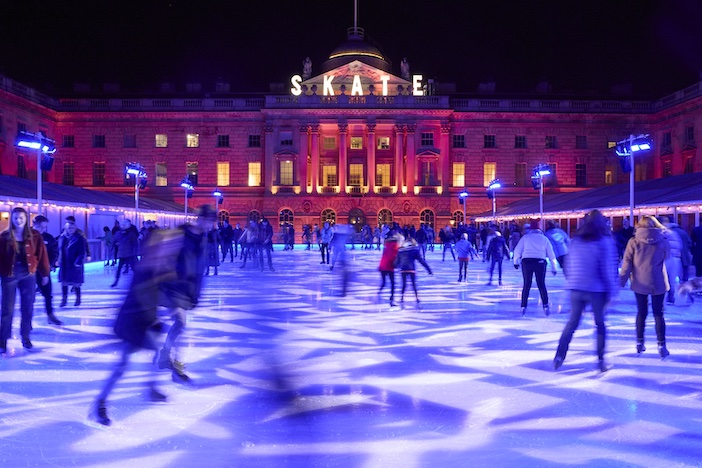 As we entered the magnificent Neoclassical courtyard, treading its ancient cobbles and taking in the gleaming rink, Rosie couldn’t contain her excitement. I, on the other hand, was only fully onboard when I clocked the sponsors: Moët & Chandon. Well, a bit of Dutch (or French) courage never harms when one is faced with public humiliation and the odd broken bone. Now, I’m unsure if it was this delicious elixir or my clearly misplaced self-confidence, which made me think gliding around the rink with a six-year-old would-be plain sailing. Two jelly-legged steps onto the glacial rink and any vision I had of us looking like those jolly skating folk you see plastered across nostalgic Christmas cards rapidly unravelled.

It’s fair to say, we looked more like a mother and child thrown from Titanic, desperately clinging to one another whilst treading ice and whistling for a life raft (or, in our case, a toddler skate aid… imagine a red plastic Zimmer frame on ice). Angus, the wheelchair-bound man that we had befriended in the queue, flew past us at speed, stifling a giggle and asking if we needed a tow. Having eventually beckoned a life raft (sorry, skate aid), we soon found our rhythm…that of a new-born calf meeting its limbs for the first time. As our speed ranked up a notch, we decided to end on a high and quickly retreated to the champagne lounge, to toast still being in one piece and to shamelessly laugh at the next set of parents, as they too plunged into a Titanic-worthy panic. 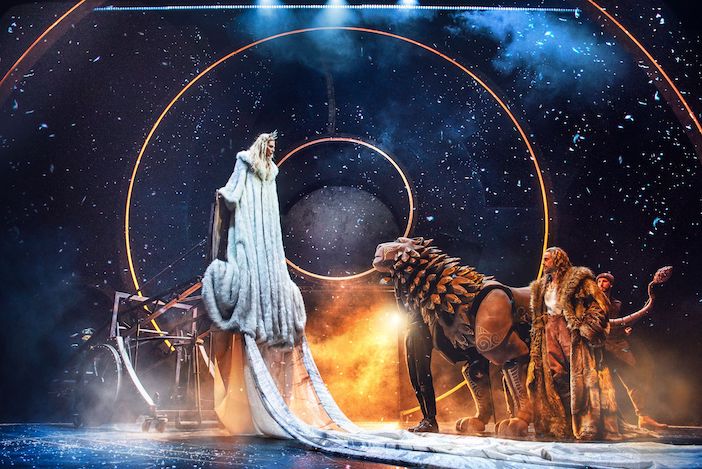 With a new spring in our step, we trotted towards the adorably intimate Gillian Lynne Theatre (well, name me another theatre that lets you take in your own flat white,) to see The Lion, The Witch and The Wardrobe; the epitome of Christmases past. Rosie was still critiquing my amateur corner handling when a lone soldier wandered onto the stage and began playing the piano, causing the audience, and my seriously cocky daughter, to hush (I’ve never been so pleased to see a sultry man with a gun.) The small matter of a global pandemic had seriously hampered our theatre-going over recent years, which made this fantastical production of the Christmas classic all the more consuming. With each new scene, a new spectacle to gawp at; falling snow, a soaring Ice Queen, flying children and a magnificent Aslan. 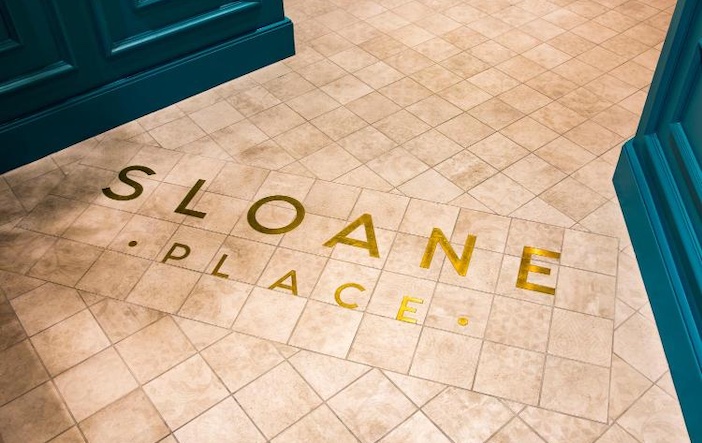 Bidding farewell to the bewitching fantasia, we hailed a cab to Sloane Place. This new boutique hotel, just a stone’s throw from the razzmatazz of Sloane Square, offered the ideal retreat from the madness that is London at Christmas. Despite being just a year old, this bouji bolthole is the little sister of the well-established private members haunt, The Sloane Club.

The chic guest rooms, smart restaurant and speakeasy-style basement bar are just as slick, but with a laidback, youthful edge which puts you at ease. Having launched in 1922, the original private members club was created for women, and women alone, banning men from crossing the threshold until the 1970s – a nice touch for our girly weekend away. 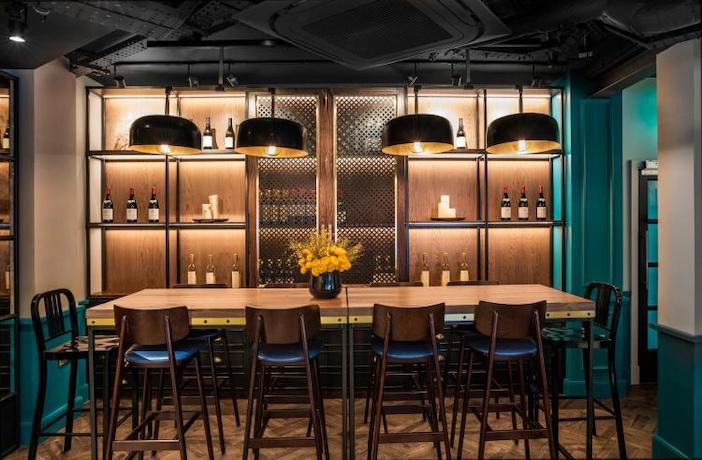 Having enjoyed a decadent soak in the magnificently bubbly bath, thanks to Rosie’s overzealous decanting of the hotel’s Molton Brown goodies, we went off in search of sustenance. Having politely declined the offer to dine privately on the fairy-lit roof terrace, we grabbed a window seat at the hotel’s buzzy restaurant, knowing we were in safe hands, with Ex-Savoy chef Bernhard Mayer at the helm.

A jovial evening of fine food ensued, watching fur-clad Sloanes wrestle with their day’s designer hauls whilst we devoured our steaming bao buns. Tucking in to a perfectly cooked filet steak and a moreish chilli-garlic broccoli side, we recalled our day of high jinks; champagne before noon, on point pirouettes and a trip to Narnia, no less. 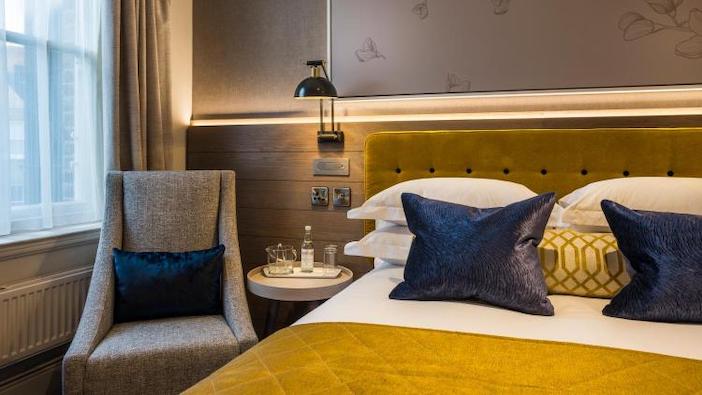 The next morning, having been lured into an otherworldly slumber, confabulating with conflicted fawns and plotting with mythical beasts, we were relieved to find ourselves back in the comfort of Sloane Place Restaurant, feasting on berry bowls, fluffy pastries and crispy bacon, without a Turkish delight in sight. Today, we were off to meet a legend of a different kind…. Santa Claus… or so we thought.

Having waited fifty minutes in the rain, with a bedraggled elf constantly assuring us he would “just be a few more minutes,” and plummy accented parents enquiring if there was a “national elf service strike,” or “traffic on the Arctic circular,” it was declared that we had in fact been stood up by the big man. 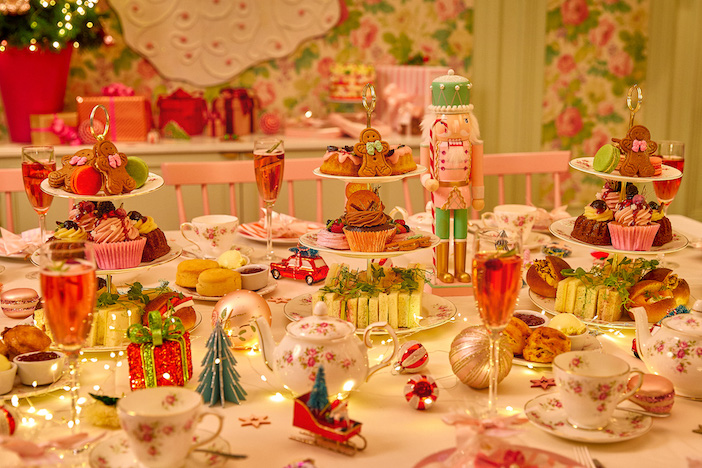 Raising a six-year-old’s spirits when Santa has left them high and dry (or, in this case, low and somewhat sodden,) is no mean feat, but garnished in powder pink flora and festooned in glittering fairy lights, Peggy Porschen’s cake emporium was the obvious choice. Their elaborate Merry & Bright festive afternoon tea, to be precise. A neat layer of festive finger sandwiches soon arrived, topped with beautifully decorated cakes and sweet treats, from the frost-topped winter berry cupcake to the playful gingerbread man sandwich, all crowned with steaming scones, awaiting their knife-bendingly thick clotted cream and ruby red jam. Peace on earth had been restored, as had Rosie’s dampened spirits.

Back out in the rain, we mooched out way back towards Sloane Square, and the tube that would whisk us away from the garlanded streets and packed theatres, and back to reality. Desperate to savour every minute of London’s Christmas splendour, we allowed ourselves one last unplanned adventure, to Saatchi’s jewel-encrusted Bulgari exhibition: Serpenti Metamorphosis by Refik Anadol. Well, we would only be a moment, after all, serpent watches aren’t high on a six-year-old’s bucket list, are they? Having nodded politely at the ream of diamond scales, ruby tongues and emerald eyes, we stumbled on a mysterious door. 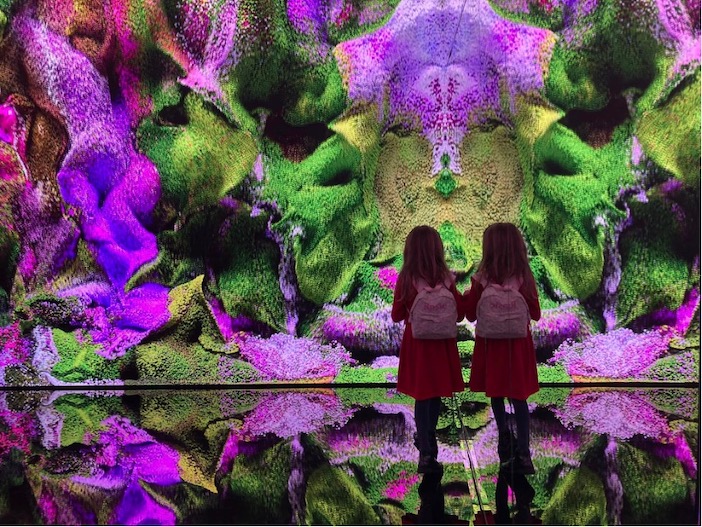 Expecting another room of slithery jewels, we paused before entering, but with the alternative being reality, we ventured in. We found ourselves tumbling into a fantastical world, where mirrors and AI conspired to surround us in glorious technicolour, which ebbed and flowed, rose and fell and danced all around us. Searching around me for anything to make sense of my surrounds, I saw Rosie… filled with wonder, staring wide-eyed, marvelling at the kaleidoscope of colours around us. And, in that moment, everything felt magical and anything seemed possible.

Nightly rates at Sloane Place start from £200 on a B&B basis, for more information or to book, visit www.sloaneplace.com.