Trending
You are at:Home»The Lifestyle»Jemma Kidd Make-Up School
By Madeleine Spencer on April 19, 2012 The Lifestyle

I’m never keen to admit I’ve missed a trick on the cosmetic front, but I am going to have to own up to the fact that prior to attending the press evening at Jemma Kidd’s Make Up School I knew very little about the goings on in this inconspicuous studio off Ladbroke Grove. I also wasn’t really acquainted with her make-up line – I had her Crushed Jewel Glitter Eyeliner, and loved it, but never put more thought into her wares. 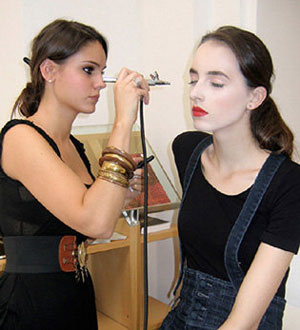 I was very game for learning more, so I went along with my sister to her Make Up School.

Upon first arriving it was all a little stressful – within the first ten minutes we met Jemma (glowing skin, long limbs – she ticked all the model boxes) and were told we had to remove our make-up. My sister and I responded in the manner of junkies being forced into rehab – a halfhearted attempt at removal, followed by surreptitious and feverish use of products stashed in our bags, followed by a huge sigh of relief when we weren’t told off. In our defence, it was an extreme situation – it wasn’t only Jemma sporting model looks, but her whole team. In retrospect, I should have seen that this boded well, that the school is a detox of sorts for those harbouring bad habits, but at the time I was only intimidated.

After a little chat from Jemma (more of which later), her friend and fellow make-up artist Korben Niblett took to the stage and, thankfully, let us all reapply our make up using Kidd’s range, coupled with his tips.

Korben was the cool kid at the Kidd Make Up School. I suspect he was cool at his real school, too. He managed to be didactic in a very appealing way, starting with the basics and working his way from there, as any good teacher ought. He highlighted different brush types for different purposes (Kidd’s are excellent, and a snip of the price of other brands so I firmly suggest you stock up), colour correction theory (primary colours blue, red and yellow can be mixed or used separately to highlight or mask an area with brilliant results), and how the masterclasses at home work.

This was quite surprising to me – it is very affordable to have one of the team come to yours to teach a very wide variety of make-up styles and tricks (around £20 a head). He made the point that many women learn how to make themselves up from their mothers, and then just continue using the same tired kit and old techniques throughout their lives. 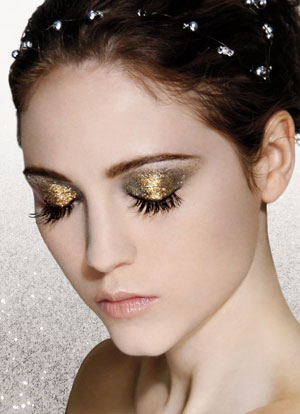 This re-education is part of the Kidd mission, as well as initial education to help youngsters starting with make-up to learn how to get it right for them. This is the purpose of the JK line, to cater for teens. Lucky teens, it is all good stuff.

Jemma gave a second chat and showed a video in order to illustrate the import of her latest venture, the result of a brainstorm with her friend David de Rothschild, upon which she embarked as she felt the business had grown enough for her to want to ‘give something back’. They thought up the rather clever VISIONfund, in which an Ethopian’s eyesight is saved by the purchase of an eyeliner. An eye for an eye. It really is a winning concept, especially as Jemma pointed out that Trachoma, which can cause loss of sight, is entirely preventable and treatable with antibiotics. Thank God I had my make up back on by then, her philanthropic streak may otherwise have left me entirely useless in note-taking – I am nothing if not overwhelmed by shows of such divinity on earth (Helena Christensen’s kind ‘hello’ once rendered me speechless. Genuinely. I didn’t even say hello back, so exceptional was she in the flesh).

I took my notes, and here are the salacious bits: this tall trickster has plenty more up her sleeve, amongst which are the launch of a perfume (eponymous – she told us that most other names tend to already be taken) and a second book entitled Jemma’s Secrets (divulging real trade secrets from Jemma and her friends in the industry).

By the end of the evening I was made up (phew), and had made up my mind – I really liked Jemma Kidd. When she told me that she wouldn’t consider changing the westerly location of the studio, I liked her a whole lot more. When I tried the goodie bag’s bounty, it was love.

For more information about Jemma Kidd and her make-up school, visit the website.