I sat in the cinema auditorium. I was hot from my cycle and damp from that particular type of sweat which comes unexpectedly when there is a shift in temperature from cold to mild. I was tacky and uncomfortable and a new, pungent nervous perspiration had broken out at the prospect of missing the beginning of the film. I was also hungry, having had little to eat in my rather hurried lunch, but having built up a sizeable appetite through my usual swim and seventeen or eighteen miles on the bike. But most significant of all was that I was parched. I had lost my water bottle a week or two before and had not had time to scrounge a glass of tap water from the bar beforehand. The film was Spartacus; it ran for three hours and twenty minutes so there was no chance of satisfying my thirst until after ten. 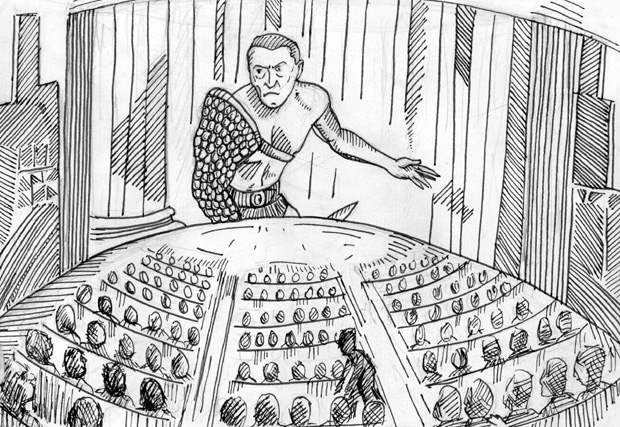 The film began. It opened in a desert setting with slaves breaking rocks in the hot sun. I involuntarily ran my tongue over a mouth which felt gravelly and dry and wondered whether I’d be able to concentrate in these circumstances. I did not have what I most wanted – a drink. I feared the lack would create a destructive mantra in my mind as the images rolled across the screen and I would leap mentally to the end and the comforting prospect of a cold glass of water. The film would be ruined. But oddly enough, the slaves, then the gladiators, came to my rescue. If these men could undergo the deprivations and grim hostility of their lives, surely I could tolerate going without food and drink for a few hours. Almost immediately my mind subdued my need, I settled back and started enjoying the film.

I don’t know when the rustling started, but as soon as it was registered on my consciousness, I was jolted out of the first century BC and dropped back into a twenty-first century cinema. I cast around and my eyes soon zoomed in on their target. A couple in the middle towards the back, feeding from a cellophane bag full of chocolates. They seemed to be smiling in the bounced light of the screen, sitting low and canoodling, and this bubble of shameless pleasure, when they had so meanly ripped mine away, made me scream internally with rage.

I waited, decided to allow them some space. Perhaps they were merely dipping into the bag to momentarily divert their taste buds? No. The rhythmic swing and lazy drop of the hand like a couple of oil derricks spoke of a dull and undefined lust that would not be sated until the last drop of cocoa had been consumed. 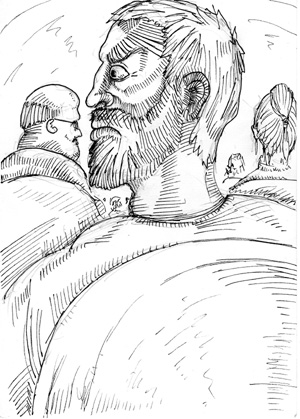 The film wound on but I was not watching. I was staring bitterly into the gloom at this hateful couple who were so blithely ruining my evening. Was no one else being disturbed? Could not the people on either side lean in and remonstrate? The British Film Institute was unusual amongst cinemas in that it forbade eating within the auditorium. In fact it forbade everything but the drinking of still water. This was a temple to film, not a fast food joint. It fed cineastes, not gluttons. This gross indelicacy was akin to the Speaker farting during the Queen’s speech. It just wasn’t done.

I looked round at the usher, collapsed impotently like a broken scarecrow at the back. Surely he should be patrolling the stalls for just such a breach of etiquette? I leapt out of my seat and fled towards him.
“There are some people eating over there!” I whispered indignantly.
“Yes I know, but what can I do about it?”
“You can bloody well get out there and stop them as you’re paid to do!” I thought as I slunk silently back to my seat.
Was this a situation I’d have to deal with myself? Mentally I played out the possible scenarios. Blunt and aggressive; I’d storm up to them along the lower aisle –
“Stop making that racket!” I’d croak.
Demure and self-contained; I’d saunter up –
“Excuse me, you’re not allowed to eat in here,” I’d intone firmly.
Dark and threatening; I’d bob down in front of them and bring my face level with theirs –
“I think you should stop eating before I make you!” I’d hiss menacingly.
Mute and psychotic; I’d charge in, grab the offending bag and hurl it into the darkness.

Wait! There was movement. The usher had grown a backbone in the interim and was making his way towards the munching couple. I saw him lean down and quietly explain that eating was not allowed. They probably didn’t know the rules; foreigners most likely. They didn’t mean anything by it. All they needed was a quiet word. They’re alright.

Once again I settled back, a glimmer of a smile of peace and understanding on my lips, as by degrees, I fell back into the film.

It was during the “Snails and Oysters” speech, I think, that the rustling once again rose and edged its way into my awareness like the dripping tap of Chinese water torture. There could be no mistaking the intention this time. This was flagrant, a deliberate flouting of the ancient code and traditions of the BFI. These were not film lovers but film wreckers, impostors, devils, the Anti-Christ. 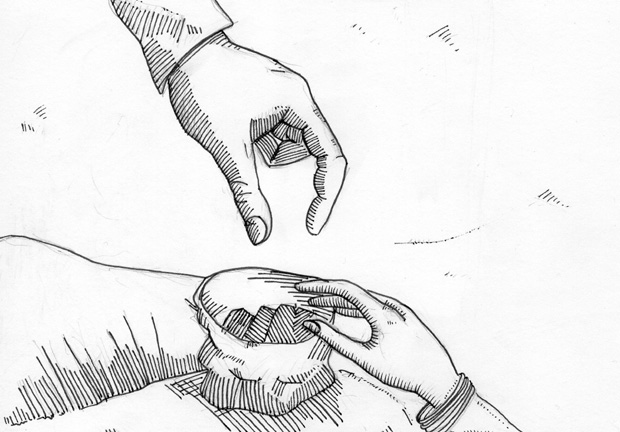 I looked round helplessly. The usher was a blurred outline, as insubstantial as the shadows he blended into. Hopeless.

And, as though this was a conspiracy conducted by some unseen and malign hand, I noticed a glowing white screen a couple of rows down. A middle aged woman – I could descry her receding chin and wobbling dewlap in sharp outline – was checking the time on her phone. Well, I presumed that’s what she was doing. This was a long film. She was simply checking the time. Wasn’t she?

Her little screen went black. Off. I was right. My eyes rotated back to the picture screen and the film I had paid to watch. The little screen flared white again. My eyes swivelled back like a chameleon’s following a fly. What in God’s name was she doing? Typing it seemed. It was a large faced phone – a ‘Blackberry’. She was sending emails! The device was angled in towards her, held furtively. There was shame in her posture. She knew that she was doing wrong.

Every few moments the screen would go black, the small screen that is (I had long since lost interest in the drama unfolding on the hundred foot screen at the front) then it would blink on like an opened eye and she would resume whatever it was she was doing – gossiping with friends, writing an opus, memos to self. It was indeed a concert of distractions and hers was now the violin solo, the chocolate munchers having dwindled into the murmur of memory. It would have been fascinating had not my mind been turned in loops of torment.
“Turn that phone off!”

The voice – strangulated, pained – cracked out over a quiet dramatic passage in the film. It was startling, as much for its unexpectedness as for its paradoxical qualities of rudeness and honesty. For a confusing few seconds I thought that it was me who had barked out involuntarily, pushed to the limits of endurance. But thankfully it wasn’t. Thankfully, because for me embarrassment still wins out over verbal honesty of expression. But it meant that I had an ally, that I wasn’t going quietly insane on my own, that there were others who valued the same conditions as I did for the watching of films – quietness, stillness, respect for others in the audience. 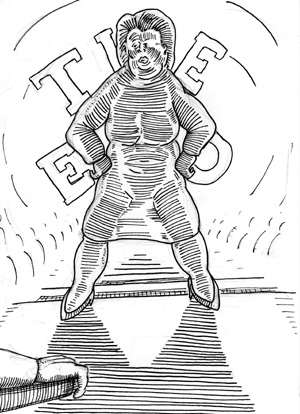 I could not see where the voice came from – heads diminished in size to the front like a series of round headed pins on a giant pin cushion. I could not even be sure that the lady with the dewlap was the target of his wrath. Perhaps there was another person with another phone somewhere else? Perhaps there was another drama identical to my own being played out in another quarter of the auditorium? And in how many other cinemas scattered across the globe had someone snapped because their escape into another world had been brought up short by talking, munching or the braying of a mobile phone?

The cry had checked her, but like the munchers, only temporarily, because I saw that she was soon back to her tricks. But the shout had acted like a release, uncorking the tension that had swelled in that interior, and I was able to return to the film with a little of my concentration restored.

The film soon ended but I confess that in the quieter, less dynamic passages my eyes had strayed towards Dewlap. She never halted in her surreptitious operations. It was baffling. Why would someone seek out a classic film only to ruin it by self inflicted distraction?

The credits began to roll and the pinheads began popping up and unfolding as human beings. I remained seated but with my eyes sought out, first the Munchers, and then because she was nearer and the wounds she had caused fresher, the Dewlap.

I sat as solid as a rock in a turning tide as the bodies flowed past me. I was angled towards her and my eyes burned into her featureless form as she shifted to her feet. I suppose I wanted to see for myself what this miscreant looked like, to make a mental note of the physiognomy of a female middle-aged film spoiler. There was also something in my attitude and fixed gaze that was condemning. She must have felt it because in a moment she had crossed the aisle towards me.
“Was that you that shouted at me?”

I was taken off guard. Many things struck me at once, not least her temerity in calling my brooding bluff. So that shout of annoyance was directed at her! She knew this, so she must have known that what she was doing was liable to cause offence. But her tone was defensive; I detected no contrition in it.
“No, it wasn’t me.”
The words left my mouth like retreating soldiers – single file, well ordered but cowardly all the same. It was true but I felt dishonest.

She gave my arm a squeeze by way of apology and shuffled up the steps. I was left staring into nothingness, perturbed that I had fluffed my moment.
“No it wasn’t me, but I felt like shouting at you!”

That’s what I should have said! Told her that the Shouter spoke for an aggrieved many. That her behaviour was irritating, a distraction, unacceptable. But I took the easy way out to avoid confrontation, causing a scene, embarrassment. And so I was left feeling rattled, angrier at myself than at her now, disappointed that I had missed my chance.