The dog was hungry, and with a pang, he realised he was as well – ferociously so. The cold water he had drunk was painful in his gut and seemed to remind him just how empty it was. Then he remembered the remaining chocolate bar. He had been saving it – for something. Wasn’t now just the right moment? A celebration and thanksgiving for his return?

He leaned over and took it from the table. He removed the wrappers slowly and ceremonially – first the coloured paper and then the silver foil. It lay naked in the palm of his and – long and black and brittle. He looked over at the dog. It was staring at his hands. Its mouth was open to its full extent. A red, gaping maw.

He snapped the bar in two, then changing his mind, he broke one of the pieces in half again. He tossed this quarter to the dog. It caught it neatly and swallowed it in one, as though it were taking a gulp of air. He ate the remaining chocolate himself. He tried to eat slowly but couldn’t control himself. Instead he chewed exaggeratedly until the bites had melted into a hot sauce, then he swallowed. When he had finished he looked over at the dog. The animal was staring at him intently. A long string of saliva dangling from its muzzle broke free and hit the ground. Louis opened out his hands.

The man realised he felt utterly weary. Physically and emotionally he was drained, spent. He knew he should check and dress his wounds, but he couldn’t face that now. All he wanted was to close his eyes and sleep. Tomorrow he would face the reality. Tomorrow he would make plans, such as they might be, and take action.

He hobbled to the fire and threw the rest of the wood on. Then taking a blanket he returned to his chair. He propped his splinted leg up on an old apple box, and swathing himself in the rug, worked himself back in the seat. Drowsily he looked for the dog. Through fluttering lids he glimpsed it padding away quietly to the other side of the fire place. 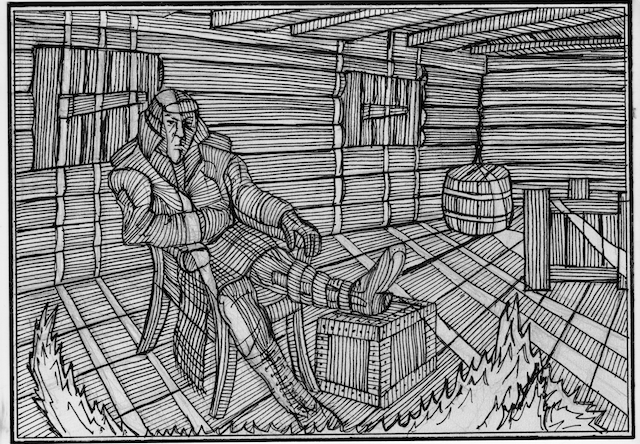 But the thought never finished itself because his eyes shut suddenly and he was asleep.

Why were they smothering him with the blanket? A cruel trick to play on someone so tired and broken. And such a filthy, stinking rag too! He began to splutter until he had coughed himself awake. The dog’s face was inches from his own, its jaws open, its hot breath choking the air. He uttered a cry and lashed out in reflex. His hand caught the creature on the snout. It yelped and fled. Louis cast about blindly from where he sat.

There were some muffled snortings from the other end of the cabin. The dog was settling itself. It didn’t respond.

The man drew the blanket tight about himself, keeping his hands and arms free. He stared hard into the darkness, baffled, disturbed. The whites of his eyes showed as two tiny half moons. The place was silent apart from the occasional pop of a disintegrating bough on the fire. He continued to sit, staring and alert, until his body sagged, from inside to out, and sleep took him back.

The cold woke him. The fire was out and fingers of pale sunlight slatted through gaps in the shutters and fell in bisecting lines of fiery whiteness about the interior. One fell across his face which was stubbled, crumpled and grey. He looked old and sick. He moved his face out of the light. Motes of soot turned lazily in the beam like fairy mobiles. The air was full of it. He shifted his frame and winced. His whole body cried out in protest. He attempted to move his left arm but could only do so with the aid of his right hand. It was as stiff as a rod. He looked down at his splinted leg, so innocuous looking in calf skin and wool. He feared moving it. Feared the injury. Feared the pain.

He looked for the dog, wondered. The table obscured his vision. It was probably beyond this, curled up on the mat. It was a blessing having company at this time, but then there were two he was responsible for, that he had to feed, that he somehow had to save… And then he remembered the dream. Or was it a dream? The awful sensation of being smothered. The great black dog’s head with open jaws, hanging in front of him like a phantom.

Once more he felt a terrible thirst. He tried to raise himself up in the chair but found that his left arm wouldn’t obey. He swung his buttocks in the seat and leaned over to get a view of the pan. The chair leg scraped. He groaned without realising it.

He felt, rather than saw, something flash across the room. He looked up. The dog stood in front of him, four square, as black and impenetrable as a shadow, ears pricked, mouth open in a quizzical smile.

Louis stretched out his hand. The dog remained motionless apart from the red tip of its tongue which would protrude, in and out, between its lips at the quiet heaving of its diaphragm. It stared at the man. Its eyes, which were a pale hazel, were unreadable. 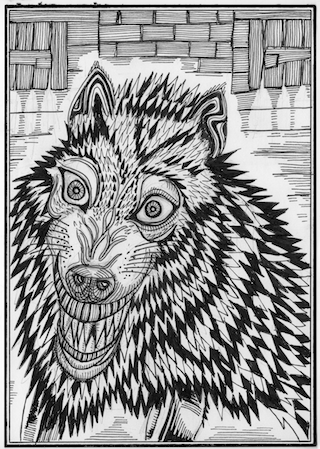 The man felt a little surge of annoyance. He struggled round petulantly and reached for the pan on the floor. There was a low rumble which seemed to emanate from both near, and from a distance. It was a chilling sound. The dog was growling. At him.

The man looked up. He was angry now.

The growling had stopped. The animal gazed at him impassively.

Once more Louis stretched for the pan, his hand splayed, his fingers straining. The red tongue appeared through the smooth black lips. There was a catch and the rumble started, building steadily.

The man scowled fiercely. Without looking round he made a lunge for the pan. The growl snapped into a short explosive gurgle. The dog flew at the exposed hand, seized it between sharp teeth. The man cried out in surprise and wrenched away. The dog released and danced back. It was all so quick. So strange. The room seemed to reel.

The man held his hand. Blood flowed from the puncture wounds. He sat with a stupefied expression. The anger had gone but in its place slooshed a sea of giddy uncertainty. He felt himself swaying. His whole world was shifting, slipping away.

“Loupo?” He said it as a question, quietly, as much to himself as to the animal.

The dog licked its lips, turning the blood around in its mouth. He didn’t recognise it anymore. In fact, had he ever really known it? Looking back, there always seemed to have been a shaded part in their relationship into which he was unable to tread. He bought the animal from an up-country trapper who was keen to make a fast sale. He was assured it was an Alsatian but the man disappeared soon after and he never saw him again. He never received the pedigree.

He remembered the bowie knife in the sheath at his waist and slowly began inching his hand towards it. Loup bared his teeth and began to snarl. He had decided that the man would have to die. He had avoided the prospect as being vile and treacherous (what, kill his own master?) but –

The hand shot down. The dog leapt. He took the man by the throat. He had once brought down a full grown stag in this way so a lame man was easy in comparison. He severed the carotid artery and crushed the wind pipe and in a few moments the creature was dead.

The dog remained in the cabin for another four days until the weather cleared. When he emerged his coat shone, lustrous and black. His eyes gleamed. He was seven pounds heavier. He was changed, inside and out. Forever.