The Secret of the Army Aeroplane (in the equally thrilling manner of Mr A.A.Milne).

May 1909 – England had never been more gay – except once at about teatime one June in the year ’06. Unbeknownst to the contented folk of that happy land, a web of nefarious German agents were putting into action a dastardly plot to bring down the Empire and deliver the country into the tender mercies of the iron-fisted Kaiser. 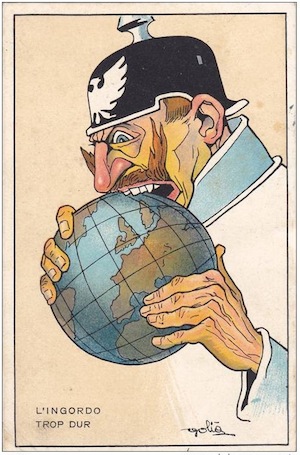 “The torch has passed to you, Mungo,” the Colonel intoned. “The security of the Empire is at stake!”
“I understand,” I said and put down the receiver.

My, but here was a rum do! I contemplated the terrible news Colonel Pongo had just revealed to me over the telephone. He had made it clear that recently intercepted German messages to their agents here, in England, pointed to the fact that the perfidious Hun was attempting to steal the plans for the Secret Army Aeroplane, sabotage a number of culturally important monuments and that they knew the identity of our top man in the field – Jack Jacox. Yet still the government would not take action!

The situation was grave, very grave. As I set my mind on how best to proceed, my old friend and confidante, Biffo Watkins, walked through the door. Brushing the remnants of the ineffectual barrier off his broad, Anglo-Saxon shoulders he fixed me with a concerned stare and asked,

“I say, Mungo what’s up? You look like you’ve been kipper-slapped by some ill-omened oracle.”
“I have indeed,” I replied, and proceeded to tell him said news.

“Well here’s one for the books!” he cried when I was done, “What are we to do?”
“What can we do?” I answered, nearly in tears of frustration at the thought, “The message indicates what the enemy is after and where he intends to strike but makes no mention of the who or how.”

Undeterred, Biffo drew himself up to his full height and demonstrated the indomitable sense of urgency and need for action which made him such an implacable foe to his country’s enemies.

“The Teutons’ intended targets must be watched around the clock!” he declared, “Scotland Yard’s stoutest, nimblest detectives, the brigade of Guards and a landing party of Royal Marines should be enough to deter any would-be saboteurs.”

Inspired by his decisiveness I made the necessary recommendations to Colonel P, who heartily agreed.

For the next two weeks we sat anxiously by the phone awaiting news.  Sure enough at the end of our vigil the Colonel called to tell us that all the German agents active in England had been caught red-handed as they attempted to put their diabolical campaign of terror bombing into effect. I set the phone down and Biffo and I exchanged hearty congratulations on a job well done.

“Let the Kaiser try and subdue us now by land, sea or air!” my old mess mate laughed manfully.

Suddenly, a horrible thought overtook me. I slapped a hand to my forehead. “Biffo!” I cried, “the plans for the Secret Army Aeroplane!”
“What of them?” asked Biffo.
“They were left unguarded. While the best investigative minds and stoutest troops in the land were guarding the Albert Memorial and Portsmouth Docks against enemy infiltration, the plans for the aeroplane were left totally exposed!” 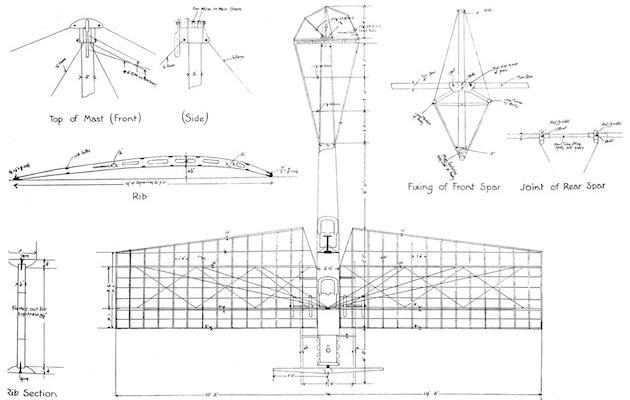 Biffo punched the palm of his hand in frustration as he saw what I meant. “Curse those German fiends! They’re more cunning than we anticipated.”
“What are we to do?”
“We must make all haste to them. Who is the progenitor of this aeronautical marvel?”
“A Professor Craigmyle,” I answered solemnly.
“Where does he live?”
“Knoydart Castle on the western coast of Scotland.”
“Is it difficult to find?”
“As it is isolated.”
“Which is to say…?”
“Extremely.”
“Then we may just be in time.”

We raced from the office and hurried to King’s Cross. We were just in time to catch the last sleeper to Glasgow where we would make the first of five changes including a boat ride to our destination. The journey took two days and was spent locked in uffish thought. Finally after bumping along the tracks we arrived in Mallaig early one evening. Commandeering a fishing smack we set out across the storm-tossed sea to the castle on the peninsular as night began to fall.  Disembarking at the jetty we sprang with all possible speed on to dry land and up towards the baleful keep. As we neared it lightning rent the sky and the wind and thunder crashed around our ears. Suddenly, Biffo gripped my arm. 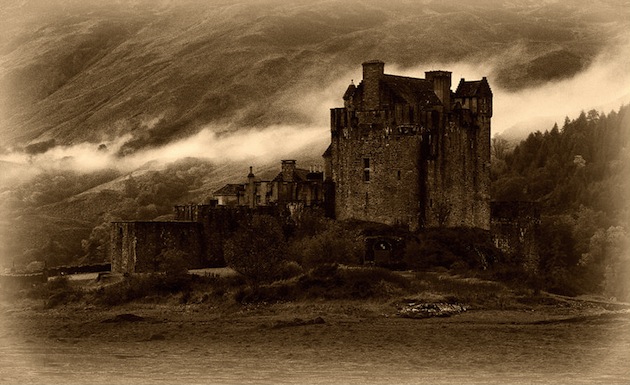 “Look!” he shouted above the gale and pointed to an open window above us out of which a curtain streamed. We hammered on the door calling for the professor. Getting no reply we applied our shoulders manfully and barged our way in. Inside all was silent and nary a light was showing. The place was as quiet as the grave.

“Do you have your electric torch?” Biffo asked.
“I’ve never been without it since that adventure in Basingstoke,” I replied, snapping it on, the beam lancing through the darkness.
“Let’s get on then,” Biffo declared, drawing his revolver.

We headed up the stairs and, on the landing, the torch beam lighted on a crumpled figure. Biffo turned him over – it was the professor! A quick check of his pulse revealed he was still alive. Just then, above the rattling of the storm on the windowpanes, we heard what sounded like someone ransacking a nearby room. Biffo pursed a finger to his lips and motioned to me to turn off the torch. We took up positions either side of the door from which the sound was emanating and at a sign from Biffo rushed inside. I turned on the torch again at our entrance and full in its glare we caught sight of a masked figure by an open safe.

“Stop there, you Hun villain!” cried Biffo but the shadowy figure dashed for the open window and disappeared into the night. We leapt to the aperture but could see no sign of the intruder on the ground.

“There he goes!” Biffo exclaimed and I looked to the roof in time to see a leg disappear over the eaves.

We raced to the roof and emerged on its rain-lashed plateau to find the mysterious stranger standing on the edge – trapped! He turned at our approach, a flash of lightning revealing his monocle-adorned, aristocratic face pinched into a Teutonic sneer. 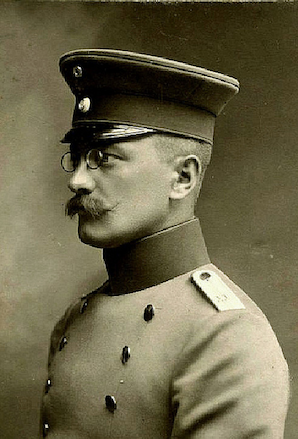 “Not so fast,” announced Biffo covering him with his pistol, “Hand over the plans, Fritz.”

The German smiled a particularly sinister smile. “Captains Mungo und Votkins, how nice of you to join me,” he greeted us by name leaving us momentarily speechless.

“How do..?” I began.
‘Zere are many things ve know about England’s intelligence services meine Herren and about you most of all!”

His English was excellent. Only the inescapable linguistic inflections of his race gave away his diabolic Teutonic heritage.

“And now meine Freunde, I must bid you adieu.”
“You’re not going anywhere you low-down sausage merchant,” Biffo decreed, “Now hand over the plans!”
“My dear fellow, I heff no idea vot you mean,” the agent laughed.

And suddenly, from above, the low thrumming sound of an engine caused us to look up. Lowering over us was an enormous dirigible trailing a rope ladder. With enviable nimbleness even in so base a foe the German agent seized upon the ladder and was carried out of our reach before we could recover our senses. As he disappeared into the distance over the loch he raised an arm in salute, his parting words carrying on the wind.

“Auf wiedersehen, my dear chaps. Better glück next time perhaps?” followed by a shrill, piercing laugh as he climbed the ladder into the bowels of the zeppelin.
“Curses!” I cried shaking my fist after the fiend. 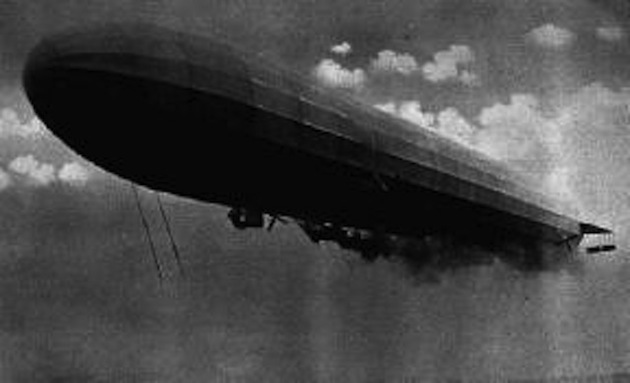 Biffo and I stood on the roof as our quarry made good his escape. “What now?” I asked with heavy heart.

Biffo was silent for a moment as he looked stoically out to sea. Then he replied, “Mungo, my friend, I fear we must embark on a mission of deadly import.”

“You mean?” I inquired with trepidation already knowing the answer.
“Yes,” Biffo interjected, “We must travel into the heart of the Iron Reich and retrieve those plans before the enemy has time to use them against us!”

The very mention of that beastly place sent a shiver down my spine but I hardened my resolve and knew that it must be done.

WILL MUNGO AND WATKINS SUCCEED IN THEIR ATTEMPT TO TRACK DOWN THE GERMAN AGENT?
HOW LONG DO THEY HAVE BEFORE THE ENEMY PERFECTS THE WAR-WINNING WEAPON?
TUNE IN NEXT TIME FOR MORE RIP-ROARING, DEATH-DEFYING ADVENTURE!

Look out! The Secret of the Army Aeroplane continues next Sunday, only in The Arbuturian – your Number One read for cracking adventure and derring-do!