The Secret Army Aeroplane, Part II in which our heroes travel to Germany to retrieve the plans for the army’s secret weapon from the clutches of their arch-nemesis…

After the German agent’s unsporting escape from Knoydart castle with the plans for the Secret Army Aeroplane, Biffo and I planned how to win them back. Drawing on interrogations from the German spy ring rounded up in part I, we began scraping together precious morsels of information on our quarry. He was, as most Germans are, an aristocrat of some sort.

‘His name is Baron Wolfgang von Spätlese,’ Colonel Pongo told me over the telephone. ‘He has most likely returned to his mountain fastness, Schloss Grünemantel on the Austro-Bavarian border.’ 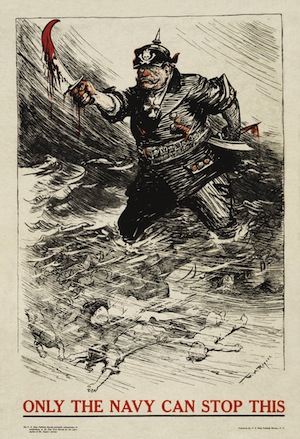 ‘Ha!’ I said.
‘Quite,’ said Colonel P.
“But, Colonel?’ I asked, suddenly anxious. ‘Won’t the troublesome Hun have already given the plans to his masters in Berlin?’
‘Not so Mungo,’ quoth the Colonel. ‘The plans are so vital and the operation to gain them so secret, the Baron was ordered to return to his lair and await further instructions. No doubt his masters wish to study the blueprints at leisure and away from prying eyes. The plans must be in Schloss Grünemantel!’
‘Ha!’ I cried again putting the receiver down.
‘Well?’ my stalwart companion, Biffo Watkins, queried.
‘We have him!’ I announced banging the palm of my hand down on the tabletop. ‘He lurks in his malevolent Alpine fortress!’
‘Then there’s no time to lose, by Jove!’ Biffo cried exultantly. ‘We must make haste!’

The following week we caught the train for the coast, then a steamer to Boulogne and finally a locomotive, which, with every lap of its pistons, took us ever deeper into the iron bowels of the Reich. As we rattled through the German countryside the scenery changed agreeably from the riverine pastures of the Rhine to the rolling uplands of Bavaria. The peaks of the Alps, their sides streaked with ice, providing a formidable, menacing backdrop.

‘It’s pretty country around here,’ Biffo remarked.
‘Dashed pretty,’ I agreed.
‘Not as pretty as Scotland, of course.’
‘Of course not.’
‘And full of Germans, too,’ he observed damningly.
‘Yes.’ I concurred, ‘it is rather a pity.’

As we approached our destination, we spotted a forbidding donjon perched atop a mountain. ‘If my Jenning’s Guide to Southern Bavarian Castles is to be believed,’ Biffo declared, ‘that is Schloss Grünemantel.’ 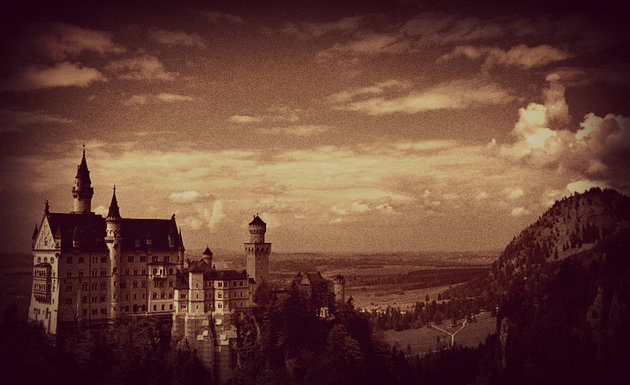 I shuddered, gripped by an involuntary chill, but fixed my eyes once more on the baleful keep. We dismounted from the train and hadn’t gone more than a few steps when Biffo clutched my arm.

‘Don’t look,’ he whispered, ‘but I’ve spotted a rum cove with his moustaches brushed the wrong way, who I think may be watching us.’
‘Are you sure?’
‘He got on the train with us at Ulm and I haven’t trusted him since. I fear he may be a confederate of von Spätlese.’
‘Heavens,’ I breathed, ‘Then the Baron may be aware of our arrival!’
‘Indeed he may,’ Biffo confirmed, ‘we shall have to be on our guard. I suggest we speak in Pig Latin to confuse our new friend.’
‘oodgay ideay.’

As innocently as possible we crossed the street and headed for the nearest gasthaus, the Ritzhof. Our time over the next few days was devoted to the gathering of intelligence and taking long walks in the direction of the castle to best gauge our approach. When anyone asked who we were and what we were up to, we simply answered that we were Norwegian mountaineers on a hiking holiday. Our constant use of Pig Latin, Double Dutch and Turkey Irish seemed enough to convince everyone of our non-Englishness and we were left alone. 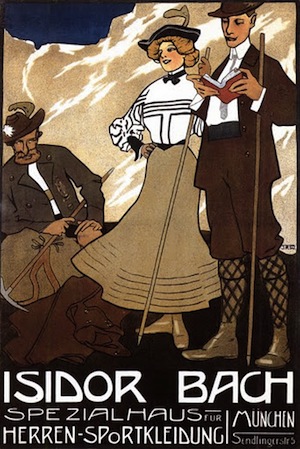 Finally, plans laid, we were ready. Biffo and I set out as night fell, our hearts hardened to the task before us.

‘Have you got your electric torch with you?’ asked Biffo as we neared the castle.
‘Of course,’ I replied, ‘I’m never without it after that incident in Torquay.’
‘Good,’ said my stalwart companion.

Grimly determined we continued our approach. Our plan relied on a mix of bluff and dash. Eschewing the underhand sneaking about that characterises foreign agents, we marched straight up to the doors upon which Biffo landed two sonorous blows. After a short wait, a small square window in the door covered by a grill opened and a fierce voiced barked, ‘Wer da?’

‘We are Norwegian mountaineers on holiday,’ Biffo explained in his very best German, ‘may we come in please?’

The small window snapped shut and after much scraping and clunking of metal, a wicket gate swung inwards and an enormous Teuton half emerged. ‘Who are you?’ he asked again.

Undeterred, Biffo drew himself up to his full height and demanded entry once more. But the porter was obstinate and would not let us in. Scratching his chin, Biffo turned to me and said out of the corner of his mouth, ‘On’tday orryway, I avehay anay ideay. Ollowfay emay.’

Biffo turned casually back to the porter as if to continue the conversation when he suddenly started and pointed. ‘What’s that!’ he cried. The doorman turned to look and in a trice we were on him and had him bound and gagged like the prize turkey he was.

Biffo looked up from our handiwork. ‘The German can always be counted upon to fall for the oldest tricks in the book,’ he declared triumphantly.

Proceeding through the wicket door, we entered the gloom of the castle like Christians. I snapped on my electric torch as we wandered the corridors of that beastly place, each sweep of the beam revealed a fresh suit of armour, a mounted set of antlers or assorted weaponry.

‘We shall never find him in here,’ I whispered in desperation, ‘though we may wander all night.’
‘Courage,’ said Biffo patting me on the shoulder, ‘all is not lost yet. See, I spy light coming from behind that door.’

Sure enough, a flickering glow could be seen emanating from beneath the doorsill. Biffo drew his pistol and we advanced on the door. Readying ourselves we burst into the room with a hearty, ‘Hands up, Fritz!’

But there was no one there! The room was evidently a banqueting hall, with a tall ceiling, a long table running down the centre and with a roaring fire at the far end. Cautiously, we advanced a little further. Suddenly a well-known voice sounded behind us. 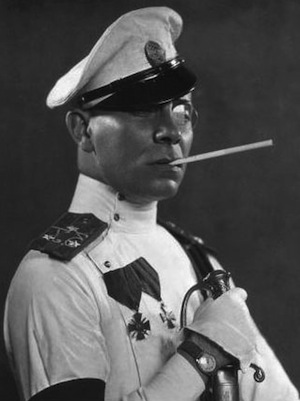 We span around and found ourselves staring into the arrogant, monocle-adorned features of a uniformed Baron von Spätlese. He smiled his diabolical smile at us as his henchmen – including the rum cove at the station with his moustaches brushed the wrong way whom Biffo had spotted – covered us with their pistols.

‘Gentlemen, please raise your hands. Captain Votkins, your pistol if you please, and Captain, your electric torch.’
Biffo handed over his Webley and I my faithful old torch and, looking sullen, the two of us raised our hands.

‘Und now, dear chaps, please make your way over to the fire…you must be frozen.’

We turned and headed towards the fireplace.

Standing in front of the fire, our Hunnish captor proceeded to gloat once more at our predicament.

‘Oh dear, gentlemen. You appear to find yourselves in a bit of relish, don’t you?’
‘I think you mean pickle,’ Biffo corrected him.
‘Quite,’ the Baron accepted the amendment to his condiments with equanimity.
‘Where are the plans, you cove!’ said Biffo.
‘Tut, tut, Captain Votkins,’ Baron von Spätlese scolded him. ‘Let us not be too hasty…nor impolite. The plans are here, as you so clearly divined. An emissary from the Kaiser will be here to collect them in due course to take them and now you back to Berlin. There can be no doubting the completeness of Germany’s victory now. Until then you shall remain here as my guests.’

He turned to the henchman with silly moustaches and snapped, ‘Nehmen die Gefängene in Verlies.’

Hands still high above our heads, we were led away – prisoners of the sinister Baron, his maniacal laughter ringing in our ears!

CAN MUNGO AND WATKINS ESCAPE FROM THE CLUTCHES OF THE FIENDISH BARON?
IS THIS THE END FOR OUR INTREPID PAIR?
TUNE IN FOR THE FINAL, THRILLING INSTALMENT NEXT TIME!

Stand by! The Secret of the Army Aeroplane concludes next Sunday, only in The Arbuturian – your thrilling tip-top read for cracking adventure and derring-do!