The Secret Army Aeroplane, Part III (In which, imprisoned by the devious Baron von Spätlese, our heroes appear to have been undone.)

It is fair to say that Biffo and I found ourselves in a rum position indeed. We had faced adversity before – once cornered by Pathans in the Khyber Pass and more perilously in our youth by a marauding throng of Parisian debutantes with matrimony in mind – but never in a situation as grave and hopeless as that moment. Biffo, sore with cursing our captor and his caddish ways, sank down beside me in a funk. 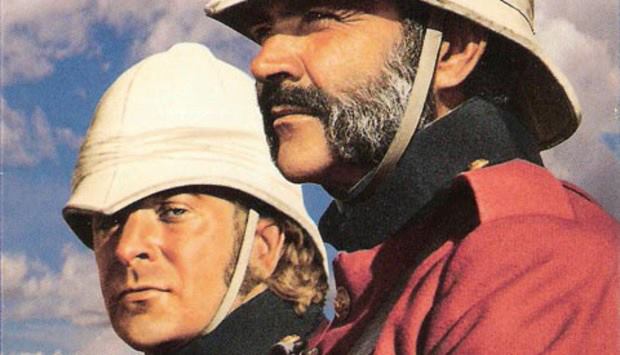 ‘Mungo, old chap,’ he confided in me, ‘I think we may have had it this time.’
‘Biffo, old man, I fear you may be right.’
‘No doubt we’ll be shot as spies for this one.’
‘Horribly tortured first, I shouldn’t wonder.’
‘Without doubt,’ Biffo nodded, ‘of all the races of the world none can surpass the Teuton in wanton savagery.’

As we sat, grim faced and grey, the first trickle of dawn’s light crept between the bars of our cell window. The rest of the day was spent in silence, each of us contemplating our eventual, terrible fate.

At midday there was a scraping in the lock and the door swung open to reveal the two villainous henchmen. Grinning at us oafishly they kicked two bowls of thin gruel in our direction and took to taunting us in broken English. 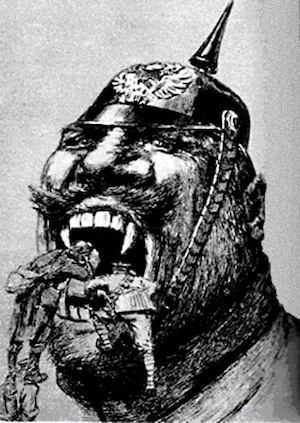 ‘Ha, ha,’ said the first, fat and bullet headed, ‘I zink zat you have, in ze freiherr, your Spiel erfüllt.’
‘Ja!’ said the second with his moustache brushed the wrong way. ‘Und now you erschossen vill be, like ze common Verbrecher you are.’

This the two of them found very amusing and, laughing at their own crude humour, they left us.

‘Fiends,’ Biffo cursed under his breath. We picked at our gruel but it was too disgusting for words. ‘The German is the least inspired cook in the world,’ Biffo told me and I could well believe him.

Finally the Sun began to set and our cell grew dark once more. Then we heard the sound of footsteps approaching once more and the flickering of a lamp could be seen through the door grill. Yet again the sound of scraping metal could be heard in the lock. Biffo and I slid our backs up the wall, convinced our time had come. We straightened our jackets and prepared to face death like Englishmen.

We clasped hands and then turned to face the door. It swung inwards slowly, with an ominous creak and we tensed, whiskers quivering and chins thrust forward. We were caught full in the glare of the lamp but, to our great surprise, the only thing that loomed out of the darkness was the face of the henchmen with his moustaches brushed the wrong way.

‘I say, chaps,’ the henchmen declared in faultless English, ‘sorry to keep you hanging around like this. To act any sooner might have blown my cover.’

Biffo and I looked at each other in amazement. By his lilting Harrovian tones I could only assume that our apparent deliverer was Colonel Pongo! But how could this be? 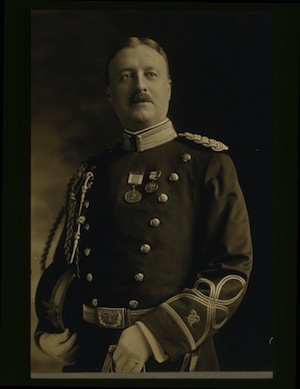 ‘Colonel?’ I asked, ‘is that really you?’
‘Indeed it is Mungo,’ quoth he, and he peeled away the false German moustache to reveal a perfect British one underneath.
‘Colonel!’ we cheered, ‘It is you! But what are you doing here?’
‘I thought you might need some help on such a perilous assignment. In disguise I placed myself in the Baron’s employ and have been following you for the past few days. I hope I was discreet?’
‘I’m afraid Biffo spotted you at Ulm,’ I reported.
‘Oh,’ said the Colonel sounding disappointed.
‘But how did you wangle your way into the Baron’s service?’ I continued.
‘No time for questions,’ said our liberator, ‘a fat German emissary has just arrived to collect the plans.’
‘Then there’s not a moment to lose!’ cried Biffo.
‘Ha!’ said I.
‘Follow me!’ said Colonel P and we sallied forth from our cell in tearing haste.

Racing through the corridors of that horrid place we came once more to the banqueting hall. Catching our breath the Colonel turned to us.

‘You may need these,’ he advised and handed over Biffo’s pistol and my electric torch. Suitably armed we braced and crashed through the door catching the foe completely by surprise!
‘Hoch, hoch mein Gott!’ cried the fat emissary in alarm.
‘Nowhere to run now, Baron!’ Biffo cried triumphantly. ‘Hand over the plans!’

The Baron however was quick to recover. Drawing his rapier he called for his men, who came rushing into the room. ‘Biffo!’ the Colonel shouted, ‘get the plans. Mungo and I will see to the rest.’ 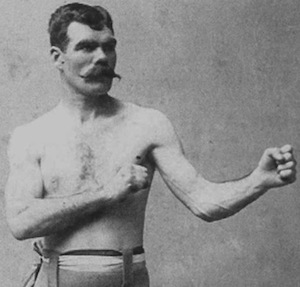 Arming himself with a rapier from the wall, Biffo sprang onto the banqueting table and engaged the Baron in a furious duel. The Colonel and I meanwhile did indeed see to the rest. Biffo had often said that though the Hun may pride himself in low cunning he is no match for a Briton in a stand up bout of fisticuffs.

Jabbing and jinking we set them to rights and as I laid out the fat emissary with a right hook the Baron knew the game was up. Parrying a fine thrust from Biffo, he displayed the same acrobatic skill he had employed when he eluded us in Scotland. Leaping from the table to the open window he paused to throw us a backward glance.

‘You have won his time, gentlemen. But you shall not be so lucky at our next meeting,’ he declared with his usual haughtiness. Biffo made for him but, without a moment’s hesitation, the Baron leapt from the window and into the moat below.
‘Curse his impudence,’ said Biffo valiantly.
‘Tis of no consequence,’ Colonel P said laying a hand on his shoulder. ‘The plans are recovered, the enemy thwarted and the Empire safe.’
‘Ha!’ said I.

Safely back in London, Biffo and I congratulated each other on a job well done.

‘Colonel P wasn’t too pleased you rumbled him so early on,’ I laughed.
‘Indeed not,’ Biffo agreed, ‘but we couldn’t have done it without him.’
‘ Perfectly true,’ I concurred and we mused silently over our whisky for a moment and then I inquired, ‘Do you think we shall have to face the Baron again? Can he have survived such a plunge?’
‘I don’t doubt it,’ Biffo stated, ‘perhaps sooner than we think. What’s more I fear it is only a precursor to a far greater challenge.’
‘You mean…’ I began.
‘I mean,’ said Biffo solemnly, ‘a time when it will not just be the Baron we have to face but indeed the whole of the German aristocracy in a fight to the finish.’
I shuddered at the thought. ‘Well let us pray it will not come too soon.’ 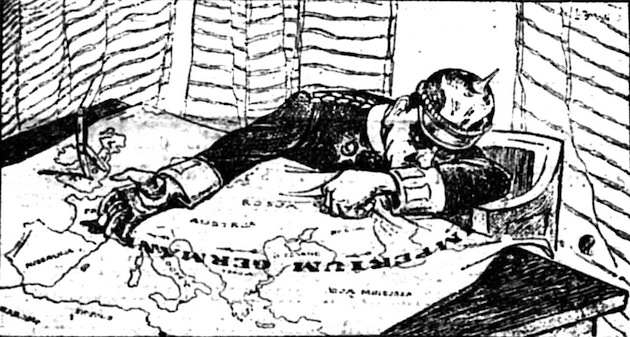 Just then the phone rang.