As I walked in through the front door, something inside me died.

It had all been so different a moment ago. La Signorina and I had just travelled over from Como on the hydrofoil into the small lakeside town of Bellagio. The Grand Hotel Villa loomed proudly on arrival, and its yellow walls appeared to offer an enticing vision of luxury beyond belief. ‘This looks jolly, does it not?’ quoth La Signorina as we skipped merrily into what promised to be another memorably beautiful Italian hotel. 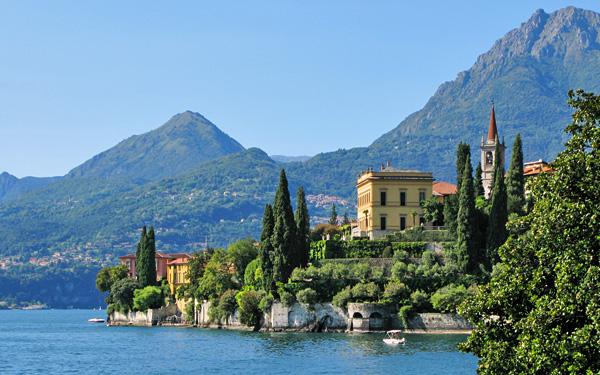 It was certainly memorable, but for all the wrong reasons. The first thing we saw upon entering was an oily young man, the sort who makes underage girls pregnant and then sleeps with their mothers by way of recompense. He ignored me, leered at La Signorina, and then sent us off to a small desk where the assembled staff couldn’t find our reservation details.

I glanced around me. It was ornate and grand, certainly, but in a very strange, municipal way. It was as if someone had seen The Shining and regarded it as an instructional manual as how to run a large, popular hotel. Ghostly guests, mainly elderly and American, drifted past, expressions of doubt and pain on their faces. La Signorina was speaking, animatedly, in Italian. I was quite impressed, although the contempt on the faces of the reception wallahs indicated that she might as well have been speaking Swahili. Although sometimes I feel that as well.

After mutual contempt and some thinly-veiled hints that we should leave, we were eventually shown up to our room. Despite our frosty welcome, part of me was still vaguely excited. I was looking forward to relaxing on luxurious Egyptian cotton sheets and a deeply soft mattress, possibly putting my iPhone onto charge, tucking into the delicious complimentary fruit plate and then jumping into the power shower. I mean, the place boasted five stars, didn’t it? And such things come as de rigeur, don’t they? Don’t they? 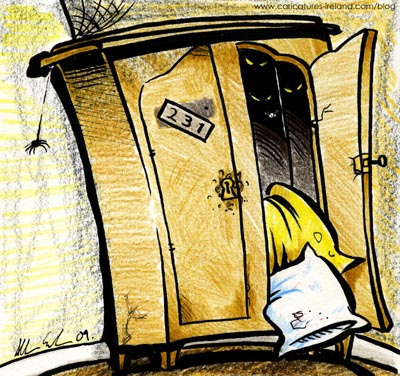 Alas. The first impression that we had walking into our cramped, claustrophobic room was that nothing had changed since the glory days of the late 1960s, when every film starred Richard Burton and Elizabeth Taylor and contained a gratuitous two-minute plug for whichever hotel the producer had managed to scam accommodation and facilities out of. The wallpaper leered at us as it peeled, silently. A brown stain on the ceiling spread its sad load across the tops of the curtains. The beds were two shabby singles conjoined in unlawful matrimony. The bathroom was so perfectly preserved a monument to high standards of plumbing and upkeep circa 1971 that we wondered for a moment whether we’d walked into a National Trust recreation of a bygone age. The wardrobe was merely unspeakable. La Signorina and I looked at one another, and then fled to a bar to begin drinking heavily.

Somewhere around the third glass of white wine, a plan was hatched. We couldn’t seriously be expected to stay in a room like this, could we? We would go back and ask for the manager. He would be a reasonable sort, and we would have our room changed. Prestissima. Emboldened by our decision, we returned to the hotel, confronted the downstairs harpies once more, and asked that we might meet the master of the house. This man, we thought, would be a sort of fairy godfather, ready to come to our aid and make our stay a far more pleasant one.

As we waited for this neo-Adonis, we heard a cough. A short, bald, repellent man sidled into view with the charm and elan of a flasher. He looked for all the world like a paedophile, but one who had been too mean to buy the children sweets to entice them in 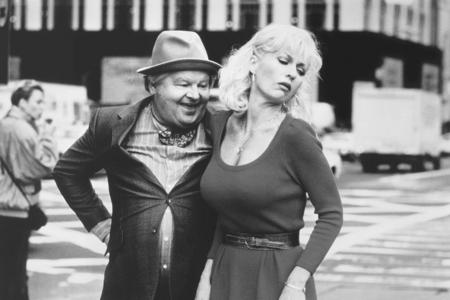 the first place, relying instead on charisma and charm. Presumably his lack of success in this department ensured that his career as a hotelier was to be crowned with a far greater degree of aplomb.

I glanced, nervously, at La Signorina, who had been nominated to play St George to this curious little dragon. She cleared her throat in that charmingly theatrical manner that she sometimes has, before the rows begin.

‘We really love the hotel…but our room’s a bit on the small side, and we were wondering if you had anything a bit…bigger?’

The man’s expression darkened. We both tensed. Physical violence was clearly imminent. He may have been small of stature, but he had the rage and frustration common to all of those who were unable to reach up to the top shelf to buy pornography while younger. Come to think of it, he’d probably have been unable to now. He glared at us for a moment, and we glared back at him. To anyone passing, it might have looked like none of us understood one another’s language. But we understood it all too well: it was the language of fuck. As in ‘off’, ‘you’ and ‘sake’.

We had displeased the dwarf, and so as a punishment we were taken on an hour-long tour of his lair. There were numerous comic highlights. A subterranean spa and indoor swimming pool looked like a grotto, inhabited by several pan-European trolls, with enormous pale bellies and curious growths of hair where follicles normally dare not venture. The breakfast room was a pointlessly large and grand neo-Versaillean folly, making one think less of the delights of 18th century French aristocracy as the likelihood of an imminent revolt. The restaurant – which we were more or less explicitly told wasn’t for the likes of us, shabby plebians that we were – served peacock tortellini. The lift rattled and made strange sounds, as if lost souls were trying desperately to escape its ominous clatter. All the while, the curious little man made sneering comments and came out with strange, antiquated name drops. We were informed that Gloria Gaynor had been a previous guest. She might have survived, but we were entirely unsure whether we’d be able to.

Eventually, the tour came to the end, and we were banished back to our miserable quarters. In a display of magnanimity, a half bottle of Prosecco had been sent to our room. It was revolting, and the strawberries with it sour. We wondered whether we had 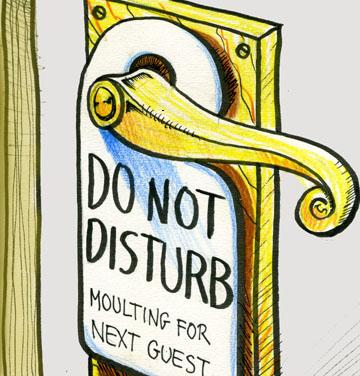 been poisoned. We looked at one another, and La Signorina began to weep.

I nodded, and said through gritted teeth, ‘There were a lot of things that we should never have done. But now we have to be brave, and drop the poisoned ring into the mountain. Or just survive 48 hours here.’

The usual bad business went on over the next couple of days. The bathroom door would not lock, instead swaying open ominously. We heard a ghostly voice in the room after breakfast one day. The tap water poisoned La Signorina. Unpleasant little hidden charges appeared on the bill. Wi-fi cost 7 Euros a day. The room smelt slightly of damp. Even the weather that came over us was depressing, swapping sunny vistas for grey, misty sludge. The very mountains looked as miserable as we did.

On the last day, we fled to the boat that would take us away from all the beastliness. The vile man who sold us the tickets pointed out, with evident glee, that we’d missed the ship we wanted and that we’d have to wait another two hours. We had a choice; did we return to the hotel and wait in the sitting room, possibly nursing a small brandy, or did we sit on a bench in the miserable, damp air, without food or sustenance? We looked at one another. The choice was clear.

‘Better get my raincoat out,’ La Signorina said.