I walked to Oxford Circus yesterday. Joined the canal at the bottom of Agar Grove. Reclaimed the city as only walking can. It is neither as big nor as scary as it appears. The basin at Camden Lock is a fascinating place and continues to be despite the commercialisation of the area. The place teems with Hogarthian characters and the same types will have lurked or strolled no doubt in Shakespeare’s time too, and even earlier. Punks, Goths, pimps, loafers, layabouts, tramps, drunks, pushers, interspersed with the occasional lost tourist and the flash of a passing cyclist. When I passed there were a couple of stringy lads hammering on the bongos in the little island between the two locks. Water cascaded down either side of them as the locks were wheeled open, framing the whirring of their hands. They were there two hours later, having shifted to the grassy verge bordering the path, their vigour, if anything, unabated. 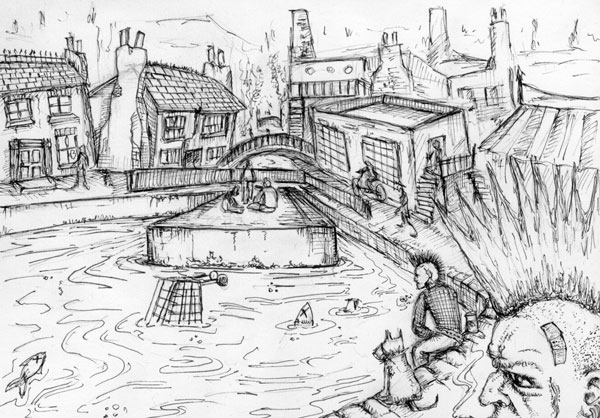 Seeing the teenage Goths and wannabe rock stars is particularly poignant. There they lounge and sit cross-legged in rangy groups, smoking fags, sipping furtively from beer cans, dressed in rag-tag multicoloured garb which is part 1977 and part now, and which only creatures of their age and their nascent creativity could pull off. Their talk I imagine (although sometimes I capture snatches of it) is of boys and girls, bands, holidays and illicit forays into the adult world. They desperately want to be part of this adult world, to be admitted into pubs, to be on equal terms with the fellow clubbers and rock stars they glimpse from a distance, but thankfully, they are apart. They are fey, tentative, ephemeral, possessed of a shining, lovely but very fragile innocence which they neither see nor value. They look with awe upon the hardened mohicaned punks who squat on the dusty banks, laughing like hyenas, swapping cracked and senseless stories, but they don’t see the broken dreams, missed opportunities and draining ennui that clings to them like leeches. Thus on Camden Lock, innocence spies on experience, experience spies on innocence and both desire what neither has got but one will get and the other will never see again.