Trending
You are at:Home»The Lifestyle»The Idler»The Art of Trees
By Sarah Tucker on August 29, 2021 The Idler

I’m covered in paint.  As the weather has been seasonably English this summer, I’ve used the time to paint the inside of my house with (mock) Farrow and Ball colours (prosaically-named Egyptian Cotton masquerading as ‘Ammonite’, and ‘Village Fete’ more like Mizzle – the colour of drizzle and morning mist, allegedly).

In search of the real outdoors, and some genuine colour rather an impression of it, I took myself away from the capital, to the Test Valley, on more creative endeavours at the Hampshire Art Studio in Bransbury, halfway between Andover and Winchester, to practice my painting skills. Like many, these skills were last exercised for my A-Level Art (I got an A, don’t you know), and so I sought out a course which suggested all levels would be welcome, but would equally be more taxing than paint-by-numbers or the grown-up colouring in books which have fashionably appointed themselves as art therapy. I have never found them to be therapeutic myself, hence this option; a two-day course in the Hampshire countryside, focusing on the painting and drawing of trees. Now, that sounds like a far more likely ticket to therapy, if you ask me. 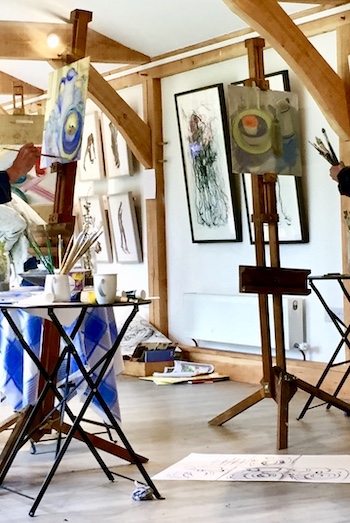 The studio, founded by former advertising director Clare Dryden and renowned artist and wood turner Kate Measham, and based at Clare’s home in Bransbury, looks out over the river Dever, a tributary of the Test. Willows, lime, silver birch, oak and yew trees canopy the main building which windows the picture of countryside with floor to ceiling glass on one side, framing the blink-perfect realised idyll of English landscape. During the winter season (September – December, and January –March), there’s a wood-burning stove to keep the artists warm, and in the summer season (April –July), when (hopefully) it is warmer, courses are held outside aswell.

All paints, easel, and paper are provided, and tutors all have an international pedigree. Fiona McIntyre, acclaimed artist and founding member of the ‘Arborealists’ a group of artists who specialise in the artistic celebration of nature, following a landmark exhibition in 2013 Under The Greenwood: Picturing The British Tree at the St Barbe Museum of Art, was our tutor for the course. She discovered her love of nature and in particular trees when introduced as a child to the Barcaldini Forest of Argyll and Bute in Scotland by her grandfather, who worked for the Forestry Commission. She was in awe of him as he was able to name every plant, tree, mushroom, bird and geology of the place.  She travelled extensively exhibiting her work, studying in England, Sweden, Iceland, and Scotland, gaining her degree in Scotland and MA in Winchester. Influenced by the Russian artist, Wassily Kandinski, and American painter, Helen Frankensthaler, her extraordinary story reads as though she met a Bloomsbury set on her travels, mixing with musicians, writers, academics and creative thinkers.  As well as fine art, Fiona is also trained and experienced in graphic design which she shrugs ‘helps to pay the bills’. 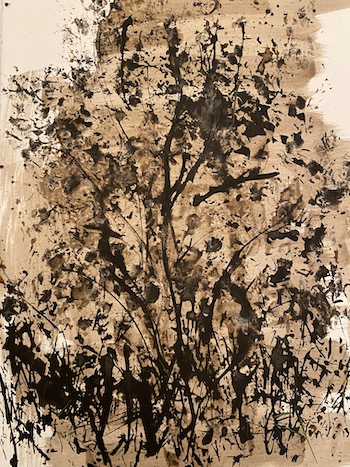 McIntyre makes the two days fast and fun.  She’s engaging and accessible, showing more than telling, giving us all courage to ‘explore the trees’ – not just paint what we see, but paint what we feel.  The first morning is spent taking part in a sort of art version of speed dating. Ten of us on the course, circling the area like flower fairies, went outside with easels and graphite and were told we could spend sixty seconds drawing the trees – but could not look at our paper. Fiona had a stop watch, and on ‘go’, we all went for it. I looked at my first version. It looked like the sort of thing a psychologist would have a field day analysing.

I moved to the next easel as someone moved to mine, and had another go, managing not to peek at the paper (others cheated, ahem) and, this time, it looked more like three people at a party slightly swaying to ‘80s music the worse for wear. My leaves looked like smudged birds ready to fly off the page at any moment. Then the time was reduced to thirty seconds, then fifteen. Everyone agreed their fifteen second version was much more proficient than their sixty second version, as they went with the flow and had gained more courage. They key was not to take the graphite off the page and to scrawl quickly.

We didn’t use colour or paint at all the first day, just printer’s ink and walnut oil as a wash, sitting by the river and choosing our trees to draw. Studying them closely, I realised how they change each time I looked, how the light changed – they were in constant motion, and that I, not them, was the one who was static. 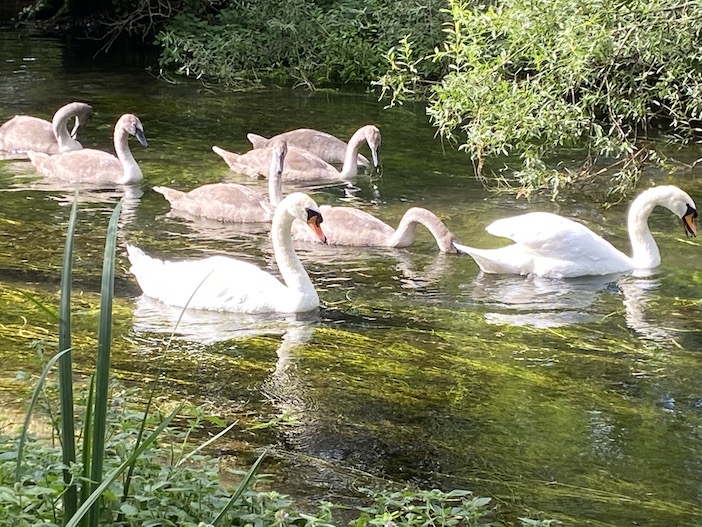 Tea, coffee and cake are provided during the morning and afternoon breaks, (Clare makes her own lavender gin if you need something stronger), and I found myself chatting to the others, some of whom were professionals wanting to improve their ‘eye’; others, like me, just wanted the opportunity to explore their artistic side and have a touch of therapy. The experience is certainly calming; the combination of nature and painting, two empirically proven ways to calm the nerves and focus the mind. Far more testing than the adult colouring in books that are currently in vogue.

On the second day we were allowed to use paints. We could select three warm and three cool colours to create our impression of the trees. Fiona talked of the dialogue between the trees and ourselves. If you’re thinking this all sounds very zen, I can attest that when you start to paint what you feel you end up with a more successful impression.  I my case, I see trees as being very healing and informed, with a sense of humour, so I used lots of turquoise and yellow in the leaves and blue and red in the bark. Not a stroke of green or brown – and they still looked like trees. 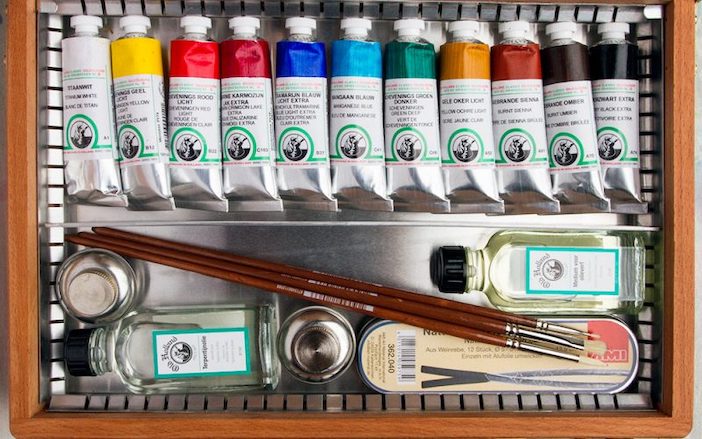 As the day progressed, observation turned into more of a philosophical enquiry.  I suspect this is why the good and great have always sat by or under trees, and forest bathing and tree-hugging are on trend. Isaac Newton stood under a tree, Buddha was enlightened under a Bodhi tree, there’s the tree of life, of knowledge, and my favourite children’s book is Shel Silverstein’s The Giving Tree. And yet, shamefully, the UK is the least populated by trees than any other country in Europe. We harp at the South Americans destroying the Amazon but the British have decimated our wild forests and woodlands, so that now only a pitiful 4% of our landmass is woodland. There are charities aiming to rectify this and Fiona gives a percentage of her takings to charity treesforcities.org, which aims to put trees back into cities. Spending time gazing at trees from dawn till dusk for two days in the Hampshire countryside, especially in light of the Covid lockdowns defining what is considered essential and non-essential to life, made me wonder how our values are vastly skewed.

Keeping with the tree theme, I made time to visit the Sir Harold Hillier Gardens, just outside Romsey, which has several champion trees for which the 180 acre site is famous. A champion tree, incidentally, is the best of its kind in its area. It might be the tallest, widest, thickest or oldest of a given tree species or cultivar. The Tree Register of the British Isles collates data of thousands of champion trees. And in the 2011 Tree Register Handbook, the Guinness equivalent in arboriculture, Sir Harold Hillier Gardens had the highest number of champion trees in the British Isles. 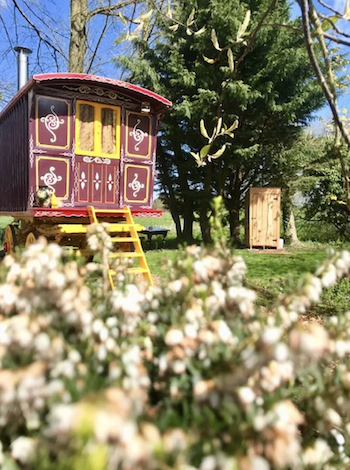 I stayed at The Meadow Glamping, twenty minutes’ drive away in Broughton, in a former showman’s caravan called Wild Billy’s, built around 1890, and for many years used as an authentic travelling gypsy’s home. During Wild Billy’s fairground days the Wagon was used as the backstop for the coconut shy (you can still see the dents in the wood if you look closely). He is now fully restored, and retired, complete with log-burning stove, and spends his days perched in bucolic beauty by (another) stream. Broughton has an excellent pub serving great food, The Tally Ho. We’re also near Stockbridge, which is even recognised by the locals themselves as being very ‘Farrow and Ball’ (the noticeboard outside the church I’m certain was Stiffkey Blue), itself worth a wander or a spot of lunch.

At The Meadow Glamping, there is also the option to stay in a barge or a lodge that opens out onto the lake, skimmed by several huge willows, surrounded by exquisite countryside and ducks (twelve last count) which are incredibly friendly, particularly if you’re armed with food.

On the last day, as if to send us off with a memory never to forget, a family of swans landed in the river as we were painting. Five grey signets and their parents, the dad hissing at us, despite the fact we were there first. It was an image like something out of Constable.

For more details on the Hampshire Art Studio and courses, including a new 6-month intensive ‘An Inquisitive Person’s Introduction to Art’, please visit www.hampshireart.studio and for more information on Fiona McIntryre and her work contact enquiries@holidaymillsgallery.com.