In these dark, dreary days in England, I like to replay my first moments at Castello Banfi il Borgo. The days prior my visit in Italy had, like this weather, been a little uninspiring and the Tuscany I had been travelling around yielded fewer gems than I’d hoped for. I was travel-beaten; sticky from the August heat and ill-tempered from weaving around cars on the drive from Monte Argentario.

As I entered Montalchino and made my way along the road, I caught a glimpse of the proud medieval castle at the heart of Banfi, sitting atop the hill surrounded by her riches, and the shiver of anticipation that coursed through me galvanised me with the energy necessary to concentrate on taking the little car carrying my load up the summit to Banfi.

Passing through the gates into the cobbled stones of the hamlet that comprises the hotel, I drank in the surroundings with thirsty eyes. The little restored stone houses that had previously been inhabited by those who worked at the Castello belonged in a fairytale; though their stony faces betrayed none of their history, they seemed inexplicably mysterious. Between the buildings also came bewitching sights; the vast vineyards that stretched out under the Tuscan sun, the glittering surface of the much-desired cold swimming pool, and the Castello herself – towering, watchful. 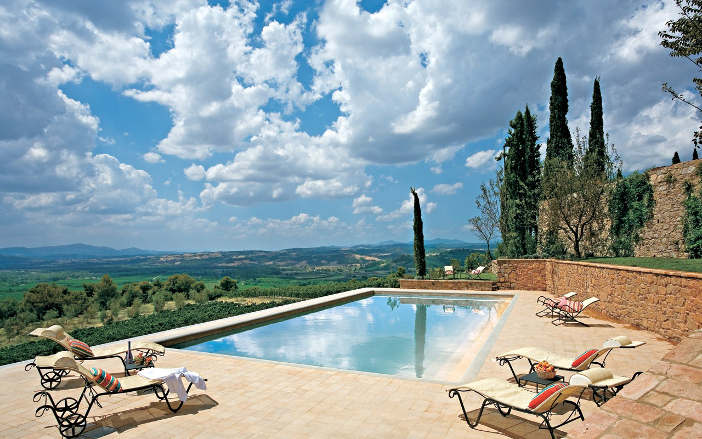 My welcome at the reception set the tone for my stay: I was greeted with a glass of fizz from the Banfi estate before being told I could rejoin the luggage in my room that had been whipped out of my hands on arrival. I sat and enjoyed the drink, before a guided tour around the hamlet culminated in a look at my room.

Room is perhaps an inadequate description for my accommodation at the Banfi. Series of rooms doesn’t do it justice, either. The first space I entered was a sitting room with a view of the vineyards and large dark wood desk which made me regret the decision to leave my laptop at home: no work could feel laborious in such opulence. My desire to knuckle down was quickly dispersed on finding the three mini bottles of wine made on the surrounding Montalcino wine estate.

Sipping at a light, fizzing glass of Banfi Brut, I wandered into the bedroom. It suited its surroundings: sumptuous, traditional, Tuscan. The bathroom had at its centre a large rain shower furnished with cosmetics also made from the estate’s Sangiovese grapes. A oenophile’s dream theme was beginning to emerge: at the Banfi, enjoyment of the vineyards’ produce is a prerequisite. As is a soft-focus, enchanted version of reality that is the result of the Tuscan wine and Tuscan sun. 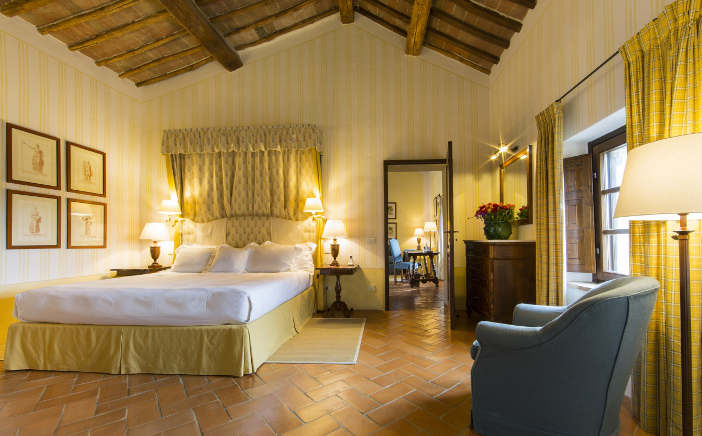 As I was so often charged with a glass of something spectacular at Banfi, it is a jolly good thing that ample seating is to be found everywhere: a towel-upholstered armchair in the bathroom (opposite the lavatory – the placing baffled me somewhat), benches in the cloister garden and, of course, armchairs surrounding the pool from which to take in the view of Val d’Orcia.

If you thought my thirsty eyes and mouth were sated by my afternoon, you’d be mistaken – dinner in the estate’s La Taverna called. Prior to eating, I headed over to the cocktail lounge for an exquisite hour of watching the sun go down over the Tuscan hills to the strains of jazz with, you’ve guessed it, a glass of the estate’s Brunello. Unmissable. The breakfast is, surprisingly, another highlight of the Banfi experience, given that the hotel consists of only 14 rooms, the varied spread was hugely impressive.

After eating, filled with sadness at the prospect of leaving, I weighed down my car with a little of Banfi to tide me over – some Brunello from L’Enoteca and Salsa Etrusca balsamic vinegar from the estate’s Balsameria. Before leaving Banfi, I looked back at the winding road I’d ascended with such hope. I would drive down it rich with memories of my evening under the stars in the hamlet that is now a hotel and I felt the same shiver of anticipation I’d felt prior to arriving. This time, I shivered with excitement at the idea of returning.