They call it the Venice of the north, but from where I’m sitting it looks more like Paris. I’m on the roof of the Kempinski hotel in St. Petersburg in the sweltering heat. Sunshine and warmth isn’t something you usually associate with Russia, which more commonly conjures visions of sub-zero vodka and weather to match, or Doctor Zhivago and snow-covered pale blue palaces that look even more brilliant above a blanket of bright white.

I feel like I’m cheating the system getting to enjoy St. Petersburg bathed in golden light, experiencing her nightless summer days through a rose-tinted lens very few are fortunate enough to see. It’s 10:30pm and the sun is still high in the sky. I’d come to St. Petersburg during the magical White Nights of midsummer, when the sun barely sets and the city is diffused in soft and sensual Impressionistic light. The air is warm and the view is wide. Swallows squawk overhead. From my vantage point I can see the glinting golden dome of St Isaac’s Cathedral in the centre of the city, and the expanse of never-ending aqua that is the Hermitage – one of the largest museums in the world. 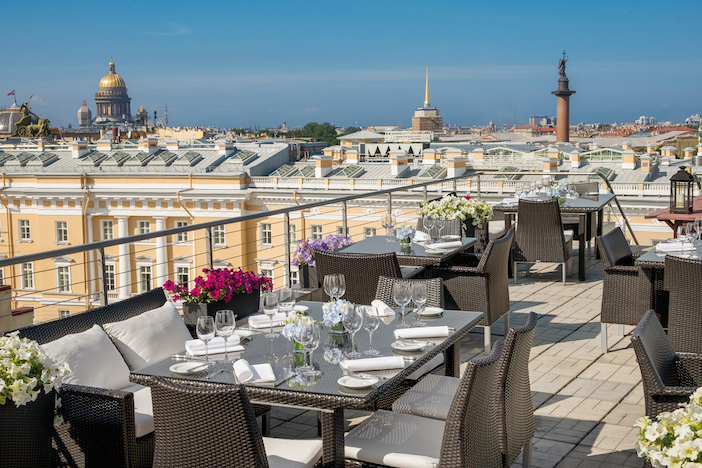 St. Petersburg’s maze of canals draws the comparisons with Venice, with its main artery, the Neva never far from view. By 11:30pm the sun has dipped and appears to be flirting with the lilac horizon. The moon has begun its noble ascent and the sky is now an opalescent palate of pale pink, white and peach. Clinging to the sky in a bid to avoid sinking into the earth, it’s as if the sun fears it will never rise again. The city’s golden domes oxidize with the setting sun and at midnight an eerie luminosity sets in. It is neither night nor day, and so it stays, fooling the eye into a hypnotic trance as one dawn follows another with barely an hour of night, leaving you in a state of dreamy delirium.

Overlooking the Moika river a precious stone’s throw from the Hermitage, the 200-room Kempinski Moika 22 lies in the city’s beating heart. Playing on the hotel’s riverside location, many of the rooms have a nautical theme and are decked out in red, white and blue. The jewels in the Kempinski’s crown are two executive suites prettified with Ralph Lauren bedspreads, wrought iron chandeliers, fine art and antique furniture. My mother and I were given a room with a view overlooking the elaborate teal façade of the Hermitage. The nautical theme stretched to the curtains, which boasted charming sketches of navy blue boats; and a black-and-white framed photo of a sailboat slicing through the ocean. Our beds meanwhile, were impossibly soft, making them hard to leave, while goose-down pillows were fluffy and bathrobes stately. A special menu allows you to order bespoke pillows and Occitaine bath products, which are whizzed to your door within minutes. Cue midnight deliveries of scented candles and lemon verbena massage oil. 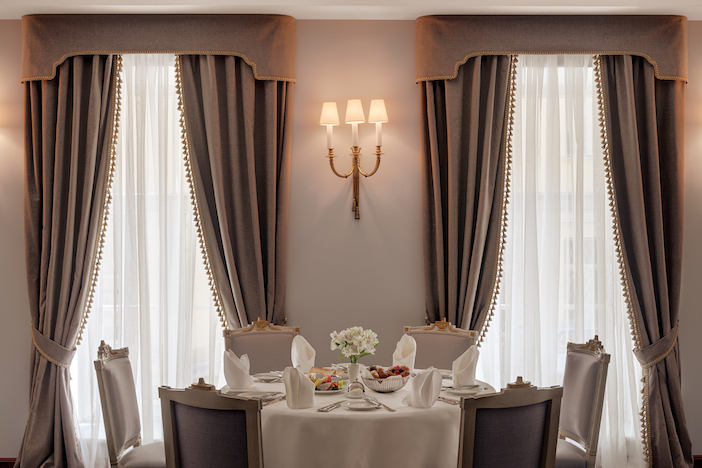 Breakfast at The Kempinski is a grand affair and taken very seriously. With a pianist playing in the atrium, one begins in the tasteful grey dining room of the Beau Rivage with Ruinart Champagne and is encouraged to feast like an oligarch on Russian pancakes stuffed with salty globes of burnt orange salmon roe, perfect pastries and Eggs Benedict. Afternoon tea meanwhile, is taken at 5pm, when vivifying Assam is served in Imperial Russian porcelain alongside discs of foie gras and apple jelly, mini opera cakes and heavenly homemade praline macaroons.

At the helm of the hotel’s main restaurant, the Bellevue Brasserie, is 28-year-old head chef Christophe Laplaza, formerly of Gordon Ramsay au Trianon at the Trianon Palace in Paris. Offering jaw-dropping panoramic views of the city taking in Palace Square, St Isaac’s Cathedral and the Hermitage from its light and airy dining room at the top of the hotel, Laplaza’s modern French dishes have a Russian accent. We begin with an ideal apéritif for a scorching summer’s day blending limoncello with lime sorbet, lemon juice, lemongrass and sparkling wine. A carafe of unctuous Joseph Drouhin Laforet Chardonnay 2012 pairs perfectly with my decadent starter of burrata and honey, while an inky bottle of Christian Moueix Pomerol 2009, all blackcurrants, plums and spice, proves a fine dining partner for Laplaza’s tangy twist on beef stroganoff, the recipe for which is kept a closely guarded secret. 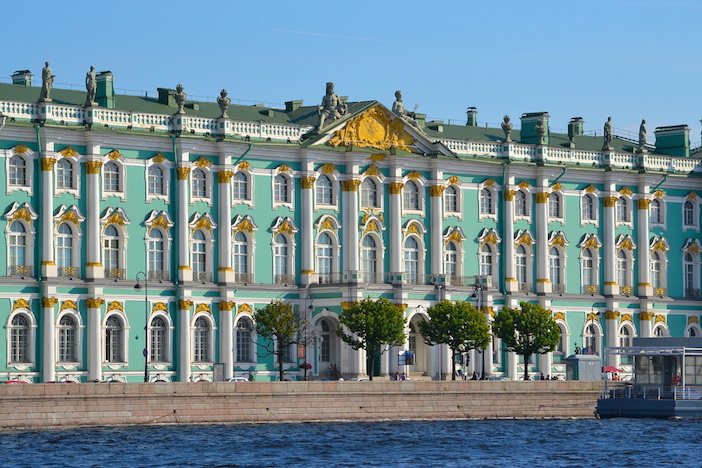 For a city with such a bloody past, St. Petersburg wears its scars well. There’s a majesty about the place, like it’s forever dressed in its Sunday best. The Hermitage in Palace Square is a feast for the eye and mind. It’s so gargantuan, I’m surprised you don’t need a visa to get in. To do it justice would take weeks, years even. Its halls are decked with every artist under the sun, from Monet and Manet, Gainsborough and Gauguin, to Picabia and Picasso. The building itself is a thing of beauty, all pale blue walls and Rococo swagging. Legend has it that author Vladimir Nabokov frequently had sex with his young lover Tamara in quiet nooks of the museum among scarabs and sarcophaguses.

At the ugly end of the city lies a diamond in the dirt: St. Nicolas Naval Cathedral, one of the most breathtakingly beautiful buildings I’ve witnessed first-hand. Powder blue and white, with golden domes that come alive in sunlight, angels keep watch atop Corinthian columns. Inside, the smell of incense is thick and the atmosphere one of hushed reverence. Heads are bowed and thoughts deep. Close to the Kempinski, the Church of the Saviour on Spilled Blood was built on the spot where Tsar Alexander II was assassinated. Its turquoise, green and white tops twist into the sky like sweets in a building that has seemingly sprung from the imagination of Willy Wonka. The most successful reformer since Peter the Great, the same Tsar is responsible for the creation of rappers delight, Cristal. Fearing assassination, Alexander II asked Champagne house Louis Roederer for bottles of his favourite fizz to be crafted from clear glass with a flat base in a bid to avoid being poisoned by his enemies. His plan worked, though he was killed in 1881 by a bomb thrown at his carriage by a member of left-wing terrorist group, The People’s Will. 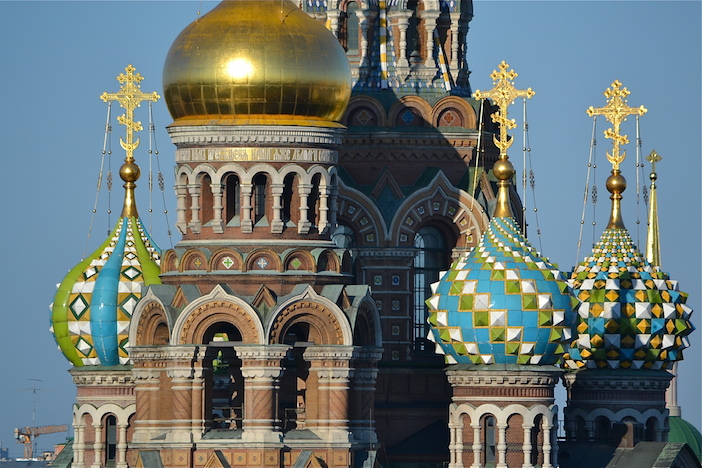 A city of power and glamour, St. Petersburg seems trapped between the past and present, tradition and modernity, savagery and order. Classical in structure, with its squares, canals, bridges and cathedrals, walking around, it’s hard to believe you’re not in Europe, though just over 300 years ago the city was swampland off the Gulf of Finland. A vision of epic grandeur audaciously realised, Peter the Great founded the city in 1703. Home to Faberge, Trotsky, Pushkin and Nabokov, whose house is carved from pink granite, St. Petersburg serves as an elegant gateway between Russia and Europe. The city has a Baroque heart and more pastel paintwork than a little girl’s bedroom. At around 1am every night, the bridges in the city are raised, separating the main chunks of the metropolis. During the winter the Neva freezes like iron, but how far away that reality seems tonight as I perch on the window ledge in my room, knees to my chin, watching the boats drift under a nearby bridge and couples trickle out of the Hermitage, making their way, arm in arm, through the limpid silver twilight.