Trending
You are at:Home»The Explorer»Hotels»Stoke Place
By Jonesy on May 23, 2012 Hotels

“Are you going to pull up at the front of the house this time, dearest?” enquired Her Ladyship, clearly recalling my inappropriate arrival etiquette at Hartwell House where I’d made the faux pas of carrying our bags all the way from the car park like some sort of gorilla with a luggage fetish, rather than stopping outside the house and allowing the porter to do the job for me.
“Yes dear,” I chirped, as the car burbled along the gravel driveway and came to a standstill beside the front door. A sprightly chap appeared from within to greet us.
“Are you going to give him your keys so he can park the car for us, dearest?” asked my lady.
I took one look at the young cove, decided he’d never handled such a powerful motorcar before in his short and sheltered life, and muttered darkly, “No, I think not.” You can take my bags, but you’ll have to pry the keys out of my cold, dead hands if you want to drive my car! 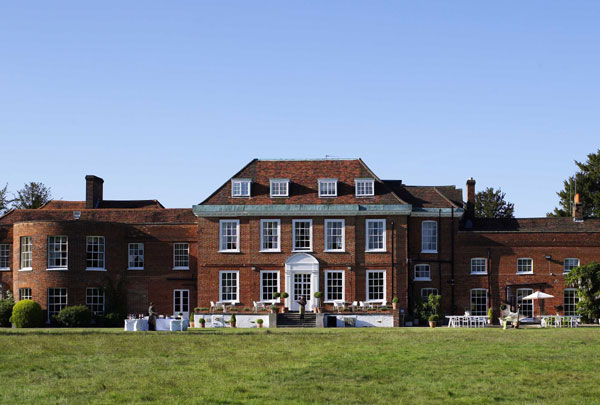 Set within appealing Capability Brown grounds, Stoke Place was built as a family residence in 1690, and little did they know that one day an enthusiastic hotelier would fill an entire wall with empty picture frames, paint the staircase a duck egg blue, and install double-hammocks in the garden for guests to swing away to their hearts’ content. In fact, I think the original family would be rather pleased with the transformation. The interior design enhances the elegant and traditional features of the house, while completely updating and contemporising them – no easy feat and one achieved with aplomb in this amiable country manor.

We made our way to one of the garden suites to be our home for the night, featuring a four poster bed (just four posts, but curiously no top), a cavernous shower and a roll-top bath in the ensuite, and modern dark wood and leather furniture scattered about the place. The room was certainly cosy enough to nest in for the entire day if we were so inclined, but we didn’t want to miss the sunshine or the chance to explore the charming surroundings, so we toddled out for an afternoon romp around the garden and grounds.

The fishing lake is a very pleasing sight, and after walking the short circular tour through a spot of woodland around the lake and past the giant garden chess set, we eventually came upon one of the two-person hammocks in which we reclined for the rest of the afternoon, swaying serenely back and forth (serenely until, that is, Her Ladyship ‘rocked the cradle’ rather enthusiastically and nearly catapulted us into the lake – at which point I resumed rocking duties in order to avoid an impromptu bath in the murky water). As the sun slowly receded behind the horizon, it was time to start thinking about dinner… 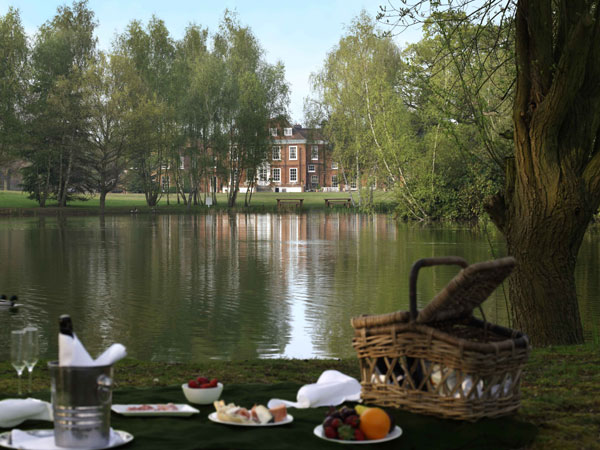 The Garden Room restaurant is overseen by Head Chef Craig van der Meer, a South African who, according to the blurb, ‘serves bold, molecular-inspired versions of country house fare’. The dining room is small and romantic, with stripped wood and low lighting; the well spaced tables afford a certain degree of privacy despite the room’s size. The staff proved competent and helpful, if a tiny bit austere under the beady-eyed gaze of the fresh-faced maitre d’.

A starter of rolled rabbit loin with yellow beetroot and bacon emulsion was dainty and tasty and not what I expected. Her Ladyship’s scallop carpaccio with crab, roasted pineapple and a sweet soy reduction was a challenge to the taste buds; by that I mean the ingredients were of a high quality and presented beautifully, but we weren’t sure if we liked the flavour combinations.

A main of dukkha spiced venison loin with Jerusalem artichoke, red cabbage and Amarula jelly was lekker (I apologise now for using South African slang in this paragraph), although the quantity of meat somewhat outweighed the carbs on the plate, but then the chef is from SA so we can forgive the oke for that. My bokkie’s black sesame-crusted monkfish with chorizo mash and sauce vierge was sensitively cooked and demonstrated that the kitchen brigade have the competence to create whatever they like to a high standard, even if it does sometimes push the mokoro a little far away from the shores of subjective culinary safety now and then. 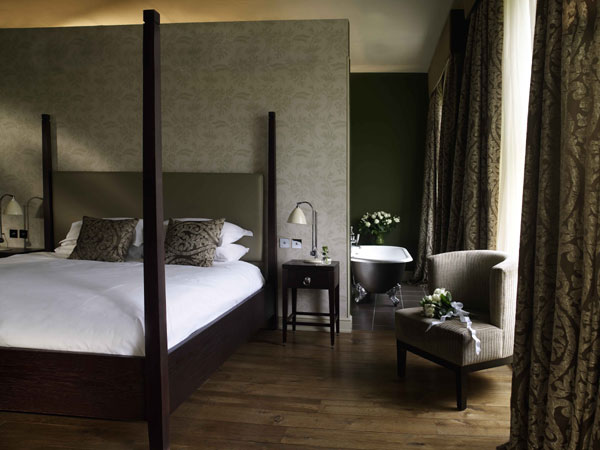 Dessert was rather strange; a blueberry cheesecake ‘pebble’ with blueberry jelly, green tea granita and pistachio sponge. I can’t say that I enjoyed any of the textures or flavours of this dish. Her Ladyship’s peanut butter opera with roasted banana ice cream was a bigger hit. To summarise this dining experience: expect the unexpected. Some of it works, some of it doesn’t. You certainly won’t have a boring meal.

The next morning we were treated to a hearty breakfast in our room while watching the rather charming House on Haunted Hill on the large television opposite the bed. Her Ladyship enjoyed the scrambled eggs with smoked salmon so much that she polished off the entire plate, while I dug into my full English, trying not to think about all the calories and instead relishing in the quality ingredients. No culinary funny business with this breakfast.

By the time it came to checking out, I was so relaxed and in such good spirits that I’d have gladly let the young rotter at reception drive my car wherever he liked. In fact I might have encouraged him to put his foot to the pedal and to have some fun, perhaps drive it into the fishing lake with a giant chess piece strapped into the passenger seat. And if I’d been swaying away in one of those two-person hammocks at the time (with Her Ladyship using me as her pillow and Royal Hammock Rocker), I’d have been so reposed that I dare say I wouldn’t have noticed a thing.