There’s a lot to be said for staying in a new hotel. Not even one that’s been refurbished, but a new hotel.

The property at Corales Beach, part of the Royal Hideaway range from the Barcelo Group, opened last year. We were there barely three months after it opened. Even from a distance it gleamed, lit up beacon-like as we wended our way along what felt like similarly newly-constructed roadways to reach it.

Rising from the burnt landscape around it, the Royal Hideaway is anything but hidden. In contrast to the traditional terracotta that makes up the island, it’s a striking lozenge of moulded concrete, Bauhaus-meets-Buck Rogers in brilliant white. Inside, its lobby, hewn into rock, is a study in striking, contemporary architecture. Unrendered concrete bridging cleaved stone, unblemished glass and a polished floor with the sheen of an ice rink. To off-set the feeling of entering the underworld, water courses surround tiled walkways and, most striking of all, seascapes, abstracts and even a burning caldera are projected onto a huge wall of rock. And all of this before we entered our suite. 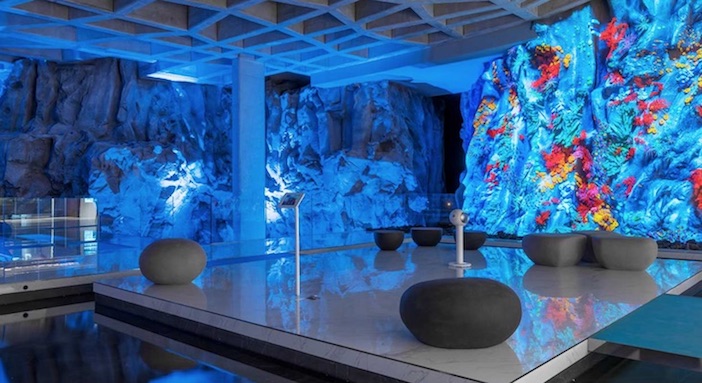 “Blimey, there’s even washing machine and dryer,” Mrs L exclaimed. I popped open a cupboard in the kitchen; it was fully stocked with crockery and glassware. The same for the drawers for cutlery and utensils. And it’s not even self-catering. “How many nights are we here?” she asked, “Can we not just move in? Rethink that?”

As we arrived the sofa bed was already made up for the little one. While she bounced merrily on the plumped cushions, initial reservations that the open plan to the main bedroom with nothing but a TV wall dividing us were soon reprieved when I noticed sliding partitions that separate the spaces. Nice touch. Even the gossamer-white curtain separating the bed from the futuristic bathroom sounds concerning but it’s not unusual to have baths and basins in the bedroom and, naturally, the more private enterprises are certainly done behind closed doors.

I drew the blinds running the length of the apartment to reveal the massive balcony and then landed my first touch of envy. I looked over the side to see the private pools to the suites one floor below. Those would be the ones you’d request when you’re staying here. But at least we had the advantage of height. Panoramic views across the property; the pool, the terraces, the gardens and the sea just beyond. It was night but we got the sense of it and I could tell it would be spectacular to wake up to in the morning.

And it was. Tenerife is otherworldly. Beyond the boundary of the hotel, whose gardens are in keeping with the volcanic landscape, the topography looks more lunar than anything earthly bound. As the Atlantic broke on the beach below us, the white surf on the black sand made it look monochrome. Venturing to breakfast we saw our position from the other side and the spectacular mountain – volcano, even – backdrop that, at that hour, was draped in a translucent mist that filtered the sun’s rays creating a heavenly nebula. 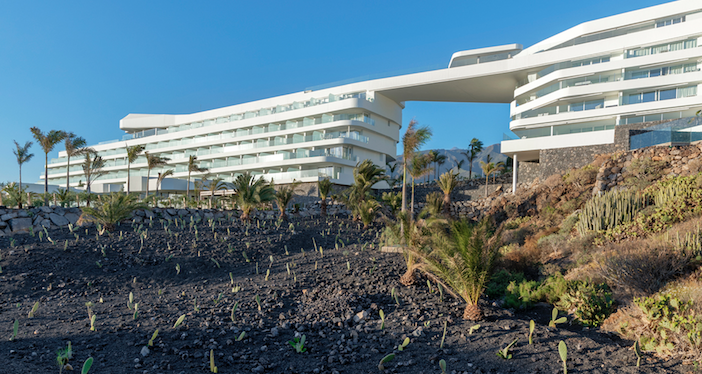 The interstellar similarities don’t end there. The near-barren, rocky landscape, mountainous topography dotted with banks of apartments and residences creeping up the hillsides make it look as if we’d colonised Mars. To drive through nearby Playa de las Americas, you’d think we had. Nothing about it seemed everyday. The entire town is geared towards tourism. You may think that obvious, and indeed I’d heard as much, but anecdote and supposition don’t prepare you for the reality. It is, after all, blessed with almost year-round sunshine and the cobalt blue Atlantic, and is served by countless low-cost flights, tour operators and properties to suit every taste and budget just twenty minutes from the airport. It’s the side of the island that gives Tenerife its reputation; the opposite to the quiet, cultured north.

The Royal Hideaway Corales Resort is, thankfully, hidden in a sense; set away from the maelstrom, so benefits from the pleasures Tenerife has to offer, without the trappings of mass tourism.

Literally split in two, by the adult-only ‘Beach’ and family friendly ‘Suites’, it’s beautifully, tastefully appointed. Space-age design and our aforementioned suite aside, there are some delightful perks; the ability to park the little one in the kids’ club for an hour to enjoy a sundowner on the roof of the adults’ bar and a la carte restaurant, Maresia, the charge of the Michelin-starred Padron brothers. While half board limits you to the buffet, it’s not one to be sniffed at, where every dish on offer could easily pass for an a la carte option, and hot food is cooked to order.

There are, too, cafes and culture, with Alice promising ‘Coffee and Dreams’ and a shopping parade that even features an art gallery. Perhaps the pinnacle on the family side, however, aside from keeping our four-year old amused for hours with planned activities in the kids’ club, was the gelateria. Now, how many hotels can claim to have their own ice cream shop? 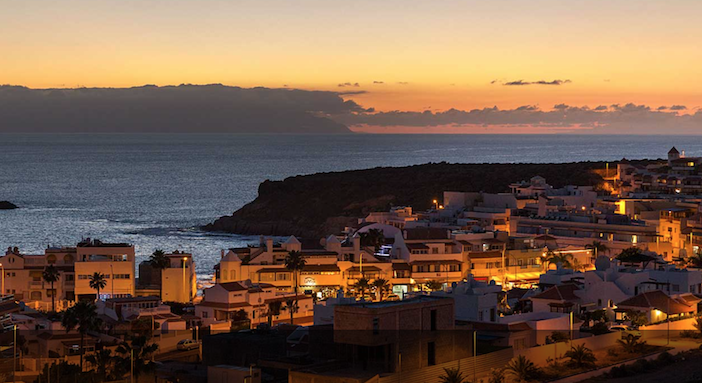 But the benefits don’t end there. Watersports, helicopter tours or even a more daring option for a bird’s eye view being paragliding onto the beach, bring all the vibrancy you might wish for on a Tenerife holiday. But we sought solace, and found it, simply, in the setting.

In front of the hotel, and hugging the shoreline, is the delightful La Caleta, one of the island’s fishing villages that still retains its original charm. With a raised promenade decked with cosy restaurants and sleepy tavernas wrapping around its small harbour, and views across to the island of La Gomera, it’s perfect for a sunset stroll; a taste of traditional Tenerife to compliment the contemporary perks of the hotel.

We were indeed well hidden at the Royal Hideaway, after all. And, for that matter, treated like royalty.

The Royal Hideaway Corales Suites is part of the Barcelo Hotels Group. For more information about the property, including activities and special offers, visit www.barcelo.com.