Even if you’re a well seasoned luxury traveller, it’s not everyday that you stay in the very heart of a UNESCO World Heritage site. The Royal Crescent Hotel in the genteel city of Bath, renowned for its honey-coloured Georgian architecture and Roman Baths, boasts 45 individually designed rooms and suites, offering the unique opportunity (short of purchasing a property) to spend the night in what is regarded as one of the most beautiful architectural landmarks in Europe. Designed by John Wood, the Younger, the thirty townhouses of the Royal Crescent were built between 1767 and 1774, with many having been divided into countless flats in the subsequent years. 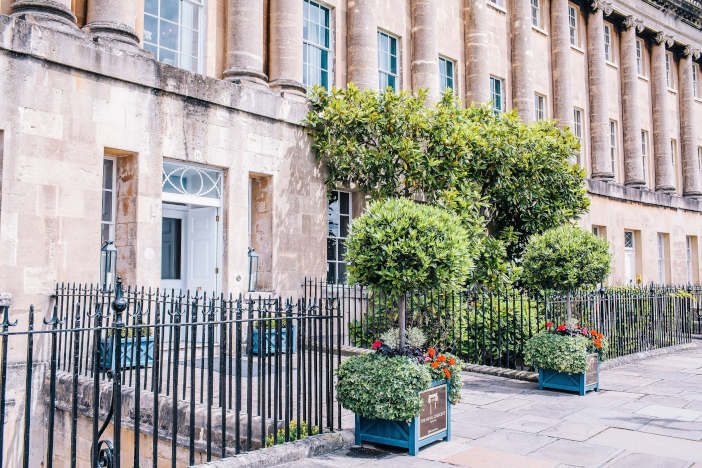 This makes The Royal Crescent Hotel experience all the more rarefied, with a lavish interior retaining the majority of its original architectural features. In 1971 the centrally positioned No.16 (which had become a guesthouse) combined with No.15, and following a renovation and the addition of further rooms in the pavilions and coach houses within the garden, became The Royal Crescent Hotel, still regarded, after several owners in the intervening period, as the most prestigious luxury hotel in the city.

Located at the top of an impressive staircase that wouldn’t be out of keeping in a John Singer Sargent portrait, we were ushered to one of the hotel’s signature suites, the palatial Duke of York apartment furnished in tranquil powder blue and named after its most famous resident, Prince Frederick, Duke of York, the favourite son of King George III and the ‘Grand Old Duke of York’ of the nursery rhyme, who visited Bath in 1795 to attend the opening of the Pump Room and received the Freedom of the City. The Duke and Duchess returned the following year and purchased the Crescent’s central house for an eye-watering £5,000. 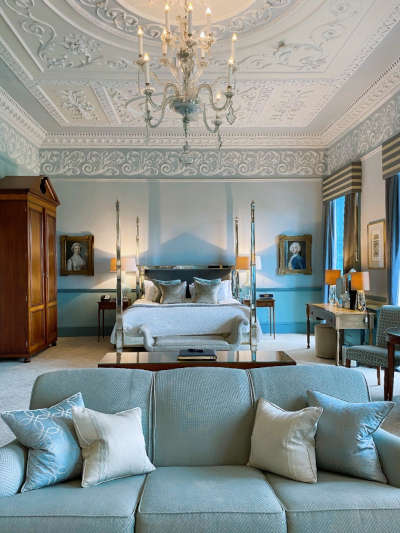 The suite that bears his name features four full length sash windows with views over the Royal Crescent lawn, to be enjoyed from the mirrored four poster king size bed or the elegant sitting area with its original Georgian fireplace and well stocked bookcase – but in reality you’re more likely to spend your time looking up to admire the elaborate plasterwork ceiling and ballroom-worthy chandelier than looking out of the window! Even the open four poster bed has been cleverly chosen to ensure you appreciate and become sufficiently immersed in the wonders of this heavenly chamber, so much so that you may get distracted from the city’s other historic gems. It’s only natural to feel a pang when missing a moment of this suite, but fortunately you don’t have to venture far to take in some of Bath’s loveliest sights.

Many of my favourite places are within just a five minute walk of the Royal Crescent Hotel: No.1 Royal Crescent, a museum located at the beginning of the sweeping terrace, offers a fascinating glimpse of Royal Crescent living when the properties were first inhabited by the fashionable ladies and gents who came to the city to take the waters and enjoy the elegant society of The Pump Room. For a more modern form of entertainment, head to the 18-hole Victoria Falls Adventure Golf located in Royal Victoria Park – the prettiest miniature golf and just as appealing to couples on a romantic break as it is to families. 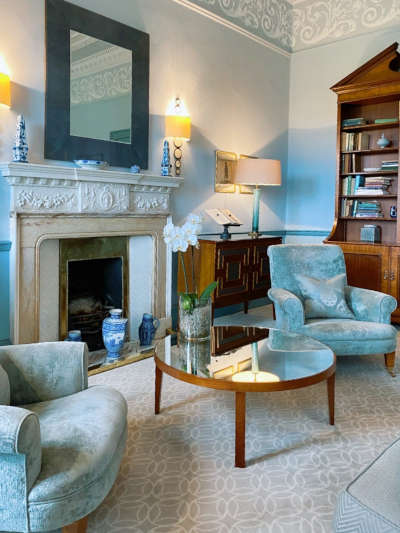 For a well earned refreshment (at the expense of the losing golfer naturally) head to the pedestrianised Margaret’s Buildings, a charming double sided flag-stoned street that is a hub of independent shops, cafes and restaurants. It’s the perfect place to catch your breath before it’s firmly taken away again on reaching The Circus, the magnificent architectural sister to the Royal Crescent designed by John Wood, the Elder. Further culture fixes can be found at the nearby Museum of Asian Art, Assembly Rooms and Fashion Museum – making sure to return to the hotel via the Georgian Garden – a secluded (and completely free of charge) haven in which to pause and admire the authentic period landscaping.

But talking of secret gardens, The Royal Crescent Hotel’s own one acre city oasis is the secluded space I love best, especially in the summer months when everything from a breakfast of smoked salmon and scrambled eggs with caviar to a traditional afternoon tea and all day dining makes a blissful al fresco extension of The Dower House restaurant and bar. Not only is the garden beautifully landscaped, and enjoyed by resident hedgehogs, a series of modern sculptures by local artists offers further interest, as the colourful plants and flowers evolve in their midst.

There is also a lovely private garden belonging to the hotel’s luxury Spa & Bath House – a discreet spot for those of us not comfortable strolling about publicly in our white towelling robes and slippers. In keeping with the original concept of visiting Bath for health and wellbeing, The Royal Crescent Hotel is one of the few city spas to boast its own indoor heated swimming pool. And after a morning’s sightseeing nothing could be more pleasurable than some downtime in the ‘Relaxation’ or ‘Vitality’ pools and Sauna, followed by an Elemental Herbology facial or a Five Element massage that will leave you positively radiant for your romantic dinner. 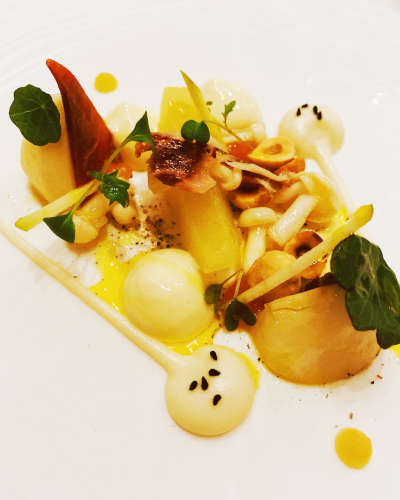 Further pampering takes the form of fine cuisine, and following the appointment of new Executive Chef Martin Blake, the Royal Crescent Hotel is creating a buzz with food-loving visitors and locals keen to sample the forefront of British cuisine. The taste for splurging out on a gourmet experience has certainly never been keener judging from the number of covers in the restaurant midweek. We sampled Blake’s 6 course seasonal tasting menu with highlights including Jerusalem artichoke salad with Tunworth cheese and a mushroom tea to be sipped alongside, and a main of Salisbury venison with red cabbage, parsnip, Valhrona chocolate and a venison jus. The sensational finale offered a modern take on a nostalgic flavour pairing, a perfectly set custard tart with poached rhubarb and rhubarb sorbet – a dessert that sums up the experience of The Royal Crescent Hotel, marrying the best traditions with 21st century luxury.